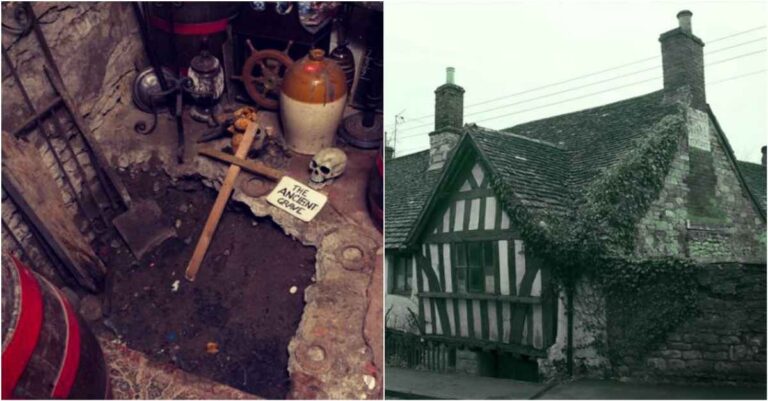 The Ancient Ram Inn, in Gloucestershire, England, is one of the most haunted inns in Britain. It is 900 years old and all that history comes loaded with tales of the paranormal. Numerous ghosts have even refused to check out and reside in its halls to this day. In other cases, some of the guests even flung themselves out of the windows in hopes of escaping the horrors of that place.

The inn is located in the Wotton-under-Edge village, and legend has it that it was built on pagan ritual grounds in 1145. Many people believe that this disrupted the souls of those buried underneath. The site was initially used to house the local St. Mary’s Church’s clergy. Over time it was passed down to multiple owners until it was turned into an inn in the early 20th century.

The owner, John Humphries, is also a long-time resident of the Ancient Ram. He admitted to the Daily Mail in 2013 that, “the whole house is absolutely terrifying.” On his first night at the inn, he was dragged out of bed and flung across the room by a spirit. Humphries’ three daughters and wife moved out of the house because of the haunting experiences they went through.

Many of the ghosts which haunt the inn are actually well-known visitors and are known by name. Rosie, for instance, is the ghost of a girl who was killed in the inn. She was the innkeeper’s daughter and was found hanged in the attic. The Witch is another spirit killed at the inn. Supposedly the Witch used the Ancient Ram as her safe house before she was dragged out and burnt at stake. The Romanian Centurion is another ghost that surprises guests staying at the inn. At times, he even attacks them.

The Bishop’s Room is notably the most haunted room in the house. Nine different ghosts have been spotted in that room alone. Encounters such as disembodied screams, strange colors and mists, and shadows are often spotted there. A shepherd is surprisingly one of the most faithful ghosts in that room.

Visitors who stayed at the inn claim to hear the sound of children crying at night. The innkeepers even started putting out toys to keep the children’s ghosts happy. While renovating the house, the Humphries found daggers and small bones. They believe that they belong to a child sacrifice carried out to the Pagan gods.

Most of the people who visit the inn are tourists who wish to capture paranormal occurrences. Beams of light, shadows and strange orbs have all been seen and captured at the Ancient Ram. Footsteps, slamming doors, odd noises and the occasional “get out” can also be heard.

One of the more popular theories of why the Ancient Ram remains to be one of the most haunted places in Britain is because of “ley lines.” These are roads upon which spiritual energy travels and apparently, from Stonehenge there are ley lines that intersect at the Ancient Ram Inn.