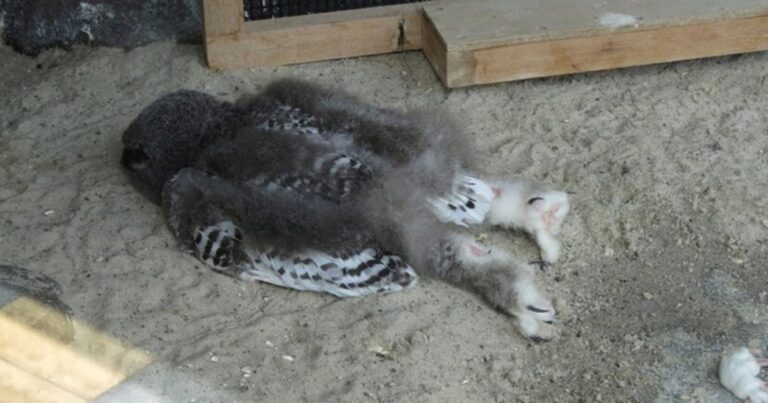 Everyone is born with a head that’s slightly too big for our bodies. Usually, this means that babies can’t support their weight for the first few weeks of its life. However, we typically don’t think that this extends to the animal kingdom. While this is certainly the case for many animals, it’s baby owls that take the cake with how adorably they deal with it.

Though adult owls stand up when they sleep, the weight of a baby’s head makes this almost impossible. As a result, they sleep face down for the first few weeks of their life. Naturally, this has sent Twitter ablaze with people just finding out that this is the case. What started off as one picture has since become a conversation about whether or not it was real.

The photo itself shows a baby owl asleep in the position in some form of captivity. Naturally, this led to many people wondering whether or not the owl itself was actually alive, as they couldn’t believe that it would sleep face down. As more pictures of baby owls sleeping made their way across Twitter, however, it soon became obvious that this is a natural thing.

The supposed controversy around the picture prompted the National Audubon Society to get involved. In an article, the non-profit notes that baby owls sleeping somewhat like a person has been observed across the world. As such, the environmental conservation organization highlighted that it wasn’t just a theory, but an observable fact.

In the article, the National Audubon Society explains precisely how baby owls sleep without falling from a tree. While laying down is one of the more notable ways that they do so, there are a few other methods to it. Regardless, the fact that they can sleep on their stomach like a person continues to have the internet hooting.