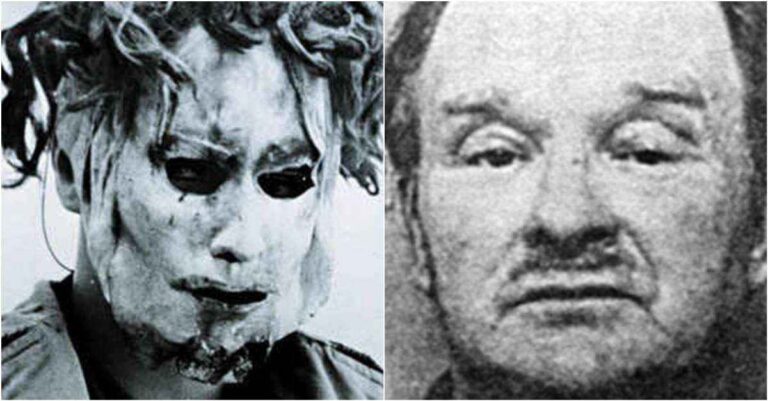 The Real Life Boogeyman, Edward Paisnel, was convicted for 13 counts of assault, sodomy, and r*** (many do claim over 100 assaults by him nevertheless) and was given a 30-year sentence. However, he was released only 19 years after, on account of being a “model prisoner”. He moved away from Jersey soon after since the people there weren’t exactly welcoming of his presence. He died on a nearby island in 1994. Here is a list of chilling facts about “The Beast of Jersey” that you never knew.

[*] His hunting ground was pretty small and remote. He tormented the Jersey Island, an island less than 45 square miles and consisting of about 100,000 inhabitants in a single town, Saint Heller.

[*] Commonly known as the ‘The Beast of Jersey’, Edward Paisnel gave this name to himself in a letter he sent to police. This was in an 11 year period in which he would disguise himself in a costume with clearly self-engineered bracelets of cloth with some nails sticking out, a rubber mask, and a wig and then went into homes late at night then proceed to r*** his target. Here’s a picture of his actual costume:

[*] Following that, a mother and daughter fell victim to this notorious man late night. According to this excerpt from the True Crime Enthusiast site:

In March 1960, a 43-year-old mother and 14-year-old daughter in a fairly isolated cottage in the St Martin parish underwent a horrific experience. The mother was awoken at about 12:30am by the telephone ringing downstairs. She went down to answer it, but when she lifted the receiver heard nothing but a click and then the dialling tone. She went back to bed but was awakened about an hour later by a sound downstairs. She started downstairs to investigate, but as she reached the bottom of the staircase the lights abruptly went out and she heard someone in the living room moving about. In the dark, she made for the telephone to call for the police – but the phone lines had been wrenched out. Then, she was confronted by the figure of a man who grabbed her and demanded money. He was very rough with her and threatened to kill her, but left the woman immediately when he heard the daughter coming down to investigate the commotion. The woman took the chance to flee and raise the alarm at a nearby farmhouse, and upon returning to the cottage found her daughter – she was still alive but had been horrifically raped in the now familiar signature.

[*] His initial attacks were on four women just a few months apart, all young and all around the bus stop either walking home or waiting. He would put a rope around their neck, and force them by the neck to a field nearby where he would then beat and r*** them. Later on, he started attacking older women, even boys. On 14th Feb 1960, he broke into a boy’s bedroom and watched him sleep. As soon as he awoke, Paisnel put a rope around his neck, forced him out through the window and into a nearby field where he then raped him.

[*] He was imprisoned in WWII, being caught for stealing food for the starving families in his community.

[*] Not too much after, two (separate) boys were his new target. As usual, he entered their residence at night, forced them out with a rope around their neck and raped them.

[*] One way the police managed to link the different attacks to one individual was that each victim mentioned that the attacker had a very distinctive distinctive “musty” smell.

[*] Joan, his wife, mentioned that he once dressed up as Santa Claus and visited the community home to spread “spread holiday cheer.”

[*] Another 14-year-old girl was almost about to be just another victim. She awoke in her bed to find the masked man staring at her, but upon her screaming in fright, he ran away immediately.

[*] He used to volunteer at community homes. So much in fact, that it came to a point where the children called him “Uncle Ted,” but would loathe him. “Uncle Ted” would sneak in to their rooms, and as usual, stare at them sleep and even crawl into the crawl spaces. He would also abuse (sexually and physically) the staff and the children.

[*] Right after this letter, his attacks followed. However, this pattern had an ‘upgrade’. Now, his targets had strange punctures in their skin, weirdly parallel with regular gaps. (Later, police figured this was the cause of the nails in his “uniform”).

[*] The island community got concerned about the activities and his actions, and reached out to the Scotland Yard for help. Because of this, the beast of Jersey took a 2-year long break from stalking his prey. But right after, he returned and ruined 4 more children’s’ lives, and went back underground for another two years.

[*] During his break, he wrote a letter to the police, teasing and taunting them. It was in this letter that he gave himself the now well-known nickname. The letter went as follows:

I think that it is just the time to tell you that you are just wasting your time, as every time I have done wat I always intended to do and remember it will not stop at this, but I will be fair to you and give you a chance. I have never had much out of this life but I intend to get everything I can now…..I have always wanted to do the perfect crime. I have done this, but this time let the moon shine very britte in September because this time it must be perfect, not one but two. I am not a maniac by a long shot but I like to play with you people. You will hear from me before September and I will give you all the clues. Just to see if you can catch me.
Yours very sincerely
Wait and See

[*] He and his wife took in orphaned children from the community.

[*] Even after he was convicted and charged with the crimes found guilty of, people insist he has done way more. Children of the community homes mentioned that he regularly used chloroform as a sedative and snuck them out of their rooms.

[*] After raiding his house, the police found a secret room in which he had further equipment for his uniform, photos of homes in the area and a sword.

[*] In 1971, the beast of Jersey was ultimately caught by accident. Because of an unrelated murder, a traffic stop was set up on the road. As Paisnel approached the police stop, he assumed the police were finally on to him. He freaked out and drove off immediately, starting a car chase which eventually ended with police catching him in the vehicle he had stolen for another one of his crimes. In the car, they found his signature cords, black wig, rubber mask and “pointed sticks. On top of that, Paisnel was caught wearing his murder uniform: old raincoat with nails through the shoulders together with his nail. He had a flashlight, but he had taped it with black tape to cover the majority of the bulb, giving off a thin, controlled stream of light.

Sickening! Truly, sickening! It calms the heart to know that such a deplorable individual is no longer alive and well among us. Well, now you can find a new addition to your list of “favorite” serial killers.