Freaked DISCOVER THE ART OF PUBLISHING
Home Creepy Crazy Facts About Devils Hole, One Of Earth’s Most Mysterious Places 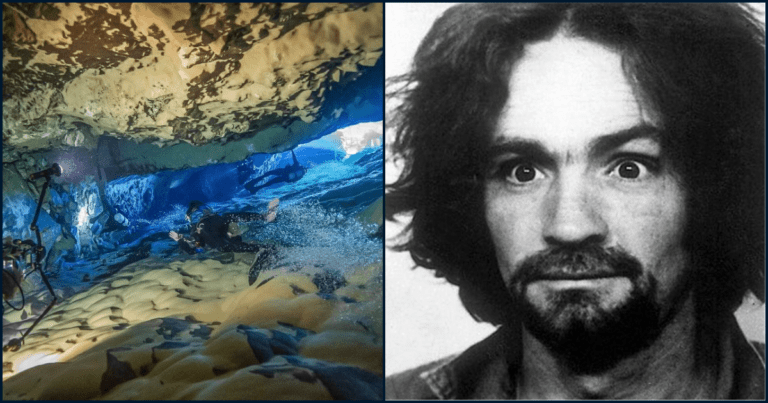 The world is filled with controversial, mysterious, and downright messed up places, but it’s extremely rare that something comes under all three categories, until now.

Located in Nevada, Devils Hole is a geologic formation home to its own species of fish that cannot be found anywhere else in the world, the pupfish.

Due to their habitat, Devils Hole Pupfish are listed as endangered, and back in April of 2013, the underwater creature was estimated to have around 35 left in existence. Another test just 5-months later saw the fish increase in numbers almost double at 65. Although it is unclear how many remain, the species is still thought to be on the verge of extinction.

Alongside the wonders of the Devils Hole, there’s also bad… A lot of bad.

In 1965, two divers by the name David Rose and Paul Giancontieri snuck into Devils Hole with a couple of friends to go skin diving. What all started out as fun and games, quickly turned into horror as they divers went down in attempts to explore the underwater, and never came back up.

After a search team ventured down in hopes of finding the pair, all they were able to find was a mask, a snorkel, and a flashlight tied to a rock. Since nobody accurately knows the depth of Devils Hole, it is thought that their bodies could have ended up further down than any explorer could reach.

As stated above, nobody can give you an accurate answer on the actual depth of Devils Hole. Despite the waters being researched and explored for decades, the entirety of the water system remains a complete mystery.

Another crazy fact about Devils Hole is that it is capable of underground tsunamis. In the researcher’s recordings from March 2012, results revealed water levels continuously rising and dropping. The scientists later learned that, more than 2,00 miles away, an earthquake in Mexico was the cause of Devils Hole’s tsunami, potentially meaning the body of water could extend thousands of miles across other parts of the world.

Below, you can find more mysteries and crazy facts surrounding the incredibly unique Devils Hole.

Some even claim that the curious place is home to “water babies” an underwater monster that would swallow swimmers who unknowingly spend too long in their waters.

Another legend surrounding Devils Hole claims that something evil lived in the mountains and caves in the area and would sometimes come down to eat unsuspecting victims who rested on the shore.

To get a little more information about the mysteries Devils Hole holds, check out this video shared by Abandoned Explained on YouTube down below!

Are you fascinated by this wonderfully creepy place named Devils Hole? Let us know in the comments.