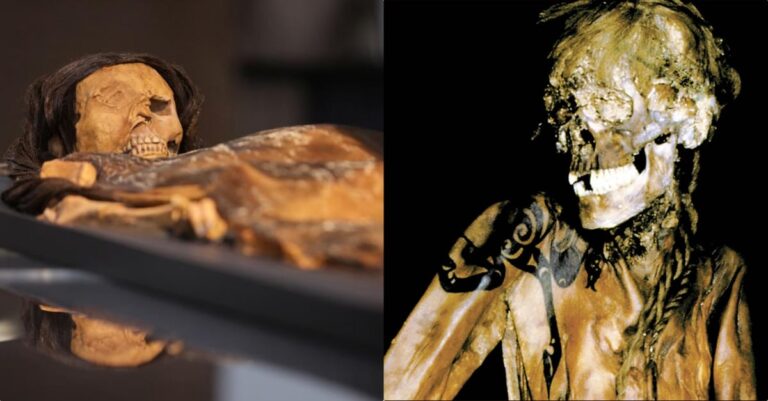 Historians and archaeologists may see so much in mummies, but to the average person they are straight up creepy. The preserved remains reveal a great deal about lifestyle, diet, cultural, history and cultural practices. However, alongside all the educational perks, the tales of mummies are downright eerie. From all the mummies around the world, these 9 have a history that is too chilling to believe.

The “Ukok Princess” mummy died almost 2,500 years but its remains have well preserved tattoos on them. The tattoos display a deer with a griffin’s beak and Capricorn antlers. The people of her land believe that tattoos aided in identifying people in the afterlife and hence were increasingly elaborate. Her cause of death remains a mystery but the degree of preservation in the body is chilling.

In China, in 1980 Loulan was discovered. She passed away 3,800 years ago The salty and dry soil worked as the perfect preservative for her body. Quite eerily enough, even her beauty has been preserved and although the mummy is about 4,000 years old it is still quite striking.

Ramses III’s remains found in his tomb lead historians upon an ancient murder mystery. Upon opening up his tomb, a CT scan of the mummy revealed a deep cut in his throat (7 cm or 2.7 in in length) that almost went to his spine. This slice almost decapitated him and certainly led to his death. It is a mystery as to whom did it but legend has it that it was his sons.

About 1,500 years ago in Northern Peru, the Lady of Cao, a member of the Moche people, passed away in her mid-twenties. It is believed that she died during childbirth. Her preserved body shows multiple tattoos all indicative of black magic.

This child mummy’s story is sad and haunting. From what researchers believe he was buried alive with his mother years and years ago. It is believed that he had Down’s syndrome and was most likely left to die because of that.

King Tut’s tomb has an unexplained curse upon it. When opened in 1923, it caused the mysterious deaths of 6 people out of the 26 present. Researchers blame the deaths on the bacteria found on the walls of the tomb. Although it is not confirmed, the fact that some tombs held traps to poison or kill whomever entered is true.

A 2-year old girl died of pneumonia in 1920 in Sicily and her remains were mummified. The body is so well preserved that it appears as if the little girl is asleep. In fact, at times it appears as if she opens and shuts her eyes. Researchers say this effect is created via an optical illusion by the light as it shines in the catacombs at different times of the day.

In 1991, Ötzi the Iceman was discovered in the Alps. From the remains it can be deduced that he passed away from a blow to the head in 3,300 BC. Making Europe’s oldest natural mummy, the body is so well preserved that when found scientists were able to determine his last meal – herb bread and red deer.

Two mummies purchased in Alexandria in 1699 were being transported via ship. The ship experienced severe tossing about and rough seas up until the point that the passengers on board tossed the mummies into sea.

These mummy stories all have mysteries behind them that defy explanation. From murders to curses that lead to mysterious deaths, we are no closer to understanding the world of the dead even with the help of perfectly preserved mummies.