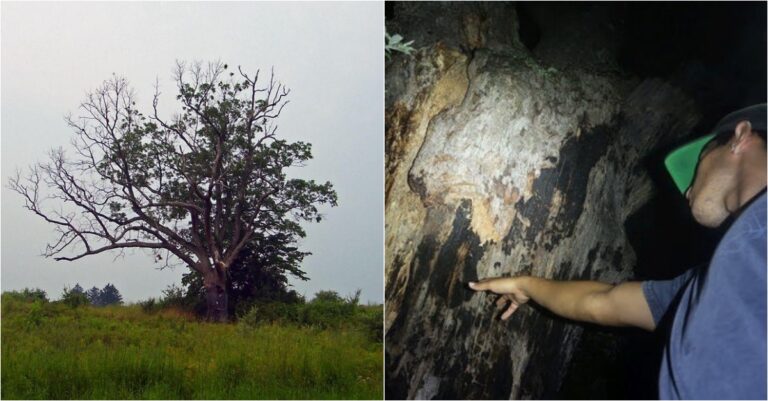 A park in New Jersey in Somerset County is known to be one of the most haunted places in the state. In the park, a tree which is referred to as the Devil’s Tree is fabled to have come straight from hell. The tree is cursed, and it is believed that the Ku Klux Klan had nearby headquarters to it. Being in a remote part of the county, the tree was used by the Klan as the ideal spot to lynch black people. The tree stands cursed, and many people have reported creepy occurrences taking place around it.

Rob S. who visited the tree shares the evil energy surrounding it: “The evil energy around the tree comes from the souls of dead men and women who were killed by this vile organization. If you look at the tree, you can see the left most branch extends almost parallel to the ground. This was the hanging branch.”

The Tree Hates Being Climbed

The tree dislikes people climbing it. Steve K. who happened to climb it once reportedly says: “As we sat on the branch, we began to hear noises coming from inside the tree.  When these noises grew even louder, a big bang sounded, and a burst of energy came from the tree sending myself and my friend flying into the air. When I crashed to the ground, I landed on my ankle, breaking it in 2 places.”

Do Not Use The Devil’s Tree As A Bathroom

A brave teen visitor of the tree, who doubted any tales of hauntings, once took the time to urinate on the tree while driving past. He parked his car and left to relieve himself on the tree and then continued on his way. Apparently, the tree was quick to take revenge. His car accelerated on its own and became uncontrollable eventually hitting another tree down the road.

Some People Claim Hearing Voices From The Tree

While the average tree is inhabited by birds and squirrels, far more sinister creatures live within the Devil’s Tree. According to a visitor, there were haunting voices screaming from within the bark.

After numerous failed efforts of removing the tree, authorities and officials have settled to protect the tree. It stands wrapped in chain links to keep people away.

Some people enjoy taking souvenirs from the Devil’s Tree. On one interesting occasion, a visitor took some bark from the tree. Soon, he started seeing a specter in the form of an old man who appeared near the bed at night.

The Tree Haunts Those Who Handle It

Those who touch or climb the tree are fabled to undergo strange hauntings. Apparently, the tree does not like being handled, and its victims have claimed to see “shadowy figures out of the corner of their eyes.”

Kirk S. visited the Devil’s Tree one winter, and this is what he had to say: “We went up to the tree and noticed that all the snow around it was melted. After we’d touched the tree and gotten back on the road, a black truck with some very bright lights started tailgating me like crazy, doing 85 mph down the windy road. I was scared. All of a sudden, the truck’s lights and the truck disappeared, my fan belt snapped. Then just last week we went up to the tree with a bunch of friends. We took a Polaroid picture of it, and to our astonishment, when the picture developed, on the right side of the tree there was a lady with a red dress hanging from what looked like a noose.”

One of the many theories of the tree’s curses is that of a depressed farmer who took his family out for a picnic under the tree around 1900. What started off as a nice family lunch ended in the murder of all his family and his eventual suicide. The demonic nature of the tree makes it consistently warm, even melting the snow that falls around it.