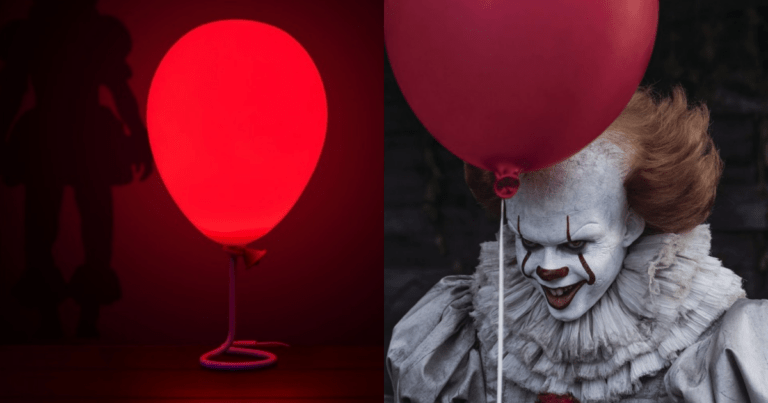 After the 1990s original which was sure to have freaked out most of you 80’s and 90’s kids, ‘It’ became a massive hit with horror fans and has withheld its legacy until this day.

Pennywise returned 27 years later to haunt another generation of children and adults, but this time one movie wasn’t enough for the crazed murderer.

You can click on the lamp image below to go directly to Entertainment Earth site.

It Chapter Two was released just two later in 2019, this time instead of targetting his usual audience of individual children, he opts to take out his newly found grown-up enemies.

One thing that remained the same throughout the entirety of the movie world for It was the creepy red balloon his victims would see before he began reigning terror on them.

Well, now, that very balloon has been created and is available for $39.99 and you can get your hands on the incredibly iconic lamp HERE. If you do require 2 lamps you get 40% off the second one too!

The description explains how this is a near-identical match to eerie balloon from the movies, and when switched on, the lamp lets off a mood and light like no other felt before.

Aside from the fact, Pennywise could be watching you at any point while you own one of these balloons, the lamp is a great, relaxing addition to any household who have strong feelings about the horror genre.

Although it does portray it in the picture, the lamp, unfortunately, doesn’t display a Pennywise-shaped shadow, meaning if you do see one while the balloon is in use, run for the hills.

The lamp is the officially licensed IT balloon, stands at a solid 34cm tall, replaces its balloon string as the stand, and is powered by a USB cable which is included with your purchase.

If you are a fan of the IT franchise (you most likely are if you’re reading this), then why not go and check out the Pennywise POP! where a combination of cute and creepy is awaiting your arrival.