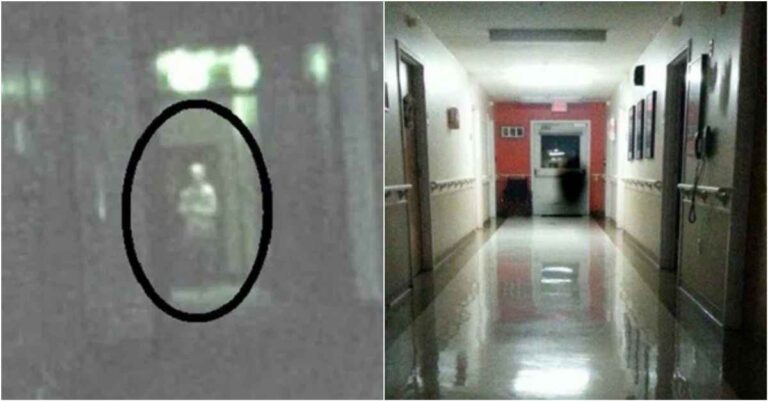 While horror movies focus majorly on haunted asylums and hospitals, the true horror lies in the gory history of these buildings. In the 19th century, the mentally ill and sick were taken care of in inhumane manners as most people believed that they were possessed by demonic entities. From being treated like animals to being tortured, there is far more to insane asylums and hospitals of the past than what we know.

While Waverly Hills Sanatorium in Louisville, Kentucky is regarded as the ‘Most Haunted Hospital’ in America, more significance is paid to Room 502 where one of the former nurses hanged herself. A few years later, another nurse who fell from the same room’s window. Both spirits now haunt the room. The shadowy figure in the photograph is presumed to be the spirit from Room 502.

This eerie picture of a man in a straitjacket was taken in Old Fort Douglas Hospital in Salt Lake City, Utah. The photo was snapped on the third floor when no one was present other than those capturing the scene.

A lone visitor decided to investigate Waverly’s paranormal activity. While walking through the halls and rooms, he took this picture of a dark figure beside a gurney. He was alone in the whole asylum.

In 1998 at the Craig Dunain Mental Hospital in Inverness, Scotland, this photograph of what appears to be the apparition of a ghostly figure clad in white was taken. Locals who are familiar with the place state that the spirit is that of a former patient.

In 2006, professional photographer and Missouri Paranormal Research investigator, Tom Halstead, took this picture while investigating the haunted sanatorium. A lot of people believe that it is the spirit of a former patient, Mary Lee.

Adam Smith captured this photograph of Brecon and Radnor Lunatic Asylum in Brecon, Wales. While walking past, Smith spotted a shadow peering at him from the first-floor window of the psychiatric hospital – which had been shut for over 15 years.

In Tennessee, at the South Pittsburg Hospital, the Screaming Eagle Paranormal Society took this chilling photograph near the 2nd-floor nursing station. The two ghostly apparitions which appeared were both transparent but eerily enough, one of them was casting a shadow.

The photo was captured in a nursing home right after the residents heard odd sounds of doors shutting and saw lights flickering. Upon checking, the authorities found no one in the room. The picture was taken about 15 minutes after one of the patients in the facility passed away.

In 2014, during a group tour of the Waverly Hills Sanatorium, this photograph was captured. The photographer confirmed that no children were present at that time.

The Ghosts of Lima Tuberculosis Hospital

In 1972, The Lima Tuberculosis Hospital in Allen County, Ohio finally shut and has remained abandoned ever since. The hospital is famous for its paranormal sightings and attracts plenty of visitors. According to legend, descending into the basement at night leads to sightings of apparitions of the dead. One urban explorer took the trip to the hospital and then uploaded this photograph to a website for abandoned buildings.

Although all these buildings stand abandoned today, there is no denying that they are chockfull of paranormal sightings and activity. If only one were brave enough to venture there more often, the world would get to see far more of these spirits than it already has.