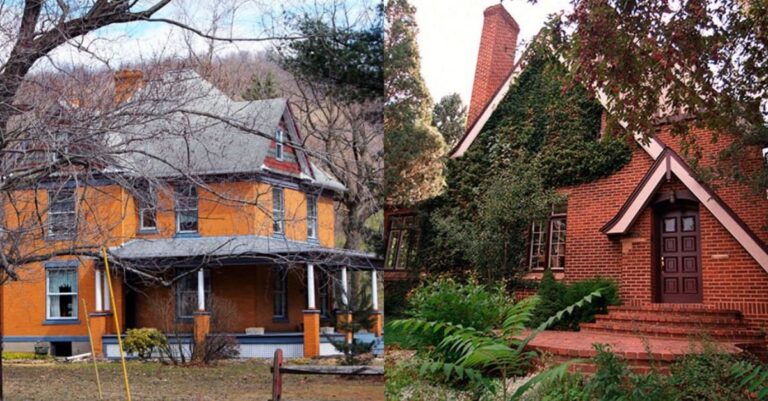 They say a house is not a home without inhabitants. We say a house is not a home if it does not have a gruesome and dark past. From houses used on the set of horror movies to sites that actually housed some of the grisliest crimes in history, this list of 9 houses with dark pasts will chill your very bones. At first sight they may appear ordinary, but in truth are far from that.

Cannibal, s** offender and notorious serial killer, Jeffrey Dahmer, grew up in this house tucked away into the woods outside of Akron, Ohio. His childhood home preserves many memories as well as horrors such as his first kill. In 1978, the house was where 18-year old Dahmer killed Steven Hicks. The murder was carried out with a barbell and the remains were buried in the backyard.

Located in the heart of LA, this posh condo was the final resting place of Ronald Goldman and Nicole Brown Simpson. The murder victims left behind a creepy vibe to the property and realtors struggled to sell it after. In fact, fans of horror will be disappointed to find that their search for 875 South Bundy Drive will lead them nowhere. The owners of the house changed the address in an attempt to have the property sold.

Anyone who watched Jonathan Demme’s Silence of the Lambs will instantly recognize this five-bedroomed house on 8 Circle Street. This is precisely where Buffalo Bill’s notorious moths were nurture and his female victims were lotioned and skinned. The house hosts the essentials of a dream American house, from a wraparound porch to a pool and a pool house. The gore and history of the lore of the house situated right outside of Pittsburgh makes it hard for it to sell. Rumor has it that the basement has a dungeon pit.

The famous house of the 1974 classic, The Texas Chain Saw Massacre, has been transformed into the Grand Central Café. Fans of the morbid and the grim rush to this roadside food house which was originally located outside of Round Rock, Texas. It was then moved to Kingsland, Texas, after dismantling in 1998.

At 2475 Glendower Place, the Spanish Colonial space has remained unoccupied since 1959 when a cardiologist attempted to murder several members of his family. Dr. Harold Perelson took a hammer to his sleeping wife and left her dead. He then proceeded to attack his teenage daughter. Although she survived the attack, her scream awoke the two younger daughters. Perelson told them it was all a nightmare and to go back to sleep. The cardiologist then committed suicide by overdosing on medication.

In 1996, JonBenet Ramsey, a beauty queen, was brutally murdered in the Ramsey house over Christmas. She was 6 years of age. The charming house had a brick façade, a gorgeous terrace, even a wet bar and a basketball court. Looks like even the best of places aren’t devoid of grisly pasts. The murder of the child remains a mystery. The following afternoon her body was found alongside a ransom note but no one was caught for it.

Tragedy was so deep rooted in the Lemp family that they simply could not evade it. First, William Lemp’s son died in 1901. Three years later, the patriarch shot himself in the bedroom. Not long after, the mansion’s walls saw the suicide of three more family members. Rumor has it that their souls never left those walls. Today, the place has been transformed into a restaurant and an inn. It is easily one of the biggest paranormal spots in St. Louis.

The Beachcomber Home of Tragedy

The house that stands on the corner of Sea Lark Road and Beachcomber Lane has a creepy and crazy history. A woman who was diagnosed with postpartum psychosis resided here with her five children.  One day she murdered them all. The youngest child was 6 months and the oldest was 7 years. She drowned them all in the bathtub, one after the other. Her name was Andrea Yates.

In 1974, Ronald “Butch” DeFeo Jr. attempted to kill his father with a shotgun held to his head. However, the weapon failed and his father lived. But, not for long. A few months later, he finished the job alongside killing his mother and all four of his siblings with a Marlin rifle. Although a new family moved in a year later, the house was forever tarnished with the blood of the innocent. The paranormal occurrings never ceased even to this very day.

Seeing how most of these properties regularly hop on and off the market and sell for exorbitant prices, would you ever consider buying one? Sometimes, horror seeks you out instead of you following it. From paranormal activity to imminent impending doom, what lies over these properties is nothing but grim.