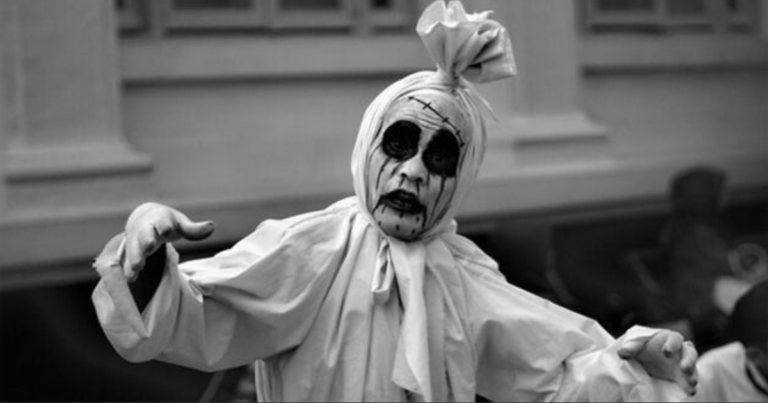 In the village of Kepuh, Indonesia, the local village youth group have come up with an inventive way of keeping people indoors and to encourage social distancing.

Located on Java Island, some of the citizens have taken to wearing somewhat terrifying ghost costumes to keep people off the streets at night. Anjar Pancaningtyas, the head of the village’s local youth group says that they “wanted to be different and create a deterrent effect”. Now working with local law enforcement, Pancaningtyas hopes to do his part in the epidemic effort and to stop it spreading to the townsfolk.

The ghostly images that the patrol portrays are known as ‘pocong’ otherwise referred to as a ‘shroud ghost’. The pocong is said to be the soul of the deceased which has become ensnared in its burial shroud known locally as the kain kafan.

According to the old beliefs, the soul of the deceased will stay on earth for 46.3 days after the moment of death, and if the ties of the burial shroud are not released after this time then the soul of the dead will roam away from its gravesite and alert the locals to let it go free.

At the start of the experiment, the ghostly sightings had a fairly opposite effect to the one that the group had hoped for.

The sightings of the ghosts actually drew crowds who were hoping to catch a glimpse at the folklore legends. This forced a change in plan to where the ghosts now launch surprise patrols and are getting a much more desired effect.

The president of Indonesia Joko Widodo has refused to implement a state of national lockdown in the country so the ghost effort is just one small part of the village’s plan to curb the spread of the virus. As well as this spooky service the village has also implemented its own state of lockdown as well as limiting movement of its inhabitants as well as visitors.

But for now, the plan seems to be working according to one resident who says “Since the pocong appeared, parents and children have not left their homes…people will not gather or stay on the streets after evening prayers”.

I'm quite surprised that some of my westerner friends doesn't find Pocong scary. pic.twitter.com/w0hOwRSqEA