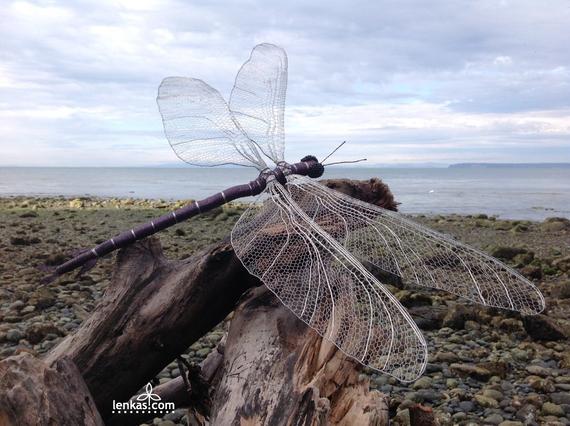 The Meganeura, which is currently believed to be one of the largest insects to have ever existed thrived at the end of the Carboniferous period, around 300 million years ago.

Traces of this carnivorous flying behemoth were first discovered by scientists in France in 1880 and even though it is commonly thought to be a distant relative of the dragonfly, the meganeura is generally referred to as a griffin fly.

The meganeura got its name due to its massive veiny wings when it was labelled by French palaeontologist Charles Brongniart in 1885, five years after its initial discovery.

Another fact about the wings of the meganeura is that its wings were incredibly durable due to their cross-bracing pattern.

It is theorised that the meganeura was able to grow to its gigantic size due to the oxygen rich atmosphere of the carboniferous period.

Compared to the 21% oxygen content of our modern day atmosphere, in the time of the meganeura it was as much as 35%, this meant that huge growth boosts were possible.

It is thought that the meganuera hunted just like the present day dragonfly with their menus including smaller insects, frogs, newts and various invertebrates.

Just like today’s dragonflies, the meganeura had extremely developed eyesight. To put it into perspective, if dragonflies are anything to go by they could see colour spectrums invisible to us, including ultraviolet light.

The extinction of the meganeura is a topic that is still debated to this day. Some sources argue that they died out due to the changing composition of the earth’s atmosphere whilst others think that they were simply out-evolved by prehistoric birds.

With mentions in the ‘Jurassic Park’ franchise, the meganeura was amongst good company when it came to giant creatures, as it joins gigantic 8-foot eurypterids and prehistoric millipedes which clocked in at around 6 foot long.