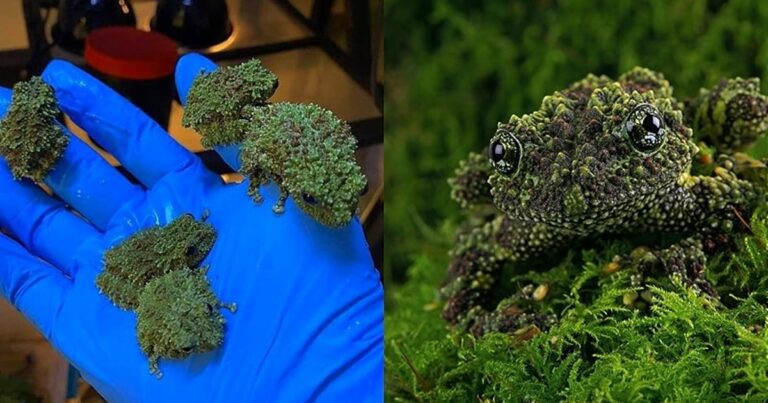 There are relatively few animals that can call themselves a master of disguise. While the chameleon is undoubtedly one, the Vietnamese Mossy Frog may take the crown. The majority of people would not have heard of the weird little creatures, nevermind seen them, and that’s exactly how it likes it.

However, the frog looks to be facing extinction, with deforestation around the country destroying much of its native habitat. Alongside this, the animal is desired for its natural abilities. For example, the frog has one of the more elaborate camouflages on the planet; after all, it didn’t get the moniker ‘mossy’ for nothing.

A large portion of this is its mottled green and brown skin, which highly resembles the moss that typically covers the rocks and trees the species calls home. Coupled with this is its bumpy appearance, which brings it closer to the appearance of a lump of moss. This helps to ensure that it blends in perfectly with the background almost constantly.

While this is quite an interesting camouflage, it isn’t the only way that the Vietnamese Mossy Frog is able to disguise itself. In contrast, it holds the ability to throw its voice several meters, something which is rarely seen in the animal kingdom. As a result, even if you’re in the vicinity of the frog, it can still be extremely difficult to actually find.

The amphibian’s defense mechanisms don’t stop there, however, Instead, it’s known to roll up into a ball and play dead whenever it feels threatened. This should mean that most predators will walk past without even knowing that the Vietnamese Mossy Frog is close by.

Typically, the frogs grow to between 2.5 and 3.5 inches, with the females being slightly larger than the males. Alongside this, the species has sticky disks on their feet, which makes them quite adept at climbing trees.