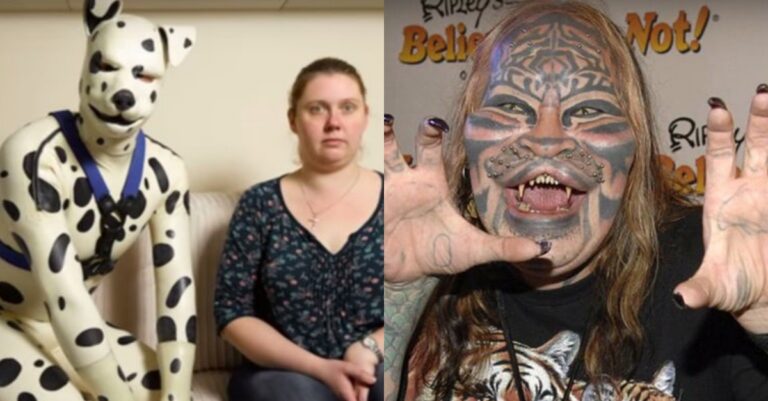 Has it ever crossed your mind that if you were a dog or a cat you would be happier? Or maybe a crocodile or a fierce tiger? If yes, then do not feel troubled, you are not the only one who has ever wished for that. There are many people who turned themselves into an animal of their choice and felt free and happy to be in that form. The idea of finding peace in acting like an animal is not a new phenomenon. The ancient times witnessed accounts of humans becoming werewolves and the idea of the centaur is another version of pony play.

Marek H Became A Siberian Tiger to Treat His Depression

In the chilling winter of December 2016, research cameras in the forest of Polish forests caught the images of a naked man called Marek H. He was from the Czech Republic. He chose to treat his depression with LSD.  Through his psychedelic haze, he found out his “true self” – a Siberian tiger. He tore his clothes and walked 15.5 miles along the Czech-Polish border for 8 hours. But when police caught him, he said he was following on a scent he had caught.

Thomas Thwaites Spent The Holidays As A Goat

This is the weirdest holiday break you will ever hear about. UK-based designer Thomas Thwaites got the unique idea of spending the holidays like a goat. He collected all the scientific information he needed to mimic a goat and even learned to digest grass. He had a clear picture of what and why he was doing what he did. He said, “My goal was to take a holiday from the pain and worry of being a self-conscious being, able to regret the past and worry about the future,”

The interesting thing about Thomas Thwaites is that he did not suffice with his changed appearance and eating habits but he also consulted experts to know to think like a goat. In September 2014 he joined a herd of goats and the farmer gladly reported that the goats seemingly accepted his presence among them. Maybe the goats didn’t really care!

56-year-old Ted Richard took a very bold step in 2015 and cut off his ears. He was determined to turn his nose into a beak should a clever surgeon help him. He wanted to turn into his favorite parrot. But what about 110 tattoos on his body and even eyeballs? Also, the 50 piercing and a split tongue would be an obstacle to becoming a parrot.

He really underwent a 6-hour surgery to remove his ears but he had to wear glasses for which the surgeons fixed 2 metal pins at the side of his heads.

The Woman Who Became A Dragon

At the age of 55, the idea of turning into a dragon hit Eva Tiamat Baphomet Medusa – a transgender. She went for the idea and removed her ears, adjusted her nose, extracted some of her teeth, forked her tongue and dyed her eyeballs. To complete her dragon look, she implanted horns in her forehead and got a full-face tattoo of dragon scales. She is running her own website now and maintains that she is “becoming a reptoid” and “leaving [her] humanness behind.”

Not One But Multiple Animals For Charles Foster

He was fascinated by animals since his early childhood. He tried to figure out how animals lived and thought. He tried to live like a swift, a deer, a fox, a badger, and an otter.  Mr. Foster learned to live outdoors like an otter and a badger along with his children. They learned to recognize each other by the smell of their droppings. He also tried to live as a deer and asked his friend to let his bloodhound chase him so that he can experience how being hunted felt like. But he admits that he failed because he couldn’t “come down the pyramid and become a victim.” When he lived like a swift, he ate worms but his most successful guise was as an urban fox that ate from the London trash cans.

Tom from Hertfordshire visited ITV’s in 2016 in the guise of a Dalmatian called Spot. Tom got a Dalmatian costume for $5000. He plays dog mode quite expertly. He “fetches” and sleeps in a kennel. He finds eating real dog food amazing. You might be thinking that possibly a sexual fetish has convinced Tom to act as Spot but for Tom, it is the free life of a dog that has inspired him. No bills and no worries of deadlines. He finds it to be a chance to unwind and refresh the mind.

Trigger acted as a horse. He wore a saddle, a harness, a fake tail and a bit. But there is a full community of males who carry females on their shoulders and act as horses. Trigger died in 2014. Shoulder-riding enthusiast checkmateguy says, “Old ponies never die; they just gallop off to pastures new.”

Wolfie Blackheart formed a pack of “wolves” from among his friends at school and they would howl at the moon in between preparing for tests. They enjoyed going out in the form of a pack wearing fake tails and canine-like contact eye lenses. The trend of forming a pack of 12-20 people is widely spread in the high schools of Texas and San Antonio. They feel the warmth of kinship with their pack members. A werewolf says, “The pack, we’re family.”

The teens claim that they are harmless but Blackheart was recently found possessing the skull of a neighbor’s dog. She says that the dog was dead and how can she kill a canine since she herself is one.

The Man In Guise of a Cat Eats Raw Meat

Denis Avner is dead now but prior to his death in 2012, he spent a lot of money in parading around as a tiger. A Native American chief told him to do so. To make his figure most relevant to a tiger, he built silicone cheeks, pointy ears, divided his upper lip, implanted his forehead, got tattoos and piercings to attach whiskers. His last days were like a good cat that ate raw meat and climbed the trees.

A boy called Kaz enjoyed playing like a pup in his costumes. However, he acted as a pup even when he was not donning his costumes. He worked at a PC repair center and acted as a pup over there too. Kaz says, “Even when I [was at work] I would sometimes walk up to people and nip at their shirt. I got in trouble once; someone walked into the PC repair center and I had part of their dad’s computer in my mouth. But the other staff knew I was like that to everyone. They didn’t find it weird.”

Nano is a Norwegian woman who thinks she is a cat but was wrongly born as a human. She meows and hisses to dogs and walks on four. Of course, no bathing or washing!  For grooming herself, she uses two oversized cat paws. She claims to be able to see in the dark at night and hear more voices than humans. She uses her senses to hunt mice but still, no mouse ever fell to her prey.

Murad Ali dresses up like a mystical creature who is half woman and half fox. He spends 12 hours at Karachi Zoo giving entertaining education. Why a man plays the role of Mumtaz Begum – a woman? This is because “men are able to respond better to harassment and negative comments.” School kids visit the zoo to meet the mystery creature and ask her questions.

A 40-year-old Australian web designer called Leanne converts into a pony and pulls her friend Grace in a custom-made trap.  Wearing fake hooves, a skintight rubber jumpsuit, a bit, reins, and a tail she loves to be called “Shyanne.” She is building human-sized stables in the backyard of her house. She is an extremely shy person and says, “When I’m in pony gear I feel freer. It’s about who you are. I become me.”

48-year-old Boomer enjoys a life that is all about his freedom of sleeping, roaming around and eating dog food like an ordinary dog. He is amazing in his shaggy fur costume. He eats dog food and sleeps in his dog house. One of his favorite pastimes is walking around Pittsburgh, barking at cars. He even tried to legally change his name to “Boomer the Dog” but the judge did not allow him. His Mom has set up for him a trust because he is unemployed these days.

Do you watch My Strange Addiction on TLC television? If yes, then you must have watched Nicole in the form of a pony. According to the “hybrid”, this pony play is satisfying though quite extreme. She appears in reins, fake hooves and a bit. She interacts with her human “handler” who grooms her and cares for her. She even wears a  headpiece to tickle other ponies.

Can you believe this horse? Well, why shouldn’t you? This is a lovely horse person. This can enter in a horse jumping contest and be a lovely horse!

While reading the startling stories of those animen and aniwomen you will learn that not every one of them turned into his favorite animal for the same reason. Some chose to be there for their sexual fetishes while others wanted to escape from the modern life responsibilities. A few of them found more comfort in the form of an animal.