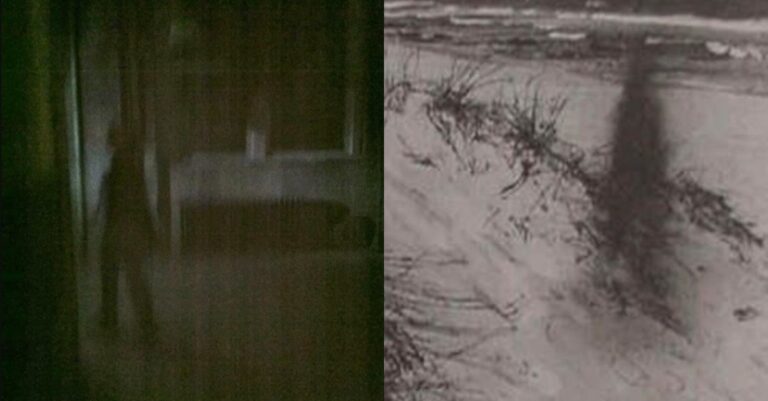 Shadow people have been reported very centuries as dark, black figures moving in a quick motion past someone or are standing in a corner of a room. No one knows what exactly shadow figures are, but they believe that they do not want to be seen by people- hence them hiding in the shadows and the darkness. Since no one can actually pinpoint what shadow figures actually are, many people believe that they don’t exist and that they are just a pigment of our imagination or that our eyes are “just playing tricks on us”.

These photos in this article will have you thinking differently because these are actual pictures of shadow figures that people have captured on camera. It’s up to you to decide if they’re real or fake, but seeing these images will send a single shiver down your spine because they’re so ominous and creepy.

1. The Figure in Black 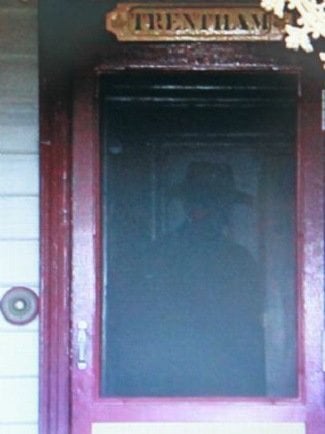 Port Arthur, located in Australia, was once a former convict settlement and later was transformed into an industrial prison. The history of this place is dark, eerie, and has lead to an exceptional amount of paranormal activity. A family in 2011 by the name of Poultney visited Trentham Cottage and caught an eerie photo of a shadow figure standing in a doorway. The father exclaims that they walked through the house moments before the photo was taken and the house was completely empty, making the family raise an eyebrow as to who- or what- is in the photo above.

After reviewing the photograph, Port Arthur’s Historic Site tour supervisor, Colin Knight, believes that the figure in the door way matches the other descriptions he has heard from people who have witnessed the shadowy figure before the Poultney family did. He believes that the shadowy figure is clergyman George Eastman who has reportedly haunted Port Arthur since he passed away in 1870. 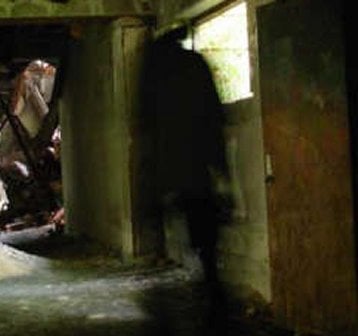 This creepy shadow figure is one of the figures people see at this location.

The Lima Tuberculosis Hospital in Allen County, Ohio, closed its doors in 1972 and has been decaying ever since the last person left the place. However, urban explorers and ghost hunters flock to this location because there has been a growing number of paranormal activity, making it one of the hot spots in Ohio people love to come to and investigate. Paranormal reports exclaim that if people were to go into the basement at night, they would see apparitions of patients on the floor and ghostly figures of people walking around in nightgowns aimlessly down the halls. Shadow figures are some of the most popular sightings at this hospital and they tend to dart in and out of rooms and sometimes follow people who are walking around the empty halls of the hospital.

Be careful if you go to this hospital, though, because it is heavily patrolled by police and security. They will arrest you or give you a ticket for trespassing on private property. An urban explorer took the risk of getting a ticket to adventure inside of the hospital, snap a photo, and upload it to the Internet to show everyone one of the shadow figures roaming around the hospital. The other photos this urban explorer uploaded show no other evidence of a black shadow figure in the location the photo was taken. 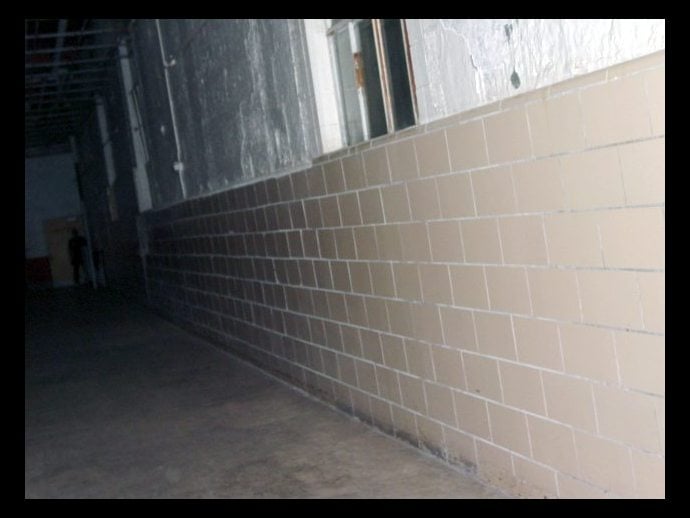 You can see the shadow figure standing against the door.

In West Virginia, Moundsville Prison first opened its doors in 1866 and became the home of many vicious and dangerous criminals of all time. The prison has a dark past that includes murders, suicides, riots, and executions, all leading to extreme paranormal activity behind the closed doors. The prison shut down in 1995 and has become opened to tourists and paranormal groups who are interested in investigating the prison. The above photo was taken by Polly Gear of the Mountaineer Paranormal Group when they were doing an investigation inside of the prison. Gear accounts that no one was around when this photo was taken and does not recall seeing anyone standing in the doorway as she snapped the photo. 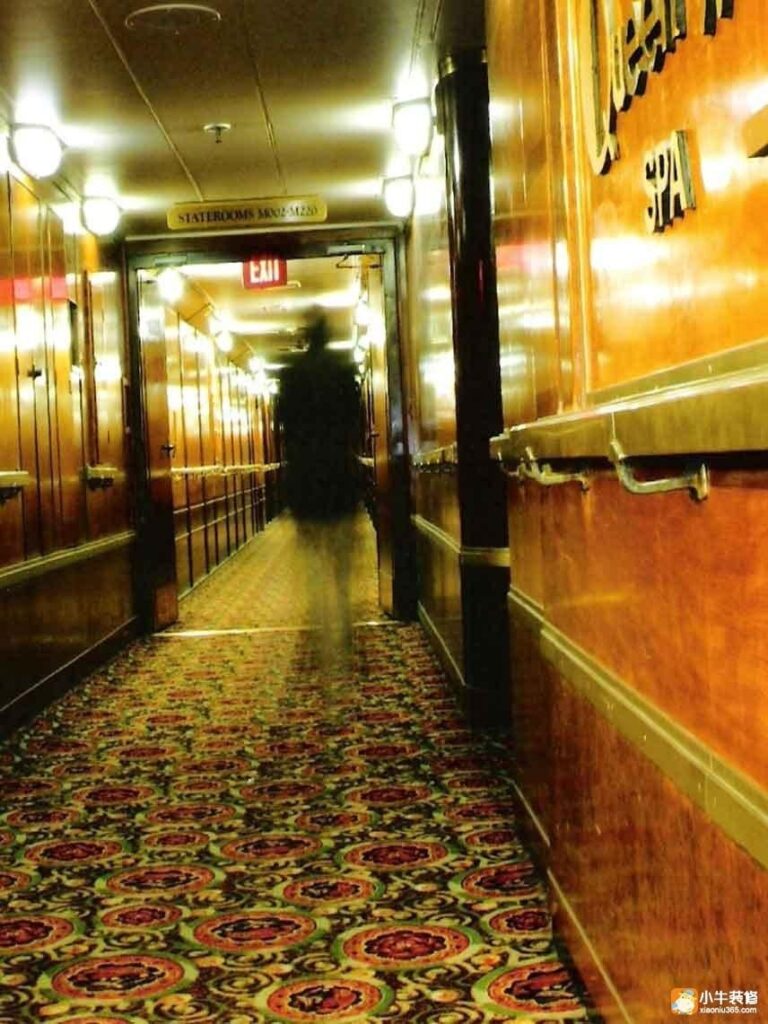 One of the best photos ever of a shadow person on the Queen Mary.

The Queen Mary is one of the most haunted locations in the world and has a long and dark past. Tourists and paranormal groups flock to this ocean liner every year to witness the paranormal activity that occurs on this ship frequently. People believe that this ship has over 130 spirits living on the ship, making the paranormal activity hot and consistent. This photo was submitted to Haunted American Tours in 2008 and is deemed as one of the best paranormal evidence ever captured aboard the Queen Mary.

5. Shadows On The Hill 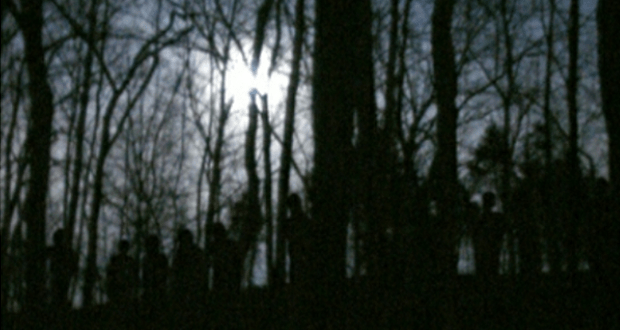 Lawler Ford road was built in the 1860’s and obtained the nickname Zombie road. It is located in Glencoe, Missouri and has been deemed as the most haunted road in America. Stretching for over 2 miles, the forest that runs along side this road is home to strange lights, eerie urban legends, and countless sightings of shadow people. Ever since the 1950’s, reports have been flying in that dark, humanoid figures appear on the tree line randomly on the forest road that sometimes follow travelers as they continue on down the road. The freakiest part is that the shadow figures disappear into thin air as soon as the travelers leave the area.

The reports of the strange sightings of shadow figures intrigued renowned paranormal group Paranormal Taskforce who set out to investigate Zombie road in 2005. Tom Halstead took the above photo showing shadow people lining the tree line on the haunted road. Halstead reports that no other people were around during this time and where the photo was taken was completely surrounded by water. 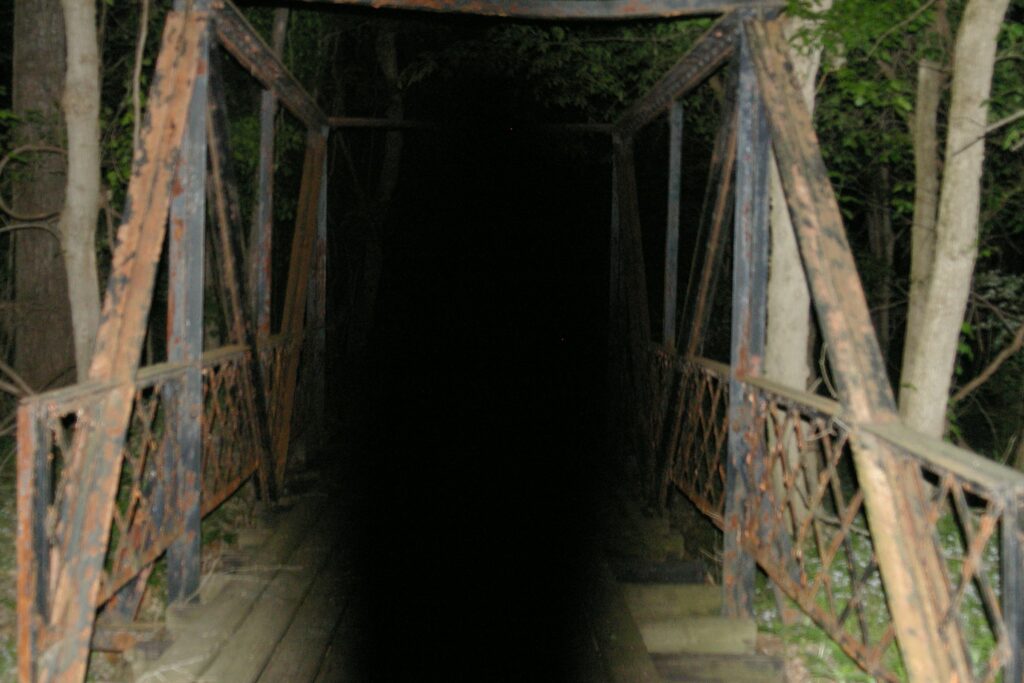 How creepy and eerie is this shadow figure?

Since Zombie road is well known for its shadow figures, it of course makes the list twice. Tom Halstead went to investigate the road again in 2006 and captured an even eerie photo of a shadow figure. The road, however, has now been turned into Rocky Hollow Trail that is only open to cyclists and dog walkers during the day. If anyone goes on the road at night, they can expect a hefty $1,000 fine. 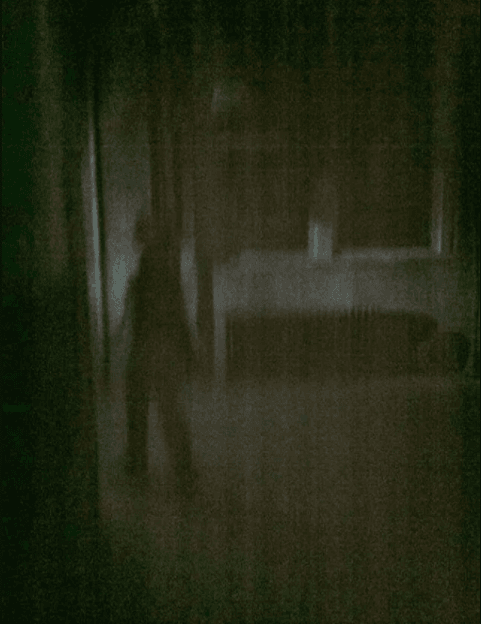 The eerie photo of the shadow figure that looks like a child.

Image via: The Ghost Diaries

Waverly Hills Sanatorium is now known as the most haunted hospital in America because of its increasing amount of paranormal activity. Hauntings include: apparitions of a young boy named Timmy who loves to play with rubber balls, a nurse that hung herself still haunts room 502, another nurse fell from the same room’s window and haunts the hospital, scattered screams can be heard throughout the halls, and footsteps can be heard walking down the empty halls.

8. Legend of The Gray Man 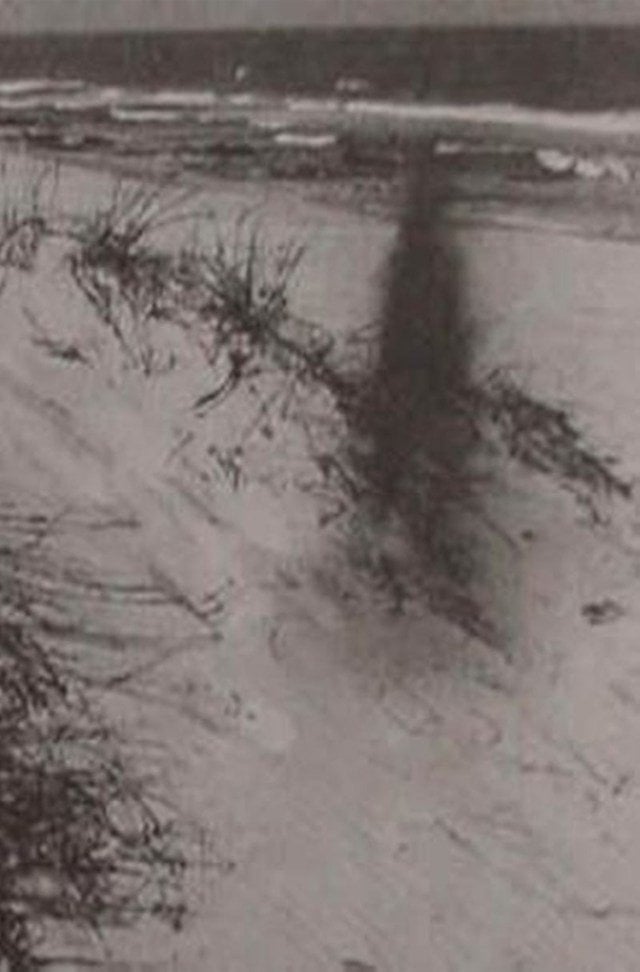 One of the best images of the Gray Man.

If you have ever visited South Carolina or if you live there, then you most likely have heard of the story of The Gray Man. This mysterious figure that people keep seeing is supposedly the ghost of a young man who died during the early 1800’s after he was caught in quicksand in the marshes located near Pawley’s Island. Ever since his tragic death, his spirit is known to haunt the shoreline and if you see the Gray Man, then that means it is a warning of a severe storm or a hurricane. 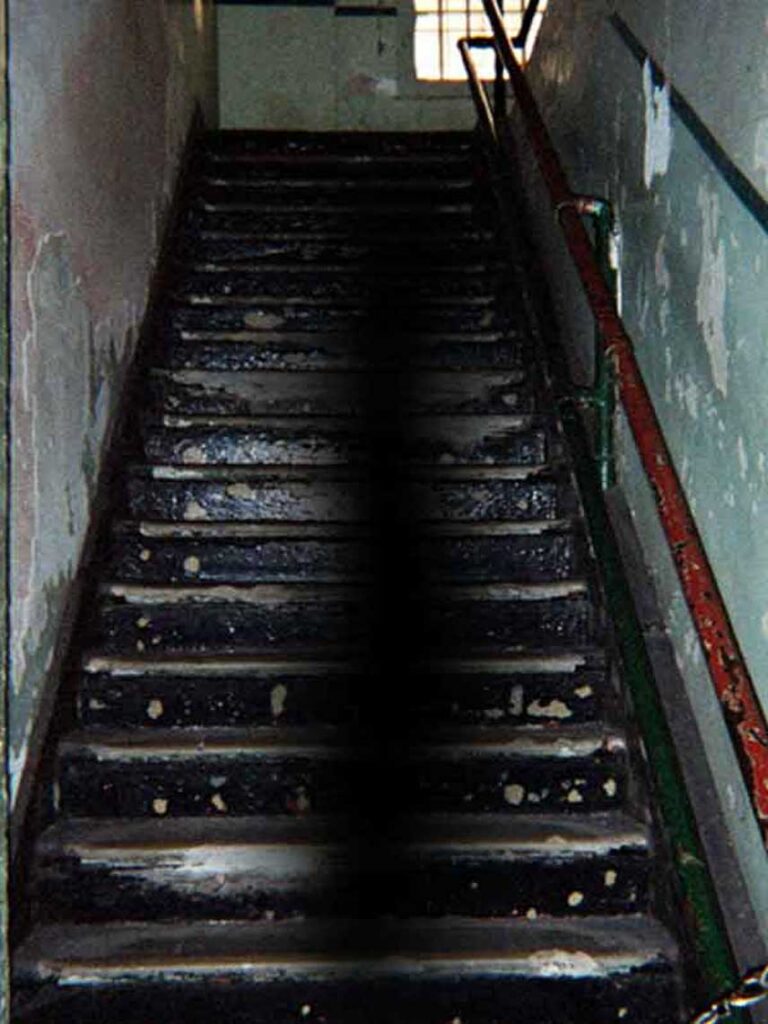 One of the creepiest black shadow figures captured at Alcatraz.

Alcatraz Federal Penitentiary is located in San Fransisco Bay and is often noted as one of the most haunted places in America. Prisoners, rangers, and visitors have all reported paranormal activity occurring at Alcatraz that ranges from whispering to doors opening and slamming on their own to phantom figures walking around the prison. Glenn Shelton took the above photo who claims that this photo helps prove that Alcatraz is the most haunted prison in the world. 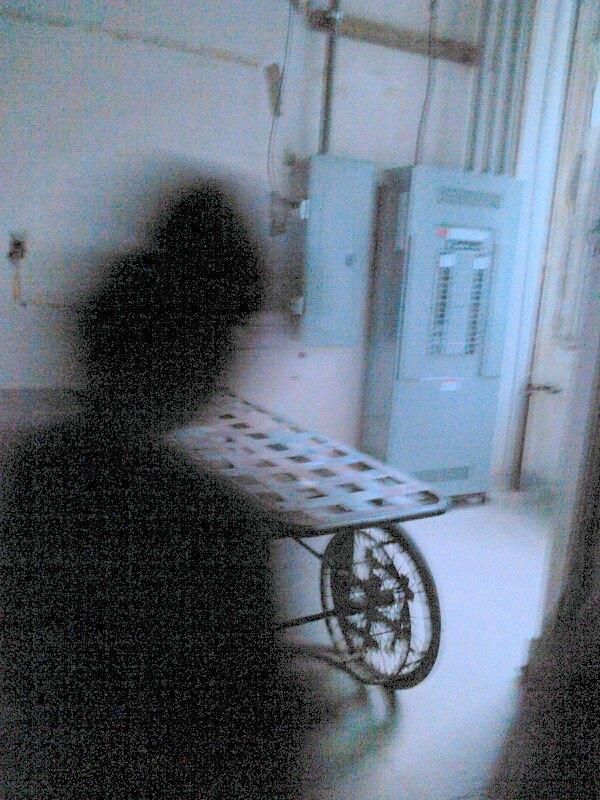 Do you think this is the nurse that haunts one of the rooms?

Located in Louisville, Kentucky, Waverly Hills Sanatorium quickly gained a reputation of patient mistreatment and human experimentation after opening in 1910. Reportedly, 64,000 people met their untimely death while being hospitalized there and before the sanatorium closed in 1961. The sanatorium has obtained new ownership and has reopened its doors as a tourist attraction and a hotspot for paranormal investigators to flock to after the sanatorium was investigated by Syfy’s hit television show Ghost Hunters.

After hearing about the reputation of Waverly Hills, a lone traveler decided to go investigate the sanatorium by himself to find some paranormal activity. He snapped the above photo while investigating one of the rooms and swears he was by himself the entire time and was amazed he even captured this figure.

What do you think of shadow figures? Do you believe in them or are you a skeptic? They have been around for centuries and sightings of them keep continuing throughout the centuries. Whether you believe them or not, people have captured evidence of them that is not only shocking and fascinating, but down right creepy and eerie.