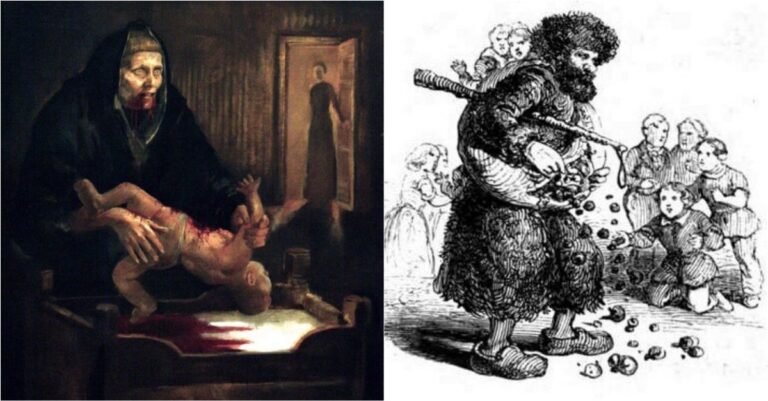 While Christmas is largely known to be a great time for love, joy, and family, that does not entirely entail that it is devoid of horror. Most families may be planning on the much-awaited visit from St. Nicholas on Christmas Eve, but there are other families preparing for more sinister creatures’ visits. The following are five Christmas legends telling tales of wicked creatures that bring horror to the holiday season.

Gryla is a tale that originated in Iceland (also infamously known as the Yule Lads’ mother). She is a giant who retains the ability to sense if children are misbehaving at any time during the year. Interestingly enough, she keeps a record of all those kids and during Christmas time, she snacks on them. Sometimes she would even boil them alive and make a stew out of them.

The word Krampus comes from the German word for “claw”. He is a half-demon half-coat creature with a long tongue, cloven hooves, and claws for hands. He is known to whip naughty children with birch branches and then steal them into his lair. They never emerged after.

A companion of Saint Nicholas, Knecht Ruprecht has a wildly odd story. It is believed that he traveled from one house to the next asking the children to pray. The good ones who complied were rewarded with treats such as nuts and apples. The naughty kids who refused to pray were rewarded with useless trinkets. However, the bad kids who blatantly rejected even attempting a prayer were beaten up. Knecht even left back a switch for their parents to use on them throughout the year.

Because of “The Office” a lot of people are aware of Belsnickel. However, the origins of his legend date farther back to the 1800s. A bad-tempered wizened old man, he would ensure the good kids received nuts, cakes, and candies while the bad kids were whipped on Christmas Eve using a switch.

The legend of Perchta is far more interesting than the rest. Perchta is a spirit who enjoys dual aspects – sometimes appearing as a haggard gorgon and other times as a gorgeous damsel. During the 12 days of Christma,  she would hunt down kids who misbehaved during the year. The kids who behaved well were rewarded with a silver coin. On the other hand, the kids who were naughty would suffer her wrath – she would split open their bellies, gut them and stuff them with pebbles and straws.

Out of all these legends, Krampus is the one that has stood the test of time and grown in popularity. The rest of the legends appear to have died down with modernity. Which of these do you believe in? How many did you think were absolutely terrifying?