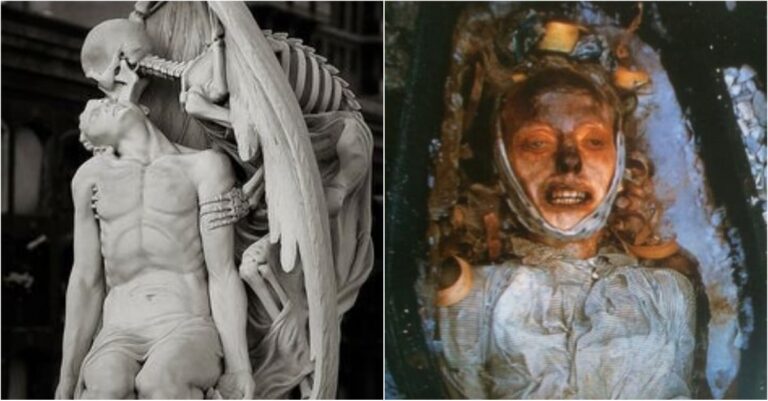 The internet is full of pictures that leave us a little disconcerted. Although we surf the web on a daily basis, sometimes the images we see are not ones that we are ready for at all. In the following collection of terrifying pictures, all of them are creepily eerie. See for yourself and be the judge.

This beautiful work of art titled, “Kiss of Death”, at Barcelona’s Poblenou Ceremony.

This photo of a facial composite of Mozart, 1777.

This image within a hospital caught by CCTV. The figure on the patient appeared briefly prior to the patient’s death only a few hours later.

Scariest Woman In The UK

This photo of Madam Violet, Queen of the Edinburgh Vampire Hive. In 1882 and 1884, she was voted as the scariest woman alive in the UK.

This photo of a mysterious sinkhole discovered in a Russian forest. There were no signs of interference, or construction equipment. To date its existence among the many others remains a mystery.

This photo of a husband who captured a picture with his wife, two days after her death. He pretended she was still alive.

This photo of St. Valentine’s skeletal hand, bejeweled in gold worth enough to feed a small country.

This photo of Klara Hitler who was Adolf’s mother.

This photo of a Chinese woman’s bound feet in comparison to a teacup and a normal woman’s shoe.

This paranormal photo taken in Pennsylvania’s Gettysberg. The man in the picture only appeared once the photo was developed.

This photo of John Torrington from the Franklin Expedition of 1840. The ship sunk and those who survived were maimed by lead poisoning from tainted cans. One of the men, Torrington, was buried in permafrost in 1846, while attempting to carry the furniture to Canada on foot. He was preserved perfectly.

This photo taken from a Victorian photo album, the date of which is unknown.

Creature Of The Sea

This photo of a strange sea creature caught on camera.

This photo of a mysterious sea-creature that was washed ashore at Folly Beach. It sported bony spokes along its torso and was over 10 feet long.

The scariest part about these pictures is the fact that most of them are ancient historical images. If you think that the world has gone to dogs nowadays, remember that the olden days were no better (if not worse).