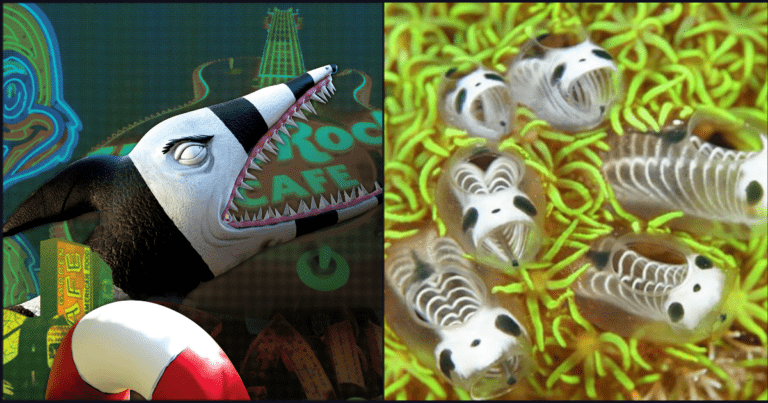 Tim Burton is most known for his quirky creations which are often influenced by elements of the fantastic and the unusual macabre.

His unconventional filmmaking is up there with the best of them, and his Beetlejuice character remains one of the most iconic dark comedy characters in existence.

Tim Burton’s unique style is like no other, but it seems these Skeleton Panda Sea Squirts have taken some inspiration from the director’s work.

According to a Twitter user, these little creatures are marine invertebrate filter feeders that look so similar to Tim Burton’s work, they could potentially end up in one of his upcoming projects.

Since the original post was tweeted in October last year, it has managed to gather over 37,000 likes and almost 12,000 retweets.

The picture has managed to gain countless replies, and while some were simply fascinated with the existence of this underwater creature, others complimented the sea squirts terrifying but adorable nature.

According to reports, the little animals, also known as Ascidians, can be found in the remote islands of Okinawa, Japan, and are most commonly seen when scuba-diving.

To feed, sea squirts take water through a tube (the oral siphon) and as the water enters the mouth, it flows through mucus-covered gill slits into a water chamber, later exiting through the atrial siphon.

The resemblance to some of Tim Burton’s works is uncanny, and if you’re not too familiar with the Oscar nominees work, you can go over and take the FREE Neon Museum virtual Tim Burton tour HERE!

Alongside Beetlejuice, Tim Burton is most known for his work producing Edward Scissorhands, Corpse Bride, and Frankenweenie, as well as his work directing Sweeney Todd: The Demon Barber of Fleet Street.

Are you as obsessed with these little underwater creatures as we are? Make sure to let us know in the comments.