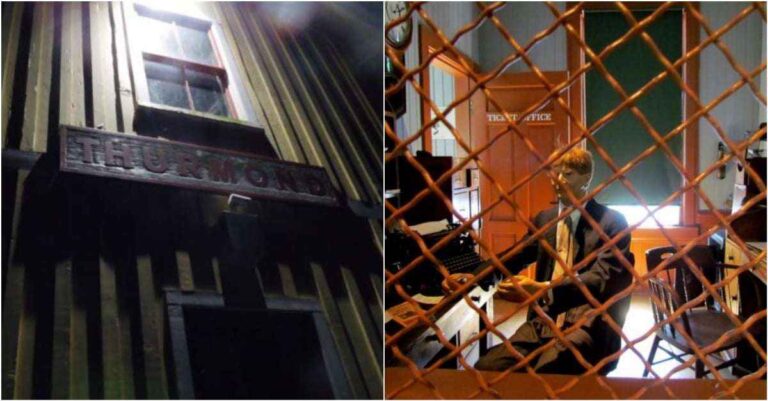 There is something so strange about Ghost Towns that you wouldn’t like to be there alone for a long time whatsoever. Be it the uncomfortable silence or the continuous nerve racking thoughts, you remain frightened and keep praying to not get caught by any weird creature who you presume might be behind you. Although these thoughts originate in us from watching thrillers or the dis trustfulness that we absorb from the stories in our society, we still wouldn’t like to witness anything as such in real with our own selves. Reality is always worst and who would listen to our cries then?

The residential area of Thurmond was initially joined in 1900. Its population rose up to 462 in 1930 which is the highest, but later it gradually dwindled down to 5 occupants. A stroll through the quiet town will lead you to the old railroad stop, now known as visitor’s favorite spot.

The visitors hub is located around the silent railroad tracks, which was once very occupied and vibrant.

If you go inside the center you will see an exhibition of the station which shows the scenes back from those days when this place was alive. You will also see a dummy standing in front of a station employee. It is frozen with a sinister pose which gives us a vibe that may be something was wrong at that time, may be the weather.

strong>When you look at the town, you see dead weeds and brushes all around. This even makes us difficult to believe on the fact that anyone has ever lived there or still does. The buildings inside are even so empty with darkness.

Indeed, even Thurmond’s small business focus lies devastate, as though the world has exhausted. While strolling along the little territory, peering into obscured windows, you get an odd feeling of being viewed. Maybe you are separated from everyone else, maybe not. Your brain can fill in the spaces.

There are a lot of ghost towns across West Virginia like Thurmond which is waiting for the silence to be broken.

Have you ever been to any? Share in the comments box.