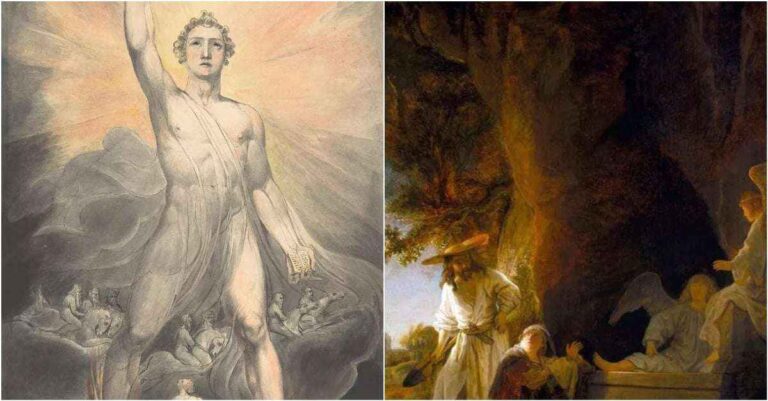 John – an apostle of Jesus Christ, whose writing in Revelation show that the angel of death is indeed Abaddon, the leader of fallen angels sent to punish humans for their sins. His mention in the Old and New Testaments give a horrifying insight into the role of archangels in the hereafter. But what’s more disturbing is Abaddon’s role in the creation of humankind. Fittingly so, he may be the one to also collect the souls and carry them to God on judgment day.

God Unleashes Abaddon unto Earth to Punish them For Their Sins

John is said to have written the Book of Revelation during his exile in the isle of Patmos. It was there that he reportedly received a glimpse of The Day Of Judgement. It was in this Revelation that Abaddon is introduced as the leader of fallen angels. He shall lead his fallen angels and wreak havoc to punish the sinners.

Abaddon is Only Permitted To Torture, Not Kill

Although biblical translation proves difficult, most scholars agree on a specific area that goes to say that his powers are limited. Revelation 9:4 says, “and it was commanded of them that they should not hurt the grass of the earth, neither any green thing, neither any tree, but only those men who have not the seal of God in their foreheads.”

Moreover, 9:5 states that Abaddon and his team “were not given the power to kill them, but only to torture them for five months.” But still, Abaddon’s authority to constantly torment mankind is unnerving. Revelation 9:6 shows how bad the torture would get: “in those days men will seek death, but will not find it; they shall long to die, but death will flee from them.”

Vaguely, His Name is Defined As “The Angel Of Death”

While Rabbinic teaching considers Abaddon a place, they also identify Abaddon as one of the angels of death. In Job 28:22, Abaddon is mentioned together with death when Abaddon is first given personification as a being, and thus not a place.

Although there isn’t much about Satan in the Torah, his existence is present in the text. Human beings who do not have the seal of God on their foreheads will suffer at the hands Satan and his demons on judgment day. While Satan is the primary antagonist of God, Abaddon is the leader of the demons sent to torture humankind.

For Some, it’s Evident That Abaddon Isn’t Lucifer, But Have A Lot In Common

Some biblical interpretations even treat Satan and Abaddon synonymously, but there are many other points that contradict this. One verse states, “they have over them as king the angel of the abyss.” This verse arrives after God unleashed the locusts to torture Earth during the end of days.

Some interpret this as the locusts that have no king. So, while Lucifer is the king of Hell, Abaddon leads the locusts unleashed to torture those who do not bear the seal of God.

Abaddon Is The Leader Of An Abyss By The Same Name

In Jewish and Christian traditions, Abaddon is not only the personification of a fallen angel but an actual place. Abaddon is said to mean “place of destruction.” In Job 31:12, it is said, “for it would be a fire that consumes to Abaddon.” John writes in Revelation, “after the fifth angel sounds his trumpet, a star falls from heaven and opens the bottomless pit. A storm of smoke arises, and from the smoke, a plague of locusts emerge to torment, but not kill, men who lack the seal of God on their foreheads.”

In Some Texts, Abaddon Is A Place Of Lost Souls/Hell

Some believers insist that it’s possible Abaddon is merely another word for hell. This leads to the conclusion that Abaddon just describes a place of destruction and chaos, where Satan is the leader, and Abaddon is his kingdom. This is because of this passage from Job 31:12, where Abaddon is described as a place of fire. But in Psalm 88:11, it states, “will Your loving kindness be declared in the grave, your faithfulness in Abaddon?” But it’s also in Job where Abaddon first gets considered as a conscious being. In Job 28:22, Abaddon can speak and hear, and states of Abaddon and Death “Only a rumor of it has reached our ears.”

In The Gnostic Text, Abaddon Is Said To Be Present In Jesus Christ’s Resurrection

Since Abaddon and Job are both personified with death in multiple texts, the Gnostic documents assert that Abaddon was present at the time of Jesus Christ’s resurrection at the tomb. These documents confuse his role as the underling of Satan of an angel in God’s army.  Following Jesus’ death, in the Gospel of Bartholomew, Abaddon approached him in the underworld. In Bartholomew, Abaddon suffered Jesus’ laughter in his face, which terrified him and his sons. Abaddon and Pestilence, his son, then strived to protect the underworld when Jesus rose from the dead. However, according to Bartholomew, Jesus had already left Hell leaving behind three souls: Cain, Judas, and Herod.

The Gnostic Text Also Says Abaddon Is The Angel Who Gathered The Earth To Create Adam, And Will Carry Souls To The Valley of Josaphat

In Acts of Thomas, another Gnostic text, Abaddon plays an important role in humankind’s creation. He was granted the task of gathering the Earth which God used to create Adam. Following that, he was identified as a guardian, and all the corporeal entities feared him. It is also mentioned that Abaddon will be the one who carries souls to the Valley of Josaphat – the place where God will deliver all souls for final judgment.

Although Abaddon is highly controversial in Judaism and Christianity, he retains his terror. The role he plays as the torturer of those who stray from the path of the righteous contrasts with the Christian view of a merciful and all-loving God. For a God to create humanity and bestow them with his endless love yet unleash a horror such as Abaddon onto them seems rather confusing. In Revelation, it is vague who will be marked astray and hence save them from the tortures of Abaddon.

Now, that you know more about Abaddon, it may allow you to shed light on the intricacies of religion. A very good point to ponder over is the relationship between kindness and cruelty. What is it really that makes God tell his creations of his forgiveness, love, and care and yet subject them to infinity of horror at the hands of a creature like Abaddon.