Freaked DISCOVER THE ART OF PUBLISHING
Home Art “The Hands Resist Him”: eBay’s Most Haunted Painting 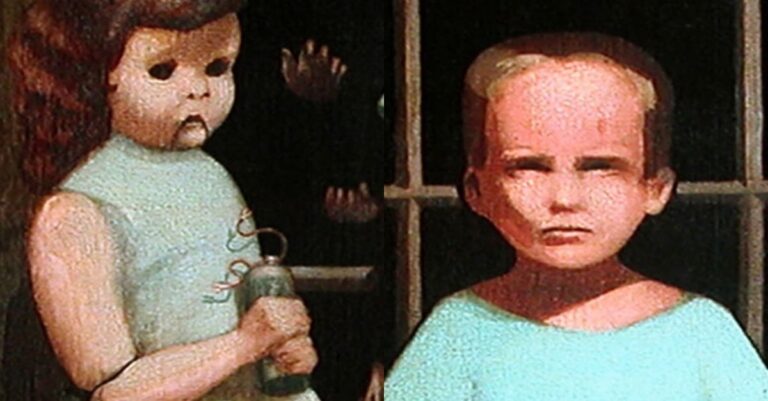 In 1972 in California, artist William Stoneham was under a contract to produce two paintings every month for $200 for a gallery owner. He took inspiration for one of his drawings from a poem that his wife had written. The result was a terrifying illustration that soon became incredibly famous. The poem was titled “Hands Resist Him” and it spoke about the childhood of Stoneham as an adopted kid. The visual inspiration behind the illustration came from a photograph that his adoptive parents had taken of him as a young boy. He was standing in front of a glass door accompanied by a little girl from the neighborhood.

The creepy painting that he created transformed the girl into a doll without eyes. She held an odd contraption in her hands. The glass door behind them shows children’s disembodied hands rising from the darkness. It is a haunting sight – but the internet lore believes that it is haunted, too. In 1974, John Marley, the infamous horse head actor from the Godfather purchased “The Hands Resist Him” at an art show. The event was curated by Charles Feingarten and art critic Henry Seldis attended the event too. Henry brought up the painting in his review of the event for the Los Angeles Times.

Then, the deaths started. In 1978, Seldis passed away. Three years later in 1981, Feingarten died and in 1984, Marley too passed although he had long sold the painting.

For a while after, the painting disappeared. Later in 2000, the painting resurfaced on an eBay listing. The horror story that accompanied the painting was: “WHEN WE RECEIVED THIS PAINTING WE THOUGHT IT WAS REALLY GOOD ART. THE CHILDREN IN THE PICTURE WERE FIGHTING, AND COMING INTO THE ROOM DURING THE NIGHT,” the original seller’s four-year-old daughter claimed.

The seller was alarmed at the stories and set up monitoring devices for three days to note any motion in the room. He noted that the boy in the picture “SEEMINGLY EXITING THE PAINTING UNDER THREAT.”

The painting is posted alongside the disclaimer: “WARNING: DO NOT BID ON THIS PAINTING IF YOU ARE SUSCEPTIBLE TO STRESS RELATED DISEASE, FAINT OF HEART OR ARE UNFAMILIAR WITH SUPERNATURAL EVENTS.”

Additionally, the seller notes that, “THIS PAINTING MAY OR MAY NOT POSESS SUPERNATURAL POWERS, THAT COULD IMPACT OR CHANGE YOUR LIFE.” Many users responded to the listing by stating that they experienced supernatural occurrences merely after viewing it.

Ultimately, gallery owner Kim Smith in Grand Rapids, Michigan bought the painting for $1,025. He has not reported any unusual phenomenon to this day and it remains in his gallery’s storage. According to Kim Smith, he turned down multiple offers for the painting that were in “low six figures.”

Stoneham still gets asked about the painting and he responded by painting sequels for the painting. A private collector commissioned him to paint “Threshold of Revelation” and “Resistance at the Threshold.”

In 2016, author Darren Kyle O’Neill published a book about the painting and his encounter with it called The Hands Resist Him: Be Careful What You Bid For. It a dramatized account of what he went through.

“I first saw it online when I was living in Dubai,” the author said. “I printed it out and left it on a side table next to some other documents printed on the same printer with the same paper. Anyway, I went to Italy for a month. When I came back, the air conditioning had gone awry, everything was green mold. The TV, bed sheets, my daughter’s cot and clothing, all of my suits in the closet, and the documents I had printed all green. But right next to them, the only thing that was perfectly untouched was the printout of the painting.”