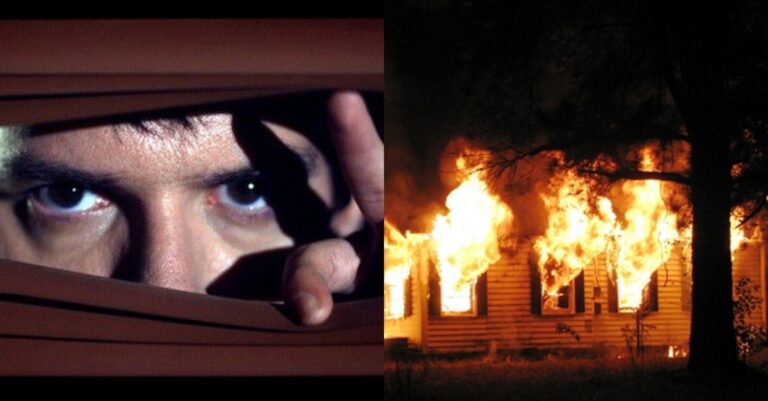 Just about everyone finds serial killers and psychotic individuals rather interesting to read and assess. Horror fans are perhaps even more aware of serial killers’ habits and tendencies than the average person. It is therefore sensible to become wary of people who exhibit traits that serial killers often are known to portray. But, what are the warning signs?

Here are 11 signs that suggest that someone who know might in fact be a serial killer.

Psychologists have proven that many serial killers start off with a love of fire and arson. It is an act that symbolizes power and being in control. One famous example of a pyromaniac is David Berkowitz. Upon being arrested he admitted to starting dozens of different fires around New York city. So, if you know someone who makes light jokes about burning down things and places or always plays with a lighter or flames, be wary of them.

They are involved in substance abuse

Voyeurism or being a peeping tom is a commonly found trait in serial killers. One of the most famous serial killers in history, Ted Bundy, stated that he would enjoy stalking his community late at night often in search of undressing women. According to psychologists, this is an alarming trait because it renders a sense of helplessness in the victim and a powerful advantage to the viewer.

It is not uncommon to see antisocial traits in children. Most of the times this is attributed to shyness. This is why it is hard to pinpoint whether the antisocial behavior is a sign of danger or something the kid will grow out of. However, most serial killers portrayed antisocial behavior to a glaring degree in the earlier stages of their life.

They have trouble keeping a job

Bouncing between jobs due to less pay is normal. However, when it comes to serial killers keeping a job is far more stressful due to the deep rooted psychological problems they possess. Most of them pick blue-collar jobs and unskilled labor as it is easier to move on from these. David Berkowitz worked as a mailman for a duration of time before he was caught.

They come from a troubled family

Failed families are still one of the biggest contributing factors to serial killers. The abuse they face as children becomes ingrained in their psyche and never really leaves. Most often serial killers’ first human victims are their own family members.

At the age of 15, Ed Kemper killed his grandparents. Afterwards, he murders six female college students. He ended that killing spree with his own abusive mother. Kemper decapitated his mother’s corpse and used her head as a dart board. He then disposed her vocal cords in the trash.

Possessing the ability to manipulate people to your will and desire is a powerful trait. Serial killers are known to be powerful and successful manipulators. Convincing people into doing things that they would normally refuse is one rung of the ladder that most serial killers easily step over.

This manipulation is generally achieved by the fake appearance of being emotionally invested in an individual and playing with their feelings. Doctor Harold Shipman is a famous example. He was a medical expert who manipulated patients into performing deadly treatments which ultimately killed them.

They possess an unusual IQ

Serial killers fall into two categories of intelligence, both of which are unusual – either too high or too low. The ones who score too high are the ones who possess outstanding intelligence, like Ed Kemper for instance. He managed to manipulate psychiatrists into letting him go after he had killed his grandparents. Upon leaving he murdered 8 more women.

Those who teeter on the lower edge of intelligence are those who leave behind traces of their murders. They are disorganized and some famous examples are Ted Bundy and John Wayne Gacy.

Not a very common trait in serial killers, but still a predominant one, self-mutilation has been witnessed in many serial killers. This act signifies self-destruction and although it starts small, it can progress remarkably. Albert Fish is one such serial killer who was known to stick needles into his pelvis.

Educating one’s self about the possible traits and habits of serial killers is an important habit. You never know whether the people who surround you are actually dangerous or not. These are just a few signs to be on the lookout for if you are getting the creeps from anyone.