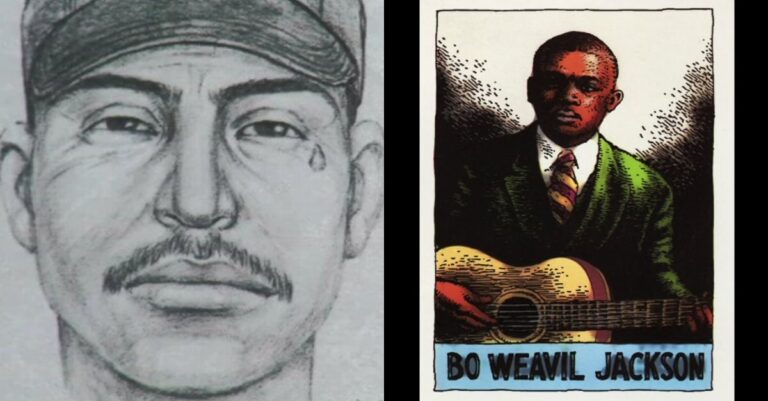 It’s amazing how some people can get involved in memorable events without anyone discovering their true identity at the end. Being found dead or committing a number of crimes are very common cases related to unidentified persons who usually generate a very mysterious environment around the case. Let’s know more about the stories of 10 of these people.

Oakland County, Michigan, between 1976 and 1977, was terrified by a serial killer they called “The Child Killer County Childhood”, who  kidnapped and murdered four children.

One day, a man, named Allen, called psychiatrist Bruce Danto to tell him that he had information and evidence about his roommate, Frank, was the killer they were looking for, so he agreed to meet the psychiatrist in a nearby gay bar. When Danto arrived to the bar also was the police Jerry Tobías, which had a confrontation with a client of the bar. After the lawsuit the unknown man left the bar, and since Allen never arrived, he is supposed to be the man with whom the officer had problems.

Nothing was ever heard about Allen or Frank again.

A latin man, called “the teardrop rapist”, has terrorized Los Angeles for more than two decades and is named because his victims describe the man with a teardrop tattoo near his left eye.

The first attack occurred in 1995, followed by others in 2005, 2010, 2011 and 2013 attributed to it by DNA evidence. Men like Luis Lorenzo Vargas have ended up in prison accused of committing crimes that are actually the rapist of tears, but Vargas managed to revoke his sentence with the DNA evidence that was obtained in 2015 that proved his innocence.

The true rapist has not yet could be identified.

An old man walks into the Clarence Pub in Greenfield, England, on 11 December 2015, and asks people to place information on the fastest route to reach the “top of the mountain”, even though he did not carry the suitable for climbing. The old man’s body was found on the top of Saddleworth Moor the next day.

The man rode 320 kilometers from London carrying only £130 and a few train tickets in his pocket. He was named “Neil Dovestone” because the last time that was saw was at Dovestone Reservoir The only clue he had was a bottle of empty sodium thyroxine, which are only manufactured and distributed in a factory in Pakistan, but this did not help to discover the identity of the man.

In a second hand shop of San Angelo an old man falls dead after suffering a heart attack, although his identification said “Roger Smith” turned out to be false and it was obtained that the man had lived in Texas under three other false identities along the years.

The man smoothed and damaged his own fingerprints, for which he could not be identified, this led him to be suspected of having a kind of criminal history.

The man will be known as “San Angelo John Doe” until he can be recognized. Although, for a facial recognition, professionals thought for a moment that he was the wanted Australian fugitive Elmer Crawford, who disappeared after murdering his wife and three children in 1970, but this idea was discarded after obtaining the results of the DNA tests.

The media indicated that Jackson was from the Carolinas, and others say that he made presentations on a street in Birmingham, Alabama.

Jackson recorded 13 songs, and his skills were praised by the blues historians, but apparently no other documentation was found of the man, so his true identity is still unknown.

In the wooded portion of Lake County, Florida, a decomposing body was found on September 25, 1988. The cause of death was unknown, but they thought the body was of a woman, since it had signs of having given birth in some time and had breast implants.

The victim could not be identified, they gave the name of Julie Doe and in the tests of DNA that were realized in the 2015 obtained a new finding, the victim had male DNA, therefore was transgender.

This fact made sense because in 1988 this type of surgery was not common but even with this revelation its identity could not be identified.

On the shore of one of the deserted islands of the north coast of the Netherlands, on July 16, 1995, the body of a man was found and near it was a candle with the initials “HB”. The man wore a watch Seiko bracelet sold in Sweden and on the back had the number “553978” inscribed.

These objects were taken as clues to the case, because the man had no identification and the remains of the possible yacht had disappeared into the sea. Although a subject DNA profile was extracted, he remains as an unnamed sailor.

7 banks in Wheaton, Illinois, Chicago, were stolen by a man that wore a mask and had a semi-automatic pistol. This man was nicknamed “The Wheaton Bandit”.

His last known robbery was on December 7, 2006, before stopping entirely. As he has not committed another robbery, due to the five-year statute of limitations, he can no longer be accused of any of the robberies he committed.

Johnny Lee Mills was the name given to a teenage fugitive by St. Louis police after being arrested and taken to a shelter for children in Maryland Heights, Missouri.

On September 21, the child fled the shelter and his photograph and vital statistics were provided to the National Crime Information Center and the National Center for Missing and Exploited Children.

Until now, nothing is known about the boy.

On the 401 freeway near Toronto, a Toyota Corolla caught fire by crashing into a Purolator truck on the road. The driver, Suimi Habteab, managed to get out of the car, but the woman who accompanied him, and claimed by him that she was his wife, was burned beyond recognition.

Forensics confirmed that the woman had died before an accident, reason why Habteab was declared guilty of intentional fire and indignity to a body.

The researchers found no evidence that Habteab was married. At the end could not find records of the victim so his name is still a mystery.