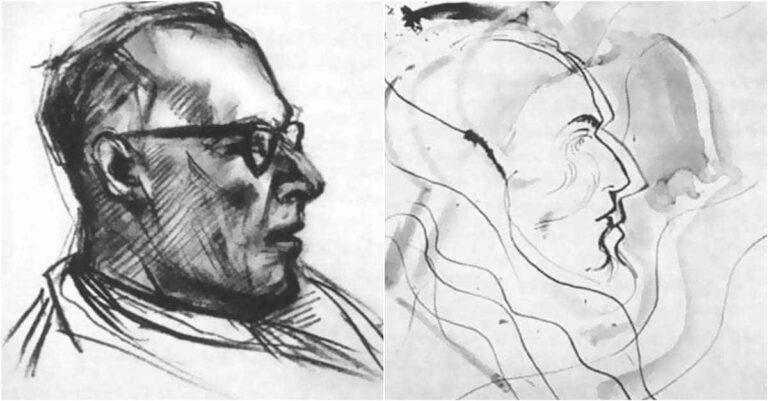 Back in the 1950s, the US government conducted plenty of experiments involving psychotomimetic drugs. In some of these experiments, scientists gave human test subjects measured quantities of LSD and then observed their behavior that followed.

In one particular instance of these experiments, a University of California-Irvine psychiatrist named Oscar Janiger- well known for his work on acid, provided him with an activity box that contained plenty and plenty of crayons and asked him to draw out his experiences when on LSD. And as you will see in the following nine images, the outcome is just as insane as you’d expect

An attending doctor notices – The patient decided to start drawing with coal. The subject of this experiment describes his state – ‘Condition normal… no effect from the drug yet’.

A change was noticed, the subject seemed elated.  He reported – ‘I can see you clearly, so clearly. This… you… it’s all… I’m having a little trouble controlling this pencil. It seems to want to keep going.’

Patient seems to be very concentrated on his drawing. ‘Outlines seem normal, but very vivid – everything is changing colour. My hand must follow the bold sweep of the lines. I feel as if my consciousness is situated in the part of my body that’s now active – my hand, my elbow… my tongue’.

The patient appeared to be very affected by his pad of paper. ‘I’m trying another drawing. The outlines of the model are normal, but now those of my drawing is not. The outline of my hand is going weird too. It’s not a very good drawing, is it? I give up – I’ll try again…’gripped

Patient ensues rapidly with yet another drawing. ‘I’ll do a drawing in one flourish… without stopping… one line, no break!’ Upon finishing the drawing the patient begins laughing, then jolts as he is shocked by something on the floor

Patient attempts climbing into the activity box, and is generally distressed – responds leisurely to the idea he might like to draw some more. He mostly stopped responding verbally at all. ‘I am… everything is… changed… they’re calling… your face… interwoven… who is…’ Subject mumbles faintly to a tune (appears to match ‘Thanks for the memory’). He changes medium to Tempera.

The patient returns to his bunk, and just lays there for around 2 hours, randomly waving his hands in the air. His return to the activity box is without warning and intentional, this time he picks watercolor and pen. ‘This will be the best drawing, like the first one, only better. If I’m not careful I’ll lose control of my movements, but I won’t because I know. I know’ – (he then repeats this numerous times) Subject then makes the final half-a-dozen strokes of the drawing while charging back and forth in the room.

The patient continues walking about the room, intersecting the area in different variations. It’s about one and a half hours until he sits down to draw again – he seems to be over the effects of the drug. ‘I can feel my knees again, I think it’s starting to wear off. This is a pretty good drawing – this pencil is mighty hard to hold’ – (he was holding a crayon).

The patient returns to his bunk bed and sits. He reports the effects have worn off save for the distortion of our faces from time to time. We ask for the last drawing which he draws with little excitement. ‘I have nothing to say about this last drawing, it is bad and uninteresting, I want to go home now.’

Things start off normally, but it wasn’t long until his grasp of reality and perception started to warp, and his work (which was recently uploaded under the handle juraganyeri) capture in amazing detail the multiple stages of his drug-fueled journey, from the start of his trip right through to the end.