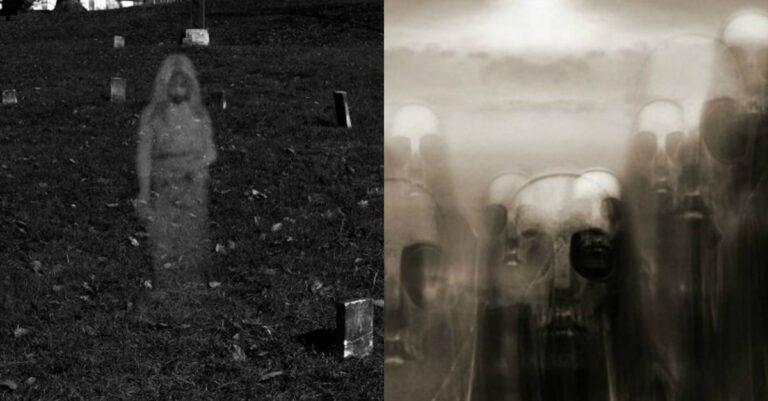 Imaginary friends are considered by all parents as a natural part of any kid’s childhood. We all had some as kids and it was completely harmless fun. But what happens when things take a turn and those imaginary friends creep out of the shadows? A concerned mother took to Reddit to ask other parents and guardians about these disturbing tales. The responses she received were chilling.

From creatures of the night to dead children bidding their time in closets, parents all around the world share their terrifying tales right out of the mouths of babes. Regardless of whether it is an overactive imagination or not, these encounters are downright haunting. Some of the best stories were collected from parents all over the world to share some of the creepiest imaginary friends of children.

I Shot And Killed His Whole Family

“My little brother’s imaginary friend, Roger, lived under our coffee table. Roger had a wife and 9 kids. Roger and his family lived peacefully alongside us for three years. One day, my little brother announced that Roger wouldn’t be around anymore since he shot and killed him and his whole family.

I don’t know if he remembers any of this, but his genuine lack of remorse was very disturbing.” – ritzcharlatan

The Easter Bunny Is Here

“When I was 16, I babysat twins who were in the third grade at the time. They always spoke of a man in an Easter Bunny costume, and they were terrified of him. One day I was babysitting, and one twin was in the shower. His brother and I were sitting downstairs watching television when all of the sudden, he said, “you need to go check on Matt.”

Seconds later, Matt yelled, “He’s in here! He’s in here!” I ran upstairs, and I had to check every room before he would calm down. I’m not sure which part of the experience freaked me out the most.” – NiceColdPBR

“My son from the age of three always tells me about the “creeper man” who lives in my mom and dad’s bedroom. He brings it up after he visits them. I made the mistake once of asking what he looks like. My

son said, “Oh, he doesn’t have a face.”” – TravelsWithTheDoctor

Dead Girl In My Closet

“When my daughter was three she had an imaginary friend named Kelly who lived in her closet. Kelly sat in a little rocking chair while she slept, played with her, etc. Typical imaginary friend s***. Anyway, fast forward two years later, the wife and I are watching the new Amityville (the one with Ryan Renolds) and our daughter walks out right when the dead girl goes all black eyed.

Far from being disturbed, she said, “That looks like Kelly.”

“You know the dead girl that lived in my closet.”” – BrownXCoat

Dead Boy In A Cemetery

“My folks’ farm surrounds a cemetery, and my dad and my niece were walking down there. My niece (4) looks up and says “What’s that boy doing up in that tree?” There was no boy, but she insisted there was and could describe him.” – themightyspin

“My daughter used to tell me about a man who came into her room every night and put the sign of the cross on her forehead. I thought it was just a dream. Then my mother-in-law sent over some family photos. My daughter looked right at the picture of my husband’s father (who has been dead for 16 years) and said ‘That’s the man who comes into my room at night!’ My husband later told me his father would always do the sign of the cross on his forehead when he was young.” – Rcrowley32

“When my boy was 4, his imaginary friend would sit in the corner of the room when you switched off the lights and light the room with red glowing eyes.” – starlinguk

“My cousin, when she was 5, and I was 17, had a stuffed rabbit that she talked to and carried everywhere. One day she was asleep on the couch while I was watching her, and she woke up and started yelling at her rabbit for no reason. One minute she was knocked out, the next, she’s awake, glaring at her rabbit, yelling, ‘No! You can’t do that! That’s bad! Don’t do it!’ I asked her what was wrong, tried to get her to stop, but she wouldn’t listen. I finally just took the rabbit up to her room, and when I came back down she was asleep on the couch again. F*** whatever that rabbit was planning on doing.” – trethompson

Serial Killer In The Making

“A parent of one of my students told us in a meeting that she was concerned because her son (7 years old) talked about an invisible ghost who would talk to him and play with him in his room. He said the ghost was called The Captain and was an old white guy with a beard. The kid would tell his mom that The Captain told him when he grows up his job will be to kill people, and The Captain would tell him who needed to be killed. The kid would cry and say he doesn’t want to kill when he grows up, but The Captain tells him he doesn’t have a choice and he’ll get used to killing after a while.” – MidnightXII

“I was seventeen and babysitting a friend of the family’s six-year-old. He’d been in bed a couple of hours and I just peeked in to check on him. He wasn’t in the bed and when I opened the door wider, I saw he was standing in the corner, facing the wall.

Old Lady In The Dead Of Night

“When my nephew was 3 or 4 there was ‘a lady’ that sat at the end of his bed most nights, he said she had old clothes and would often keep him awake at night talking to him. He got really worked up when no-one else could see her, adamant ‘the lady’ was there and would visit him at night.

He spoke about her with such conviction, my sister moved house shortly after.

Recently her 1yr old, my niece, has been seen at roughly the same time (around 3.45am) a few nights, stood in the corner of her cot, talking (babbling) to an empty corner of the room. Freaky. I think my sister will soon be able to build a new house with the amount of bricks that have recently been shat.” – ChronicleUK

“Kid I used to babysit had imaginary friends. They were dead. One had no head. One was an old lady. They were both bloody. The one with no head had insides sticking out of his neck.

I didn’t ask him questions about them because f*** that.” – Baja_Ha

Emily Made Me Do Horrible Things

“When my sister was probably about 6 or 7, she had an imaginary friend named Emily. She told us Emily lived in her closet, wore an old black dress, and had long dark hair and she was the same age as my sister. My sister played with Emily constantly. My parents started noticing my sister acting weird. Just sitting in the middle of her room whispering to Emily quite a bit and acting a lot more distant towards them. I remember a very specific day, my brother was walking by her room and my sister was sitting in the middle of her room….but she turned around and hissed at him. He was scared shitless. He told me it didn’t even look like my sister. My parents ran up to her room and I could hear my sister just screaming and screaming.”

“I have no idea what happened in that room but I ran to the bottom of my stairs and the screaming stopped, I saw my parents holding my sister crying their eyes out, she was sobbing as well. I’ve asked her about it today. She’s 24 now. She told me that Emily used to tell her to do horrible things to herself. She actually used to wake up on the roof and not remember how she got there. I’m not kidding.

Apparently, Emily absolutely hated my parents so she turned my sister against them. She hates talking about it so I never brought up that specific night. This all happened at my old house. When we moved into a different house, Emily was gone. I’m not making any of this up. My sister’s little friend was a really big deal to my family and messed things up for a long time. I’m just relieved we left that house.” – Gooddaybrittney

“She Wants Me To Hurt You”

“My mom tells me that when I was really young, I had an imaginary friend named Jim-Jim that (as I used to say, she says) had “black eyes, black hair, and looks like paper”. She and I assume that I meant that it had really white skin. It creeped her out because Jim-Jim was one of the first things she ever heard me say and she had always found me laughing or crying at a certain corner of my bedroom since I was a few months old.

There was no mention of Jim-Jim in the house after that.” – Hatweed

“My wife and I overheard my 2year daughter on the baby monitor wake up on Saturday morning and say “what? OK, I’ll tell her” then get up and come into our bedroom and told my wife, “Mary says you’re doing a good job.” Mary was her grandmother that she was extremely close too that passed away.” – Enxer

From dead grandparents appearing in the middle of the night with terrifying orders to sadistic unseen creatures who dwell on fear and misery, these stories certainly bring out the terror in us. Babies are supposed to be darling little angels. Maybe that is why the demons try so hard with them.