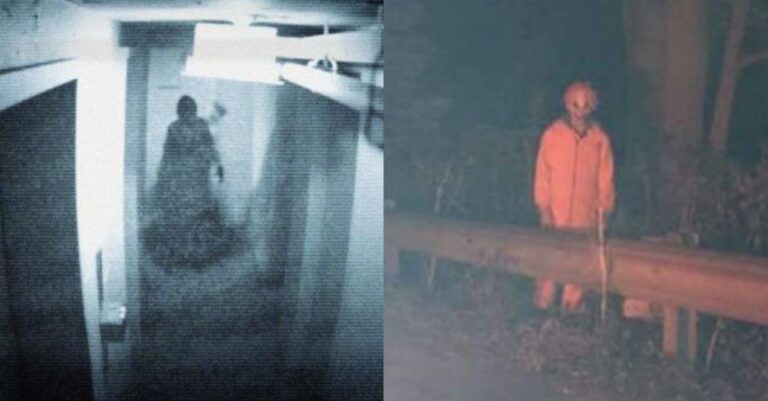 Police officers usually witness horrible scenes of crimes, they have to give bad news to the relatives of the victims and in spite of that they do not usually receive all the recognition they deserve. But sometimes they have answered emergency calls, that are not the ones they are used to receiving, and when they arrive at the place they are in a situation that they had not imagined before. We tell you below 10 of these stories.

New Mexico, 2014. Officer Karl Romero was in the curator of Hispaniola watching the cameras installed around the place, when suddenly noticed something strange in the camera that was pointing to the entrance of the station, at first he thought it was an insect but then realized that the white spot had legs and that it could only be a ghostly figure.

The next day Romero told his colleagues about his experience and how the figure could not be human because the door was closed and the alarms activated, immediately several of his companions commented that on occasions they had heard strange noises and strange sightings in the lobby.

Romero attributes these phantom appearances to unresolved crimes over the years.

The current retired agent Frank Marra, in his police days, was in charge of reviewing the wreckage of the World Trade Center in September 2011.

Later, in 2013, while conducting an interview of what happened in 2011 recalled something paranormal that he  witnessed in the place. Marra saw in several ocations, while working, a black woman who was wearing a red cross uniform holding a tray of Sandwiches but disappearing every time she tried to see her better.

Several officers also claim to have seen large shadows and black masses in the rubble.

1977, Enfield. Peggy Hodgson said that her house had been infiltrated by something evil and that her daughter, Janet, told her that the beds were shaking, even when she  confirmed some strange noises she saw the closet in her children’s room moves. All this caught the attention of Ed and Lorraine Warren, paranormal investigators.

The people thought that Hodgson and his children were lying. However, WP Carolyn Heeps confirmed in a statement to attend one of those events when she saw one of the chairs of the house float and move.

The family called the police, but they left the house and said they could not help the family because there were no perpetrators at home.

These events, certain or not, appeared in the famous film The Conjuring 2.

Sheriff Dave Murphy was a skeptic of paranormal things. But in 2012, when he worked in security at the Capitol Theater in Salt Lake City,  saw some dark shadows moving between the walls one night and the doors began to shut themselves up while there was no one else in the theater.

Following that, Murphy listened  voices and spectral music, suddenly the ghost appeared in the middle of the stage and next to Murphy, that was in the control room, a woman appeared dressed in clothes of the years 1900.

He also commented that the shadows he saw the first time attacked him because they wanted to get him out of the building.

The administrator of the Salt Lake County Center also got to experience some of those paranormal events and believes that the ghost is Usher, a boy of 17 years that died in 1947 in a fire in the theater.

In July, 2009, a retired police sergeant was driving near Silbury Hill, when he suddenly noticed three forensic officers dressed in white overalls standing on a field and watching the ground. The officer managed to see that the three figures were blond, were more than 2 meters tall and emitted a sound like reverberant electricity as he approached to investigate. When the figures noticed him, they backed off running at a speed that no human could reach.

The sergeant decided to contact the UFO experts and told them that those things were studying a circle that appeared in the crops, days before.

He was sure that what he saw was something out of this world.

In 2015, Jennifer Groesbeck, 25, drove home with her baby Lily, a year and a half old. Suddenly her car crashed against a concrete barrier, which made them end up face down in a river, past 14 hours a fisherman noticed the accident and calls the police.

Immediately, the officers came on the scene. Officer Tyler Beddoes was one of the first to arrive and saw an arm through the window of the submerged car, he and three of his companions jumped to the water in search of survivors, then heard the voice of a woman who shouted at them motivating them to save a life. When they reached the car, Jennifer Groesbeck was dead and had been for a while, but noted that Lily was unconscious, face down in the water, but alive.

But the cops still do not know where the mysterious voice came from that encourage them to quickly enter the water and manage to save Lily.

#7 Don Decker And The Devil

1983, Stroudsburg, Pennsylvania. The recluse Decker is on compassionate leave to attend his grandfather’s funeral and is staying at his friend Bob Kieffer’s house, Decker was washing his hands in the bathroom when he suddenly fell to the floor stunned and with scratches on his wrists.

After this, he ran to tell his friend that in the bathroom he saw an old man with a crown and immediately the water began to drip from the ceiling and walls.

For all this they decide to call the police and things were getting worse when Decker was being thrown against a wall with new scratches in the body.

Officers John Baujan and Richard Wolbert arrived at the house, but Wolbert was not convinced of what was happening and left the house without a report.

When Decker was taken back to jail, some of the officers observed that water ran through the walls of his cell and water with the consistency that the silicone appeared on a supervisor’s shirt.

Most of the officers are convinced that Decker was possessed by a demon, which gave him supernatural powers.

1980, at the end of December, James Penniston was stationed at RAF Bentwaters. Penniston was the Chief of the police team who was charged with investigating an air crash, after being informed of unexplained lights.

He and other two officers met with an unknown ship in the form of a triangle resting on three legs on the ground. The men said that the next thing that happened was something totally paranormal, their radios did not work in the presence of the ship, which reflected yellow and blue lights, and the air crackled with electricity as it brushed against it.

Immediately, about 80 officers were found around the ship, scribbling the symbols on the side of the ship and measuring their dimensions. The ship suddenly rose silently from the ground and made its way through the forest, all this research had been classified as top secret .

A police captain, in 2014, corroborated the story of a haunted house in Gary, Indiana, confirming that it had something evil. The mother and grandmother of the family, who lived in the house, claimed that their three children were possessed by evil entities, who made them do strange things and even made their eyes out of their heads.

In addition, mysterious coal appeared throughout the house and a photograph with a figure on the porch of the house, which was later destroyed by the police department.

The psychics came to the house and claimed it was inhabited by more than 200 demons who possessed the three little ones. In the end, the family moved out of the house and the “house of demons” was bought by Zak Bagans, executive producer of Ghost Adventures, which destroyed it in January 2016.

Maurice Theriault, better known as Frenchy, suffered many abuses by his father and witness a terrible event in his family’s stable that is not yet explained, but is known that Frenchy participated in horrible acts after this.

As the child grew older, he realized that he had superhuman strength and knew things he had and had never heard of. With the years he settled in Warren Massachusetts in 1985, he married and lived with his wife on a farm. But everything was not so good, because sometimes there was blood on the walls of the house, she heard voices and things disappeared.

There were also some unexplained explosions and events continued. When the wife tried to speak or follow Frenchy, he disappeared from sight and appeared in another room, even a policeman came to witness one of those disappearances.

In the end they sought the help of a bishop to perform an exorcism, which was carried out successfully, but Frenchy’s problems continued to be arrested for sexual abuse of a minor.