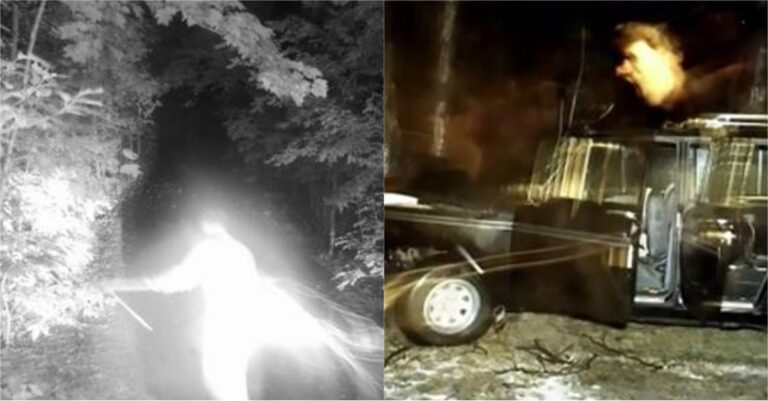 While many people refuse to believe in the paranormal, there are enough sightings all over the world (and the internet) that prove otherwise. Despite the fact that the majority of ghost-sighting pictures and videos posted online have been shown to be fake, there are some real encounters out there. The following are a collection of 12 of the best paranormal pictures to date. Trust me; you might change your mind after you view them.

In 1984, a local teenager fell victim to a car accident. The local police took photos with a 35mm film camera for the record. Once the pictures were developed, the results were intriguing. Over the open side door of the driver, a clear picture of a young man can be seen – his face contorted into a scream.

Ike Clanton dressed up like a cowboy in 1996 and asked a friend to photograph him in the famous Tombstone, Arizona, in Boothill Graveyard. Once the photograph was taken Clanton noticed a man in the background of the photo who wasn’t around at the time of capturing.

He attempted to recreate the photo with his friend in the background. He discovered that it was impossible to be in the picture without having legs visible.

The Woman of Alcatraz

Alcatraz is a famously haunted place in the USA and is a former prison site. It was home to murderers, gangsters and bank robbers. This haunting image shows the shadow of a girl staring through the window at the photographer from inside the inmates’ visitation waiting room.

Sheila Sillery-Walsh, the photographer, said ‘When I glanced at the photo on my mobile, I saw this dark female figure in the picture. I looked at the window again, and there was no-one in the room.”

The Ghost of Guildford

In March 2012 this photo appeared in England’s Surrey Advertiser. It was taken at The Mount in Guildford, and the photographer, Mark Baker, 37, confirms no one was around and that the photo was never altered. The eerie picture shows a white figure standing in the centre.

A law enforcement officer from Georgia and a “Coast To Coast AM” guest, Dingo, posted a creepy image titled “Strange Figure on Wildlife Camera”. Dingo says that he alongside another officer responded to a call about trespassing on private property. Although they found no one, the property owners set up an infrared wildlife camera the next day to catch any trespassers. They caught something else altogether.

Douglas Tipold was called as a firefighter to a burning house in Gary, Indiana. While waiting for the hose to be unravelled, Tipold took a few photos of the fire to document the scene. Later that same night, Donna, Tipold’s wife, noticed a strange shadowy figure in flames while going through the photos.

Ghost in The Old Truck

As an abandoned truck was being towed away, a police officer snapped a photo of it. It appears as though an apparition resides inside.

Erin Potter’s family in Kirtland, Ohio, noticed an odd figure in a photograph of their daughter. At the time that the photo was taken Erin was battling leukaemia. In the photo, she can be seen running through the yard with sparklers. A ref figure can apparently be seen next to her. The Potter family believe that it is the Virgin Mary.

Kevin Potter said, “I know she’s not alone, I know we are not alone and people who don’t want to believe it, that’s okay. Whatever happened, you know something powerful and special was there with us. I definitely have my moments when I’m falling apart, and I’m terrified, and I literally grab my phone, and I stare at that picture.”

Erin Potter is a survivor of cancer today, and her family believes that it was a miracle.

This famous photograph was taken in the abandoned hospital at the Waverly Hills Sanatorium where a morgue and body chute from back in the day still remain intact. The chute is connected to an underground room where corpses were kept before cremation. Missouri Paranormal Research Investigator and professional photographer, Tom Halstead, took the photo during an overnight investigation at the haunted Sanatorium.

The Most Haunted Nightclub in The World

In Wilder, KY, Bobby Mackey’s Music World is known as “the most haunted nightclub in the U.S.A.” Wanda Kay, the club DJ and tour guide, says this photo shows a ghost climbing a staircase that now stands barricaded.

Trevor Tye, a coach driver, was leading a coach full of tourists to the royal palace. While waiting, he went in and took some photos himself. When he got home and reviewed the pictures from the marble staircase in the Palace’s public entrance, he saw what looked like the figure of a kneeling young woman. He sent the image to the palace and was informed that the ghost had been spotted multiple times before in the same location.

Nathan Ziegler, a photographer, set up the time-lapse camera in the Old Pioneer Cemetery in Milton-Freewater, Oregon, on July 23, 2013, to film the sunset. With 30-second intervals between each frame, Ziegler noticed a strange figure in one of them while reviewing frames. The figure appears at 9:08:30 but isn’t found 30 seconds before or after that.

Given that these are all real encounters by people who swore that the photos were never tampered with, it is safe to say that these photographs are legitimate. Taken in notoriously haunted locations all over the world, it would seem plausible that these sightings were actually real.