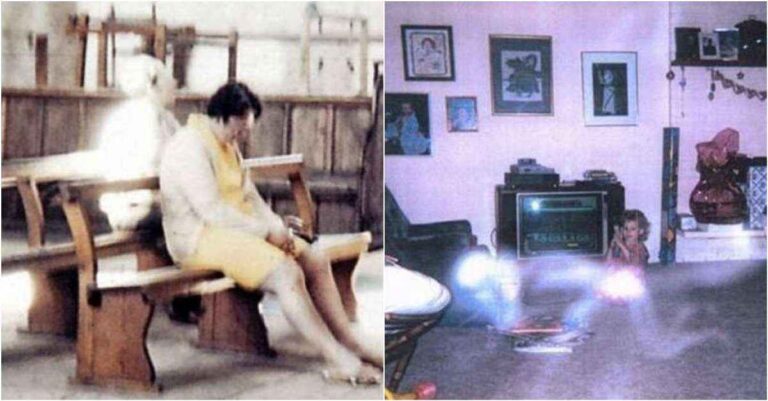 Did you ever ask yourself why so many of us are scared of the dark? What is that dwells in darkness, sending chills down our spines? While many of us believe in ghosts, there is still a large majority that does not. If you happen to be among those who think that paranormal is a load of nonsense, perhaps the following photos will change your mind. These are the 10 best ghost pictures captured that defy all explanation.

Taken from a nurse’s viewing monitor, this black figure was seen looming over a sleeping patient. The patient passed away within a few hours after.

In 2012, this story was submitted to Reddit and the Wisconsin Trail Cam has baffled internet users since. No one can really understand or make out what that the large hunched creature caught on camera is.

The Spectre of Blackhead Lighthouse

Laura took this picture of her friend smoking in the dark in 2009 outside the lighthouse keepers cottage at Blackhead lighthouse, County Antrim, UK. They thought they were alone in the building.

During a get together with friends and family, a woman photographed her mother by the campfire. At the time of taking the picture, the daughter claims her mother was alone.

Christy visited her parent’s home and captured a few photographs. Only after she left did Christy realize that she was not entirely alone.

This photograph was taken by a father of his daughter playing in the living room. A ghostly figure can be spotted in front of the child and it appears as if the child can see it, too.

This photograph was captured in in 1987 at the Fleet Air Arm Centre in Yelverton, Somerset. The woman in the picture recalls feeling oddly cold while posing despite it being a hot day. She also stated that she was alone in the aircraft.

This photo was taken about 15 minutes after a patient of this nursing home had passed away. Before the photograph was snapped, staff members and residents heard odd noises such as doors opening and closing and strange lights appearing.

The Old Lady of the Guesthouse

An empty Victorian guesthouse in Kendal, Cumbria, UK, was razed to the ground. Shortly before the demolition, the hauntings began. The sit supervisor captured this photo right before the tearing down began. His wife later noticed an elderly woman donning large earrings from one the ground-floor windows, staring out.

It is believed that the apparition is the B&B’s late owner Frances Grimshaw, 87, who passed away one year prior to the building’s demolition. Frances son David said: “That is my mother. I’m totally convinced – no one else looks like that. She had glasses and big earrings and she used to wear a dress with a bow at the front. Mum used to stand in that room for hours on the phone – it was the guest house reception and she took bookings from there.”

Alone in The Church

In 1975, Diane and Peter Berthelot visited Worstead Church in Norfolk. While his wife prayed silently, Peter snapped a photo of her. A few months later when looking at the pictures, a friend of Mrs. Berthelot exclaimed, “Who’s that sitting behind you, Di?”

Do you still think the paranormal is nothing more than entities conjured up by people’s imaginations? Have you ever been in a position where you felt a demonic or supernatural entity around?