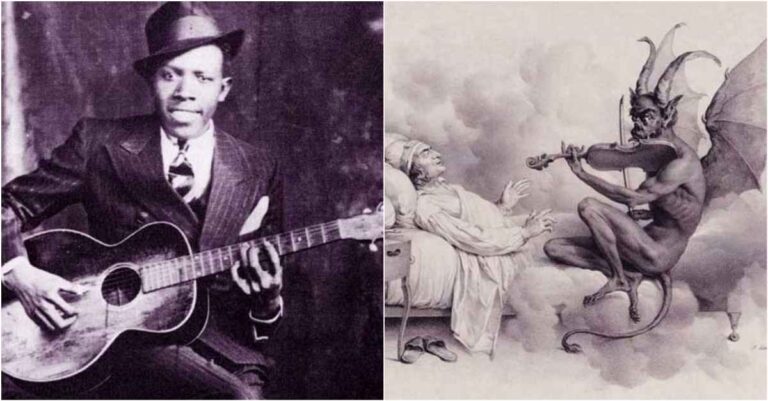 Is it worth selling your soul for?

I mean while it may sound tempting to sell your soul to the devil so you would get whatever your heart desired. You might wanna learn from the people who allegedly sold their soul to the devil. As it did not end well for them usually.

There might be thousands of people who have made a contract with the devil but compiled some of the most famous people who allegedly did contact Satan.

Many people believe that St. Theophilus of Adana is the first ever person to sell his soul to the devil. You see it all started when he was elected unanimously to be the sixth century. However, he denied the prestigious position out of humility. Later another man accepted the position and tried his hardest to make Theophilus’s life a living hell.

So Theophilus started to regret his decision and he summoned a sorcerer who helped him contact the devil. Satan was more than happy to help on one condition that Theophilus renounce his faith in the Christ and Virgin Mary. And so it was that he got back his position as a bishop.

As years went by, he started to regret his unwise decision so he begged for forgiveness from Virgin Mary. He fasted for forty days, after which Virgin Mary allegedly appeared before him and promised him that she would talk to God. And so he fasted for another thirty days and God forgave him.

Three days later though he woke up to see the bloody contract placed on his chest. He asked another bishop about his predicament who burned the contract and finally freed him. He was overcome with joy and died right there and then.

I am sure everyone has heard the saying that the blues is the music of the devil. Well this apparently started with Robert Johnson. Many people believe that he was given his musical mastery by the devil himself. He was born in 1911 and he grew up in Mississippi Delta. And He always yearned for musical greatness so one day he went to the crossroads to get his wishes.

He summoned the devil and he granted Robert’s wishes. People have always believed that his drooping eye was a sign of his evil connection with the devil and that he usually faced away from the audience when he played to allegedly hid his evilness. Johnson mysteriously died in 1938 at the age of 27.

Nicolò Paganini was a brilliant musician born in 1782. He was and Italian violist, violinist, guitarist, and a composer. He was also known for his complex music. There was not one person alive that could play his music perfectly. So as the word of his talent spread, so did the rumors.

Many people believed that he had made an unholy pact with the devil himself and that they even say Satan assisting him on stage. So when he died, he wasn’t even allowed his final rites and a proper burial. He was finally laid to rest ina cemetery in Italy after 36 years.

Who hasn’t heard about Giuseppe Tartini? He is after all the man who gave us the masterful piece known as  “Devil’s Trill Sonata.” He allegedly got this tune in a dream where the Devil played it himself in 1713 in exchange for Giuseppe’s soul. When Giuseppe woke up, he grabbed his violin he tried to recreate the piece and so we were given this mesmerizing piece.

People who saw him play the tune believed that he could not create such a beautiful tone by himself without any help from the outside. Giuseppe however was never satisfied with the piece as it was not even close to the original.

Grandier was born in 1590 and he was a French Catholic priest. He was known for having sexual relationships with more than a few nuns. He also didn’t like the Church’s stance on celibacy which people didn’t like. So he had many rumors spread about him. Many of nuns accused him of using witchcraft to lead them to bed.

So a trial was started when he was soon acquitted. It was also quite common knowledge that France’s chief minister, Cardinal Richelieu didn’t particularly like Grandier. So the chief minister ordered another trial.

This time however, a document was allegedly found with Grandiers belongings that had strange occult symbols on it and apparently said that Grandier would get “the love of women, the flower of virgins, the respect of monarchs, honors, lusts and powers.”

Whether he was framed is still unknown. What we do know is that he was burned at the stake in 1634.

Jonathon Moultan was born in 1726 and his story is quite bizarre. You see he was a famed soldier of colonial America. He had become one of the wealthiest men after the war which led to the rumors that he had made a deal with the devil. The rumor was that he had struck a deal with Satan.

The devil would come to his house every month and fill his boots with gold coins. Now this was quite a lot of gold but allegedly he grew greedy and devised a plan to cut a hole in the shoes sole and put it over his basements roof.

When the devil learned of Jonathon’s scheme, he burned down his whole house.