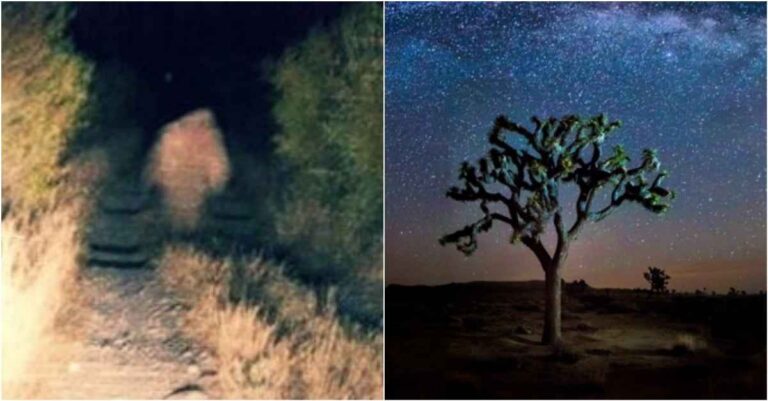 The Yucca man was first spotted in 1971 by a Marine on guard duty. On the morning of his shift, in Twentynine Palms, he was found with his rifle bent in half. Barely coherent, the Marine explained how a huge man lunged at him in the dark. As the giant was approaching closer, the Marine saw how hairy he was and lifted his rifle, ordering him to halt. However, the creature took the rifle, bent it in half and knocked the Marine out.

An investigation was launched and both the FBI and CIA were involved. The same night, two more sightings of similar figures were reported. One of the reports described a 12-feet tall being accompanied by a smaller figure. Dogs in the neighborhood alerted the residents of unusual occurrences. More sightings surfaced the same year from Joshua Tree employees.

In 1979, a couple stated that a large, hairy man stopped their vehicle in Desert Hot Springs near their condominium. According to the couple, the creature stepped out from behind a yucca bush and stood in front of their car. The creature had long dark hair and its arms hung down to its knees. His chest was as large as a refrigerator.

The same year in Hemet, California, the Yucca Man was seen again, twice. It left behind seventeen footprints each of which was six feet apart and a foot and half in length.

Legends of a so-called “Cement Monster” in Lucerne Valley, who resides in an abandoned cement factory, exist. Two servicemen were returning from the lake in 1988 when a creature so large they could only see its lower half ran in front of their car. The driver braked the car and they set off in search of it with guns. However, they found nothing.

The Face in the Rocks

In the late 1990s, in Joshua Tree, a rock climber returned from climbing and camping trip only to find an unusual thing in the campsite photos. Given that the campsite was close to a crevice, not quite a cave, the photograph showed something that was unmistakably the face of a primate, hiding in.

It is unknown to humans whether the Yucca Man is a paranormal entity, an urban legend, a wild creature.