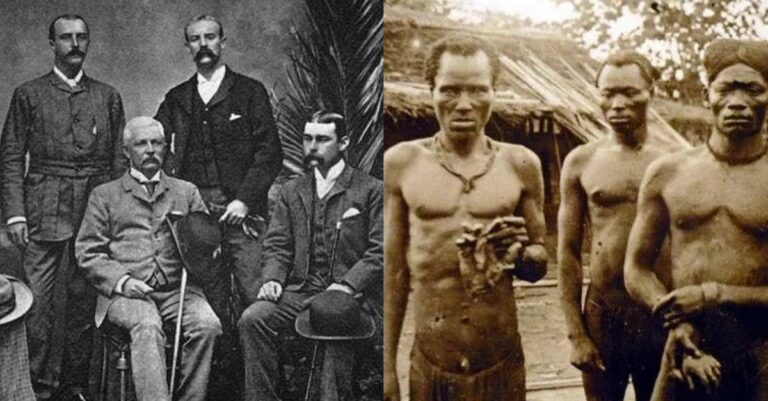 Cannibalism and Africa seem to be two attractions to colonists that never separate from each other. Real life accounts, events, and stories of cannibalism from the dark jungles of Africa keep sending chills to people from all over the world.  We are going to share with you here a real story of a man who found it in him to pay to witness a girl being killed and consumed by humans in front of his eyes. He was James Jameson, heir to the Jameson Irish Whiskey fortune.

Who was James Jameson?

A fortunate man, James Jameson was born to John Jameson, the founder of Jameson Whiskey. He had everything he wanted to live by, no questions asked. When he was a young man, he embarked on a trip as part of the European Exploration trip to the heart of Africa in 1888. The expedition was set to rescue a colonial Governor Emin Pasha who was assumed to be in danger as no news was heard from him since long. Henry M. Stanley was the leader of the expedition and James Jameson accompanied him as a part of the Rear Column of that rescue mission.

The rescue mission went through endless troubles from diseases to isolation from the rest of the world, local enmities, lack of resources, incidents of abuse and even death of many crew members. However, the rescue mission and its details of success or failure is ambiguous as of the Governor’s rescue remains unknown. In fact, once reports surfaced of the chilling and gruesome event that took place in Congo, little heed was paid to the rescue in itself at all. This heinous crime took place at the hands of the rescue mission crew with James Jameson being the mastermind.

The Gruesome Cannibalizing of a Young Girl

The expedition is considered as one of the last European exploration trips into deep Africa in late 1800s. The crew basically set off to rescue the lost colonial Governor of Sudan but James Jameson was up to some other gory adventure for which he used the guise of the rescue mission. The heartless explorer found it enticing to see with his own eyes the blood-freezing human-savoring incident.

The Town was Known for its Cannibalism

The expedition ended up taking place in a town which was famous for cannibalism. The village was called Lukando in the Democratic Republic of Congo. In old times it was called Ribakiba situated near the Lualaba River. This was one of the trade routes for trading slaves and ivory. The village was notorious for cannibalism. James’ curiosity went wild upon learning of this and he became deeply interested in witnessing how people ate one another.

A Slave Girl for the Price of Six Handkerchiefs

It was that cheap! The life of a young girl was equal to 6 handkerchiefs and the heir of James Whisky’s fortune could spare countless stacks of six handkerchiefs to quench his thirst of watching human flesh chewed and bones crunched. So, it was not at all difficult for him to step ahead and pay that minuscule price to buy the life of an innocent slave girl. He paid the guide through his interpreter and the guide informed the village chief and hereby the necessary arrangements were made.

Assad Farran, James’ interpreter swore an affidavit of the whole incidence. He said, “A man returned a few minutes afterward with a ten-year-old girl. Tippoo and the chiefs ordered the girl to be taken to the native huts. Jameson himself, Selim, Masondie, and Farhani, Jameson’s servant, presented him by Tippoo, and many others followed.”

The ill-fated child was bought instantly and was brought to the bloodthirsty cannibals in front of the cold-hearted white man whose curiosity was simply to witness the slave girl stabbed to death and eaten. “This is a present from a white man who desires to see her eaten,” said the man who brought the young girl to people waiting to eat her.

The interesting thing is that James recorded this incident with water paints in his journal which made the gory details clearly available for the rest of the world. This unbelievably gruesome account of human murder and cannibalism was also narrated by a number of crewmen of the expedition.

The girl did not struggle but looked at the people around her who sharpened their knives in front of her. She knew they are going to kill her and eat her. She looked at their faces searching for a speck of humanity that could save her. There was not one man amongst the crowd who had it in him to halt this murder. The natives who spoke her language and understood her feelings were not moved by the spectacle and none even raised a finger to stop this atrocity.  The reports from the eyewitnesses of the event reveal that the innocent girl stayed calm and composed although she was aware of her fate. She gave in to her hungry killers and did not resist while they tied her to a tree.

The sworn affidavit of the Syrian interpreter of James Jameson narrates, “The girl was tied to a tree,’ [said] Farran, ‘the natives sharpening their knives the while. One of them stabbed her twice in the belly.”

He further adds,“She did not scream, but knew what would happen, looking to the right and left for help. When stabbed she fell dead. The natives cut pieces from her body.”

The gory details of the killing of the young girl were recorded by Jameson in watercolors. He sketched six different images with the details starting from her being tied to a tree to the end, when her body parts were cut off and taken away for cooking and eating.  Step by step details: a girl tied to a tree and people around her sharpening their knives; she was stabbed in her belly and the blood was running down her body; tribesmen dissecting her body parts; the last three images were all about men carrying her different body parts preparing them for eating. The surprising thing is that he showed these sketches to the chief for approval.

The story written by James has a different spin of the incident and it seems that James tried to make the event look less gruesome and convicting. He never mentioned his curiosity instead went on dubbing his intentions into just a “joke.” He tells that it all started as a joke and he never thought that people would really kill a girl and eat her. To throw in more innocence from his side he even said that he drew the sketches from her memory later.  Well, nothing was stopping him to rescue the girl from being killed when he watched people getting serious with his “joke.” But Farran the translator has said in his sworn affidavit many facts that match James account.

Jameson never survived to prosper and enjoy his inherited fortune after his cruel “cannibalizing desire.” He fell ill with a fever and died in Stanley Falls on August 3, 1888. On his deathbed, he wrote a letter to his wife who later published it in a newspaper in her best efforts to save his reputation which the varying accounts of the mission had ruined.

This gloomy event came to the public knowledge by the accounts of translator, James Jameson and Henry M. Stanley who led the expedition. Of course, Farran’s version is neutral. Stanley served his own self and tried to lessen the weight off of his conscience. James’ account reveals the real gory incident that took place out of his own desire to see a girl being cannibalized.

People still doubt the event because of its unbelievable cruel details. There are doubts that it was all just a hoax based on what is known of Africa like cannibalism. So, do you doubt that James really paid just six handkerchiefs to buy the slave girl for cannibalizing her? There are reports that affirm that but still, some doubts remain lurking in the background to make us believe it unconditionally.

Out of the series of unexpected and haunting events that took place in history, the James Jameson cannibal affair is one that distinctly stands out. Perhaps it was because of the fame and fortune associated with Jameson or the fact that he was a celebrated individual. However, the pages of history are decked with similar incidents over centuries.