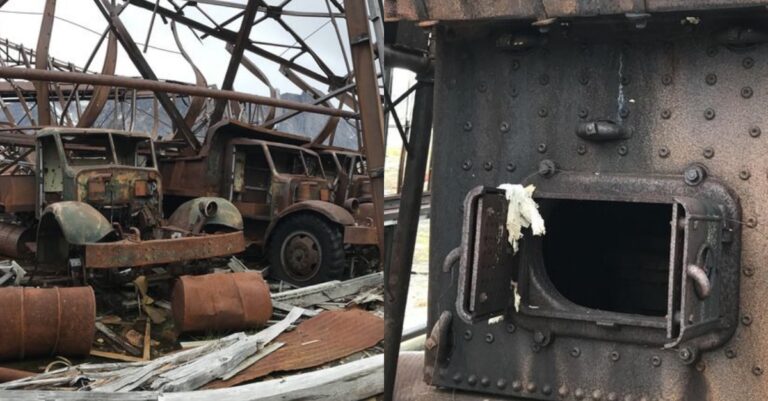 First off – creepy is cool, so hold on to your seats because this is some seriously creepy stuff!

You know the feeling – you’re walking past an abandoned house or building and you get that intense chill down your spine that seems to stick in your head and make it impossible to fall asleep that night. Well, how would you feel if you stumbled across a World War 2 site filled with that same eerie energy, but ten times worse? Yeah, you know it’s got to be haunted! It’s history, and history sticks around!

Recently Imgur user “CanadaSpeedoMan” discovered an airstrip in Greenland, and he had this to say about the fascinating and equally unsettling experience:

“Just last week my wife and I had the opportunity to take part in a backcountry expedition to South East Greenland. After days and miles and miles of trekking through the fjords, we arrived at the site of ‘Bluie East Two’ – it was EXTREMELY remote and pretty eerie to find that far away from civilization. This site was used to refuel planes traveling from the USA to Europe during the war. The site could only be accessed by boat during several months of the year. Otherwise, it was completely inaccessible because of the sea ice. Thousands upon thousands of barrels for fuel were left. Some still with fuel inside. When they abandoned the airstrip, it appears everything wasn’t left as is …The local Inuit people salvaged much of the usable material that could be transported by foot or with their small fishing boats … ALL the wood had to be brought in by boat. There are no trees in South East Greenland. Any driftwood found comes from Siberia … I could have spent a week here and not have had the chance to see everything. Hope you enjoyed!”

Historic sites are always intriguing, and for the ghoulish guys and gals it’s even more so, because like previously mentioned – you know there’s something terribly off about the area! So what do you say – up for a trip to an abandoned airstrip?