Advertisement
Home Creepypasta 10+ Terrifying Stories That Are One Paragraph Long 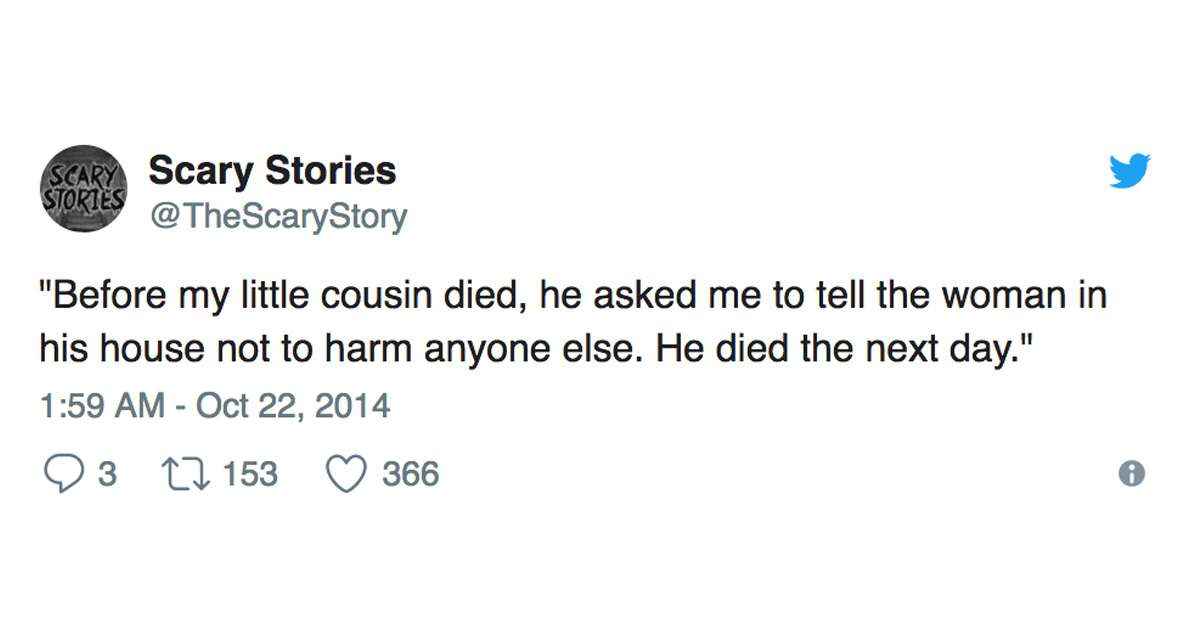 "When i was a kid I played w/ a little girl my age. Turns out it was my great aunt who lived in that house died when she was 6." -CA

"I woke up and saw my mom in the kitchen watching the rain out the window at 2 am. She died in a car crash in a thunder storm 3 yrs ago" -NJ

"A friend asked me to sleepover because she didn't want to be home alone all night, woke up to a picture of us asleep on my phone." -MA

"Last year my friend OD'd. 3 days after his death his mom got a voicemail of him saying I love you -GA"

"I've been haunted ever since I was 9. I've been scratched, burned, pulled, and it's possessed my friends a couple times"- NA

"Lately when I wake up in the middle of the night I can see my dog watching me sleep, he's been dead for three months." – NY

Sometimes when my phone rings it shows me my mom's number and when I answer I hear nothing but someone screaming. My mom died last year.

"A girl who used to live in my house died in a plane crash trying to visit her boyfriend. I see her crying in my kitchen every now and then"

"I woke up around 2:30 am with the piano playing downstairs. I live alone and don't have a piano"- Unknown

I received a text message with a picture attached, as I saw the text, I saw myself, in the same position looking at my phone. -PH

"When I was little my uncle would play with me all the time, I recently found out he died at least a year before I was born." -CA

"My phone rang, and when I answered, an old man said "I'm going to kill your family." I called the police, and they never traced the #" – NA

"I was sleeping one night I woke up to the sound of someone talking in my ear saying " you don't belong here". I live alone" – NY

"My daughter won’t stop crying and screaming in the middle of the night. I visit her grave and ask her to stop, but it doesn’t help" – USA

"Heard my sister singing in the kitchen & moving around dishes, went into her room and she was asleep" – UK

"Last night I was talking to my boyfriend then felt him cuddle me & whisper in my ear I'm sorry baby. He committed suicide 3 months ago."”

Went to the local stables at 6:30 to find footprints going into the barn but not back out…owner's son committed suicide there 5 years ago

"Last night I went to go out for a smoke an when I went to go back in I heard the door lock on its own. I was home alone."

"My brother begs someone not to take him away in his sleep every night at 12:00."

"In one of my dreams I watched my own funeral. Tried talking to people that were there but they would just ignore me."

"Before my little cousin died, he asked me to tell the woman in his house not to harm anyone else. He died the next day."

"I remember playing with a boy that looked just like me, but no one else does. My mom just told me I had a twin but it died in the womb."

"I took LSD, and killed my entire family. Then I got out of my trip, and they were all fine. Worst day of my life." – NA

"Before my little cousin died, he asked me to tell the woman in his house not to harm anyone else. He died the next day."

Batman: The Smile Killer Might Be Based On A Creepypasta