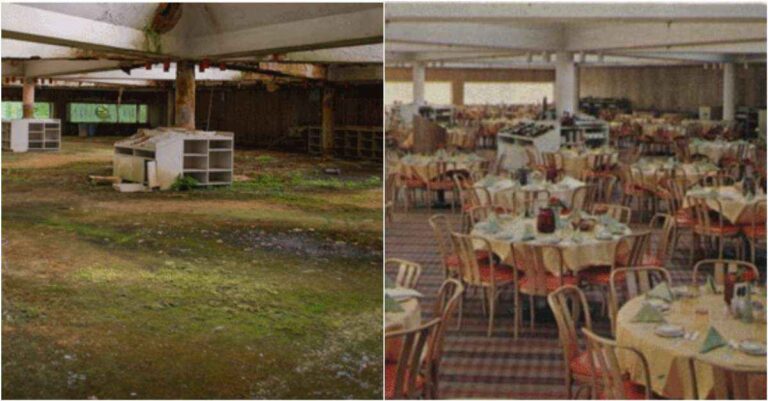 Time lapses are one of the most interesting things to watch and study as different parts of this world transform in front of our eyes to something completely different than where they started from. Check out these unbelievable transformations of different locations from around the world at different times in life.

This indoor pool used to be covered in the warm glow of chandeliers and was air-conditioned from corner to corner. Unfortunately, in the late 1990s, the place was abandoned and no one set foot in it ever again and it became a graffiti art spot.

Just as majestic as its indoor pool, the outdoor pool of Grossinger’s was built in 1949 and cost around $5M (according to the latest rates). Let’s just say a lot has changed since then.

A place of music, charm, laughter, and happiness has long been forgotten and left to be invaded by Nature’s prying hands. Still majestic!

The colorful bowling alley spot has been reduced to a pitiful state ever since the mid-2000s when the spot no longer abided by the collective audience’s likes. Reopened as a summer camp, the Lodge was then once more forcibly shut down by the NY Department of Environmental Conservation.

Yet another marvelous creation from Grossinger that has been inevitably vacated and left for…dead (basically)! Not entirely though, innovative graffiti artists have taken up to redesign the place and make it look less lonely.

Wherever this may be, it looks stunning during both time periods. The ever-growing greenery shrouding the structure accentuates its mysterious beauty.

In 1967, Poconos was bathed in warm sunlight and the mini sandy beach was the children’s perfect play spot. Now? Not so much! Overgrowth and weeds have taken over the small piece of land and the mini beach is no more.

A fire erupted in the same area as this building and wiped out most of the beautiful structure, greenery, and scenery. But the late 60s/early 70s welcomed a similar structure to be built in the same spot. With time, trees shadowed the place and to this day it remains a quaint little place obscured in the woods.

This theater was termed as “the world’s most modern showplace” because of its capacity to hold around 1200 individuals. Even though bare and vacant, the place still maintains its unknown charm.

Some of the vintage orange seats still remain in the same area they were in since God knows how many years. The wooden walls have rotted and decayed, the floors covered in moist moss and the grandeur of the lounge has vanished just as fast as it came.

The vegetation around the water has definitely noticeably grown, altering the whole aura of the place. But more than that, the wooden bridges built above the water have been drowned and carried away with the water’s current.

Somehow, humanity manages to pollute every clean place in this world. The Swim n’ Sun Indoor Swimming Pool at Penn Hills Lodge is an apt example of such.

Designed by the legendary Morris Lapidus, the architect of the Capitol Skyline Hotel Built, this building was opened in 1964 and has stood strong for decades. No longer inhabited or tended for, it’s a wild beauty!

Yet another forsaken theater in Poconos, the last recorded show in this one was displayed in the 90s. After that, no one has set foot in it and the only shows played out there are those of the invisible spirits and demons that have inhabited it.

Once upon a time, this resort offered indoor and outdoor swimming pools, fishing on its shores, white sand beaches, airplane rides, bowling, horse rides, chaise lounges and a bunch of other amenities. Of late, the spot has been the home of Eric Frein (a cop) who was on a manhunt for a criminal who was detained a couple of feet away from Eagle Lake.

The Homowack Lodge in Catskills

A place of usual bustle, noise, laughter, and rowdiness is quite empty now with nothing as much as a shoelace to indicate its previous jolly history.

Architecture in the 70s was completely different than what it is now. This building is a living memory of the color scheme, offices, lobbies, and lounges.

From Beauty to Beast

A true horror! To see such a home being reduced from riches to rags, beauty to beast, buffet to crumbs…it hurts to watch time unravel.