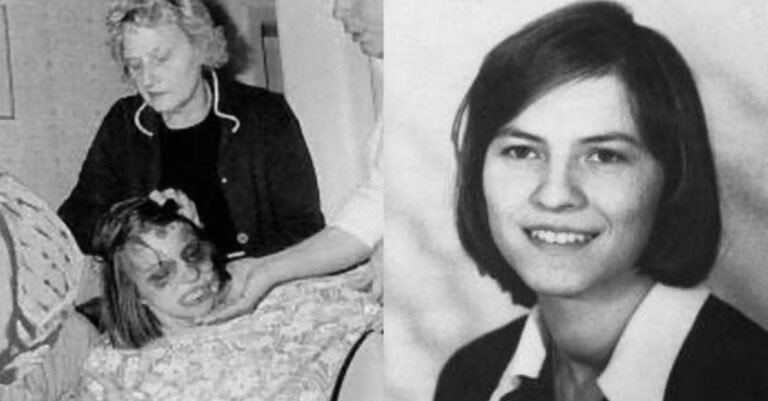 A devout Catholic in the 1960s, Anneliese Michel grew up in Bavaria, West Germany. She regularly attended Mass twice every week. At the age of 16, Anneliese suddenly experienced a blacking out episode at school. Following that, she started walking around in a daze. Anneliese had no recollection of the incident and only took her family and friends’ word for it.

Anneliese As A Child

One year later, the experience repeated itself and Anneliese woke up in a trance and wet her bed. She also experienced a series of spasms and convulsions. Following the second occurrence, she saw Anneliese As A Childa neurologist who diagnosed temporal lobe epilepsy. It is a condition which contributes to memory loss, seizures and auditory and visual hallucinations.

Geschwind syndrome is also caused by temporal lobe epilepsy – a disorder which is marked by hyper religiousness. After she was diagnosed, Anneliese started taking epilepsy medication and in 1973, she enrolled in the University of Würzburg.

Surprisingly, the drugs did not aid her at all and her condition worsened progressively. Although still on medications, Anneliese firmly believed that a demon had possessed her body and that the cure lay outside of medicine.

She reportedly heard demons whispering to her and saw the Devil’s face wherever she went. Her demons would tell her that she would “rot in hell” and that she was “damned” while she prayed. This led her to believe that she was possessed by the devil.

While she reached out to several priests, her requests were turned down. She was instructed to seek medical help and that any form of religious intervention would require a bishop’s permission first.

By the point, Anneliese was experiencing extreme delusions. She would compulsively perform about 400 squats a day, rip her own clothes off her body, and crawl under a table and bark like a dog for days. She also bit off the head of a dead bird, consumed coal and spiders licked her own urine off of the floor.

Eventually, her mother and her found Ernst Alt, a priest who was convinces that she was possessed. Later, in court documents, he stated that “she didn’t look like an epileptic.”

When writing to Alt, Anneliese said, “I am nothing, everything about me is vanity, what should I do, I have to improve, you pray for me.” She even once said, “I want to suffer for other people…but this is so cruel”.

Bishop Josef Stangl, the local bishop, was petitioned by Alt and he eventually approved of the request. Arnold Renz, a local priest, was granted permission to perform an exorcism on the condition that it remain a complete secret.

For thousands of years, exorcisms have prevailed. However, the practice gained popularity in the Catholic Church in the 1500s. Priests would make use of the Latin phrase, “Vade retro satana” which literally means, “Go back, Satan”. Exorcism grew very rare in Catholics by the 1960s, but then it saw a rise again in the early 1970s thanks to a growing number of movies and books such as “The Exorcist”.

67 exorcisms were performed in the next 10 months after the bishop’s approval. Some of these sessions lasted 4 hours. The exorcisms allowed Anneliese to reveal that 5 demons possessed her: Nero, Lucifer, , Judas Iscariot, Cain and Hitler. For the exorcisms to take place, Anneliese had to be frequently restrained.

Anneliese Being Restrained During An Exorcism

These spirits supposedly jostled for gaining power and control of her body and would communicate via growls from her mouth. They would argue with one another with Hitler saying, “People are stupid as pigs. They think it’s all over after death. It goes on.” Judas would counter that by saying Hitler was a “big mouth” who had “no real say” in Hell.

As the sessions continued, Anneliese would speak of “dying to atone for the wayward youth of the day and the apostate priests of the modern church.” Her continual kneeling in prayer caused her knees’ bones to break and tendons to rip. Eventually she stopped eating altogether and on the 1st of July, 1976, she died from malnutrition and dehydration.

Anneliese became a national sensation after her death. Both the priests who performed the excorcisms as well as her parents were charged with negligent homicide. They appeared before court and used the recordings of the exorcisms to justify what they did.

Anneliese During Her Final Days

The two priests were convicted of manslaughter and received a 6-month sentence alongside 3 years of probation. Unfortunately, the jail sentence was later suspended. The parents got off scot free under a criteria of German law claiming having “suffered enough.”

Franz Barthel, a reporter for the regional daily paper. Main-Post, recalled that, “The surprising thing was that the people connected to Michel were all completely convinced that she had really been possessed.”

Barthel added that, “Buses, often from Holland, I think, still come to Anneliese’s grave. The grave is a gathering point for religious outsiders. They write notes with requests and thanks for her help, and leave them on the grave. They pray, sing and travel on.”

While any religious people may view Annaliese Michel as a source of inspiration, her tale highlights superstitions that led to the death of a mentally-ill woman who was not treated with science. It is a story of the projection of people’s hopes, beliefs and faith onto the delusions of an ill woman and preying on her delusions.