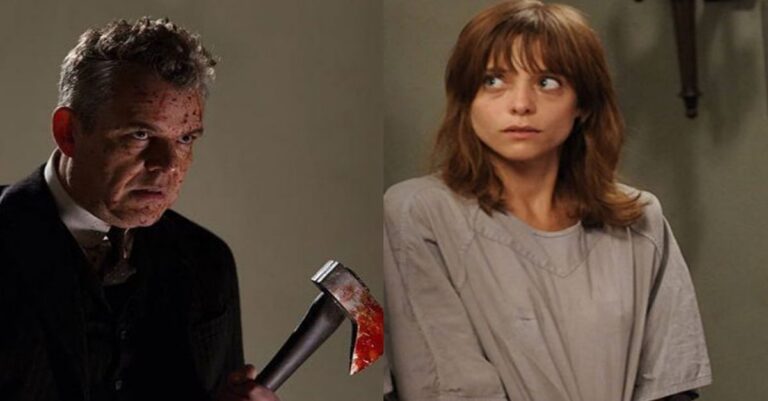 American Horror is one of the very few horror shows out there that still retains the ability to chill you to the very bone. One of the many reasons behind this is because the show incorporates a terrifying slice of reality even amidst all the cinematography. The following list of some of the show’s most terrifying villains who were inspired by real killers is one such example of the realistic factor incorporated in the show.

Season five of the show, Hotel, portrays the character James Patrick March and his haunted Hotel Cortez, in Los Angeles. March makes use of the hotel to hide the evidence of his crimes. The scenario is based on the real-life serial killer H.H. Holmes and his infamous World’s Fair Hotel, in Chicago, which soon was known as the “Murder Castle.” March, quite like Holmes, used his hotel to hide his murders and any accompanying evidence.

Season 2 of AHS, Asylum, involves a scenario where Lana Winters, a reporter, is kidnapped by Dr. Oliver Thredson, a crazy killer. Thredson beheads his victims and skins them. He uses their teeth and skin to make his “Bloody Face” mask and even at times turns his victim into furniture. These crimes are reminiscent of the notorious real-life killer Ed Gein. Gein was also the inspiration behind Leatherface from The Texas Chain Saw Massacre and Buffalo Bill from The Silence of the Lambs. Gein’s property was raided by the police in 1957 and among the horrors discovered were masks made from human faces and furniture created from body parts such as skulls and skin.

Aileen Wuornos and the Table of Serial Killers (Season 5: Hotel)

Season 5’s Halloween episode of the show featured a gathering of murderers all representative of real-life serial killers. The gathering was hosted in Hotel Cortez by James Patrick March. Among those in attendance were the Zodiac Killer, Gordon Northcott of the Wineville Chicken Coop Murders, Lily Rabe portraying Aileen Wuornos, Jeffrey Dahmer, Richard Ramirez: the “Night Stalker” and John Wayne Gacy.

In Season 4 of the show, Freak Show, the most terrifying character makes an appearance – Twisty, the homicidal clown. The inspiration behind Twisty came from the notorious American serial killer John Wayne Gacy. Gacy earned the title of the “Killer Clown” for his habit of dressing up as “Pogo the Clown” for children’s events and parties.

The last season of AHS features plenty of horrifying scenes. One of the most notable ones are the ghosts of Miranda and Bridget Jane, two nurses who pretended to run a nursing home and instead murdered elderly people. These two characters are based on the real-life duo: Gwen Graham and Cathy Wood. In the 1980s, news arose of Graham and Wood killing five women in a Michigan nursing home where they were working as caregivers. Like the fictional character of the show, Graham and Wood turned their gruesome murders into a game by having their victims’ initials spell out the word “MURDER.”

In Season 3, Coven, the character Madame Delphine LaLaurie makes an appearance. The character is inspired by a real-life socialite who share the same name. In the early 19th century, she lived in the French Quarter of New Orleans. At one point her house caught fire and the authorities investigated. Her house was an abode of horrors. She used to mercilessly torture her slaves by tying, caging and chaining them. On the show, the character reenacts these horrors. The only difference is that the character was persecuted for her crimes while the real-life sadist escaped to France.

Lady Gaga’s appearance in Season 5 of the show won her a Golden Globe. Her portrayal of “The Countess,” a centuries-old vampire living in the Hotel Cortez alongside a menagerie of children whose blood she drank was simply stunning. The character was inspired by Countess Elizabeth Báthory, the Hungarian serial killer, who was famous for abducting and murdering young woman by the hundreds. She would bathe in their blood and claim this to be her secret for beauty and youth.

In Season 3, Coven, the Axeman of New Orleans is involved with Jessica Lange’s character. The Axeman was in fact a real-life serial killer who was never caught. From 1918 to 1919, he terrorized the city. On March 13, 1919, a letter which is fabled to have come from the Axeman was sent out in which he claimed to murder that night and only those in whose houses jazz music played would be spared. Everyone left to jazz clubs that day and houses blared the music and thankfully no one was killed. That was the last time anyone heard from the Axeman.

One of the darkest shows on TV, American Horror Story never fails to stun with its incredible plotlines and cast characters. The dark minds of the co-creators Ryan Murphy and Brad Falchuk serve as the perfect generators of the epitome of creepy stuff. The show promises to continue this tradition in the upcoming season, Cult.