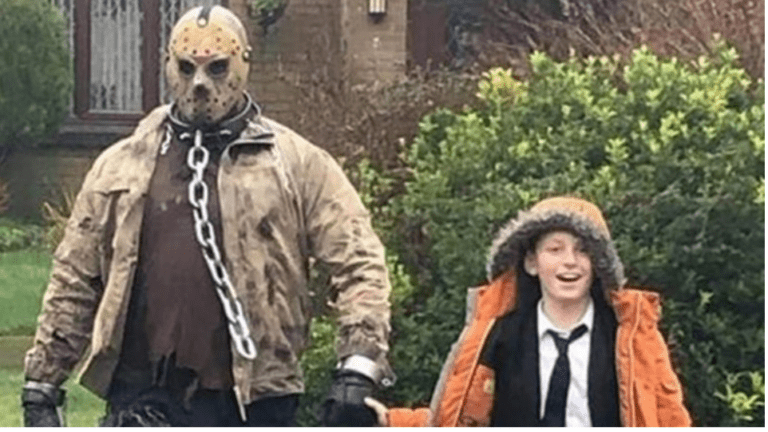 It wouldn’t be every child’s idea of a birthday wish but for one British schoolboy the idea of being collected from school by Jason Voorhees was a dream that came true.

Carter Murphy, 12, who suffers from ADHD and has difficulty maintaining eye contact, is obsessed with the Friday the 13th character, to such an extent that when asked what he wanted for his birthday the horror stars name was his only reply.

Keen to make his son’s unconventional wish come true, Cameron’s father contacted an impersonator and special effects company and arranged for the horror icon to meet his son from school.

Jason who was played by Tony Gartland on this occasion was praised by his father for his insistence on remaining in character throughout. Even going to the story line upholding extent of throwing down a character of his horror movie rival Freddy Krueger when it was presented to him. Now that’s dedication to the cause.

Whilst there have been many on screen victims who would rather Jason hadn’t paid them a visit, this real life drop in clearly meant the world to Cameron

Maybe Jason isn’t such a bad guy after all. Apart from all the killing, obviously…