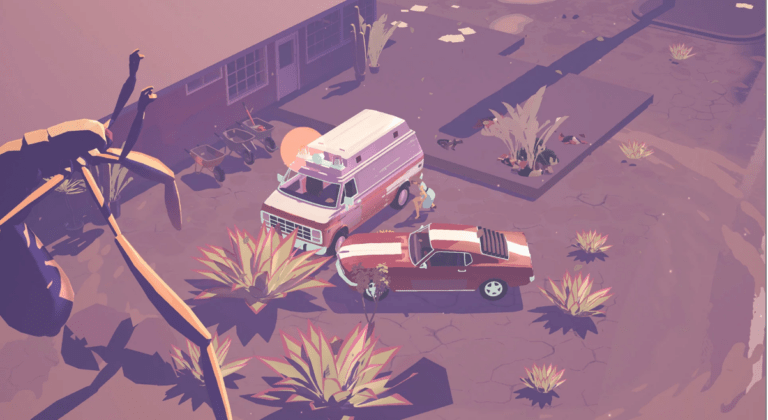 It’s getting worse. I’ve had to do a lot I’m not proud of, lately. They just don’t stop coming for me. I hope they haven’t reached you yet. Please stay safe…

Dead Static Drive, a multi-year development from indie dev Mike Blackney that has been shrouded in mystery recently released its first teaser trailer and it shows a promising glimpse into the unsettling possibilities of the title which is planned for release on Steam later this year.

The gameplay is top down third-person with a Firewatch-esque colour palette which compliments the Lovecraftian themes of the title perfectly.

Penned by many as “Grand Theft Cthulhu ”, Dead Static Drive appears to make sport of the players isolation and fragility with grotesque yet unique behemoths plaguing the players every turn as you try to survive by running, hiding or jumping in a beaten up muscle car. The games features also have the player trying desperately to scavenge and refuel as well as potentially cooperate with other survivors to make it through another day, but you may want to be cautious of everything around you, as Blackney states in an interview “There is freedom in a car, but also danger and isolation. The light of a gas station or a rest stop at the side of a darkened road can be as foreboding as it welcoming.”.

Perhaps the scariest thing that the trailer presents to us about Dead Static Drive (apart from the stellar, piercing soundtrack which is hopefully a sign of things to come music-wise) is that resistance to these unknown and varied enemies is entirely futile. Like the now classic Slenderman original, you don’t play as a pseudo-invincible hero that can fight their way out of the situation, your two choices are run or die, and if Dead Static Drive has its way you’ll be doing an awful lot of both.