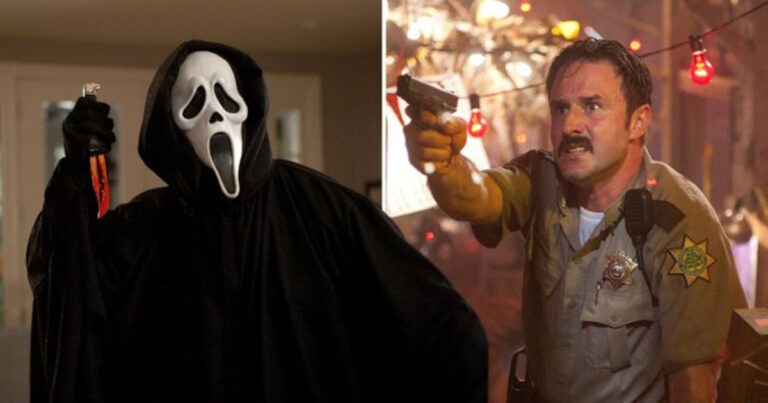 Outside of the primary protagonist or antagonist, there are few horror characters as memorable as the Scream franchises dim-witted officer Dewey Riley. With the franchise seeing an upcoming reboot, of sorts, it didn’t look as though fans of the character would be seeing him again. However, it looks as though Riley, portrayed by David Arquette, will be back returning faster than people may have thought.

The actor, who appeared in all four of the films, has confirmed that he will be one of the leads in the movie, which has just entered pre-production. The news was also announced by Peter Oillataguerre, President of Production for Spyglass Media Group, which will be producing the film and any potential sequels.

While many details of the films still remain under wraps, James Vanderbilt – best known for The Amazing Spiderman and Zodiac – will be the lead writer. Ready Or Not’s Guy Busick will serve as the new Scream film’s co-writer. It’s also been announced that Matt Bettinelli-Olpin and Tyler Gillett, who are also associated with Ready Or Not, will serve as co-directors.

Neeve Campbell, who portrayed lead character Sydney Prescott in all four films to date, is currently in negotiations to return. Matthew Lillard, who was one of the franchise’s antagonists has also expressed an interest in returning, although it’s unclear as to how this would work, given his character’s on-screen death.

Having said that, the franchise is known for its surprises, so it’s within the realms of possibility that he could return. Over the past few years, David Arquette has routinely expressed an interest in returning as Dewey Riley. However, there were consistent delays to productions, alongside cancellations of planned films.

Regardless, the new Scream film looks to start filming later this year. Depending on some scheduling issues, fans might be able to expect a release in time for Halloween 2021.