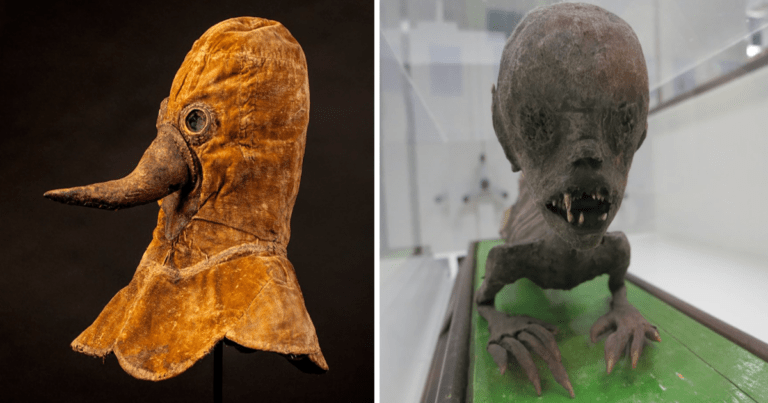 Not being able to get out and visit museums and art galleries due to the lockdown is getting to some people, including the ones that work inside of the institutions, but one curator at the Yorkshire Museum in England had the petrifying idea to challenge other museums to find and share their creepiest pieces, and the results are somewhat overwhelming.

As part of their ongoing #Curatorbattle challenge, this week they tweeted out a picture of a hair bun which was recovered from the burial site of a Roman woman who died in the 3rd or 4th century. “Can you beat it?” they exclaimed and museum workers of the internet surely answered.

Like this offering from Ripley’s Believe It or Not museum, who shared the severed and mummified head of Peter Kurten, otherwise known as The Dusseldorf Vampire who commited at least 9 murders and was executed in 1931.

Hold up! We’d be totally remiss if we didn’t jump on this #CreepiestObject train. We’re way a-head of you with the severed noggin of Peter Kurten, real-life #Vampire of Dusseldorf! ??‍♂️ You can fang us later for the #nightmares. #CuratorBattle pic.twitter.com/7uritZMmIc

Or this so-called mermaid from the Natural Sciences department of the National Museum in Scotland.

We have a little more information about this one: The posterior half was formed from a Pacific wrasse, & the head/thorax were sculpted, with fish jaw inserted in the mouth. #CreepiestObject pic.twitter.com/7MrPcaZqdh

The Deutsches Historisches Museum in Berlin is a strong contender for first place with their contribution of a truly unsettling plague doctor mask from the mid-seventeenth century.

Thanks for thinking of us @HottyCouture and wow, will we be having nightmares tonight with all these #CreepiestObject|s ! Here is the one we just can’t hide from you, one of our many creepy gems – our Plague Mask (1650/1750)! #curatorbattle pic.twitter.com/JrMjqAJSIM

The terror also comes from unexpected places in this competition, with the Toy Museum at Penshurst Place giving us all an eyeful of this drinking bear animatronic, which when fed a two pence piece will drink from its cup while piercing your soul with its unblinking gaze.

Live from the Toy Museum of Penshurst Place, we present the Drinking Bear. Feed it a 2 pence piece and it’ll pretend to drink from its cup as it stares into your soul. #CuratorBattle #CreepiestObject pic.twitter.com/ohNl2974UJ

The Nova Scotia Museum also added a mysterious closeup of their “something in a jar”.

Does “something in a jar” strike your fancy? #CreepiestObject pic.twitter.com/grVWP5hRLw

Lee Clark, a spokesperson for the charitable York Museums Trust said in an interview with the Huffington Post that he was “delighted [that] so many museums from all over the world have shared objects to the threads which have become like global exhibitions of remarkable finds”.

The trust which has reportedly suffered a decline of as much as 70% in revenue due to the stay at home order came about as a way to involve and inform people from around the world in the comfort of their own homes.

Follow along for yourself with #CuratorBattle and #CreepiestObjects and let us know your favorites.