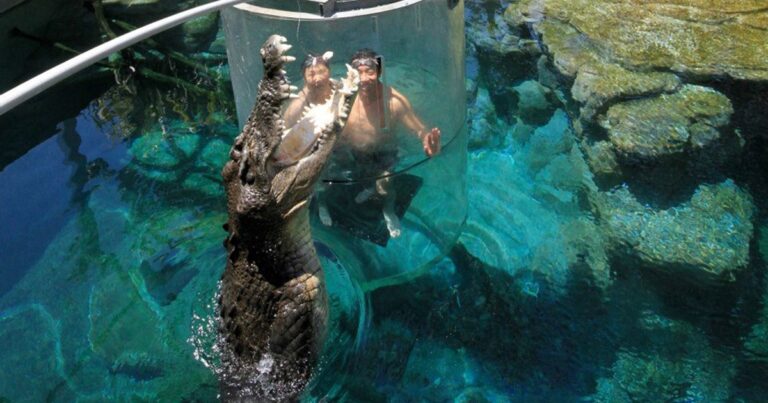 There are a few species of water-based animals that terrify people, with sharks perhaps being the most obvious. Not too far behind them, however, is a saltwater crocodile. Thankfully, few people ever get close enough to be one of their victims. However, Crocosaurus Cove in Darwin Australia looks to change that with their somewhat more domesticated animals.

Naturally, the risk of being attacked or injured by the company’s specimens is relatively low, given that there are a wealth of safety precautions. Despite this, willing customers can jump into a cage and take a dip with the animals. As Croccove’s website notes, the animals are up to five meters, or 15 feet, in length.

Alongside their intimidating size, the saltwater crocodile has a bite force of about three tonnes. Called the Cage of Death, the activity allows customers to stay in the cage and interact with the animal for 15 minutes. Naturally, there are a few terms and conditions, alongside a few restrictions, that apply.

There are 12 daily slots available that customers can book, though some have proven more popular than others. The main reason for this is feeding. At certain times during the day, attendees can sit in the cage as they watch the crocodiles feast similar to how they would in the wild.

Croccove now has five saltwater crocodiles to get into the Cage of Death with; Wendell, Leo, Axel, and William and Kate (named after the Duke and Duchess of Cambridge). When put into the cage, customers will be faced with all five of the animals at the same time, which just adds to the terror of the whole situation. You can find out more on the Croccove website. Some times and dates may be booked out, so potential customers will have to plan ahead.