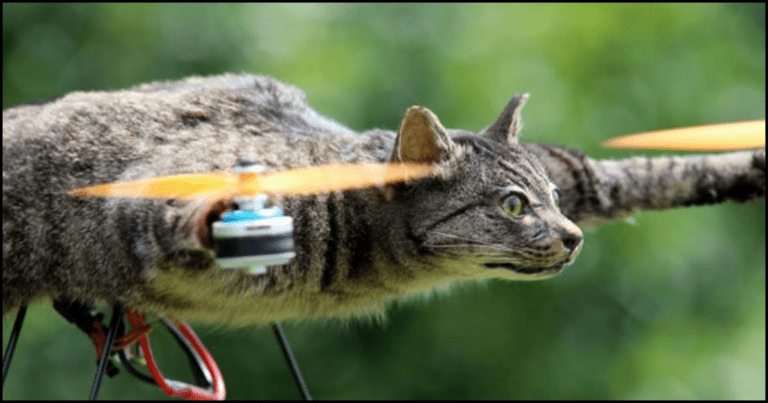 Animals are one of the purest, most lovable things this world has to offer, and no matter whether you’re a cat or dog person, we can all agree that our pets are one hundred percent our family.

Losing a pet is never easy. Some tend to spend time alone mourning the loss of their cuddly best friend, and others buy new animals in a desperate attempt to replace their old ones, but this man used a completely unorthodox technique to move past the death of his cat.

After Orville the cat lost his life after being killed by a car, Dutch artist – Bart Jensen – opted to, instead of breaking down and crying, make something good out of a bad situation and he did just that.

Jensen has always been deeply passionate about flying and aeronautics, so he decided to turn his now deceased and stuffed cat into a flying drone, thus bringing to life the Cat Copter.

Orville was stuffed into a rather creepy horizontal position with his limbs stretched at the same angles as the drone’s propellers.

Inside the body of the cat lies the assembled drone, where the battery can be easily accessed by the owner through the cats abdomen.

While it remains an incredible piece of art courtesy of Jensen, the Orvillecopter continues to divide opinion, and while many see it as a great reaction to the death of a pet, many others look at it in disgust and horror.

However, Orville is not the only animal the Dutchman has made fly.

Below, you can see the bizarre interview in which Bart Jensen reveals his reasoning behind creating the Orvillecopter, and his strange fascination with death.

What are your views on Bart Jensen and the Orvillecopter? Be sure to share your thoughts with us in the comments below.