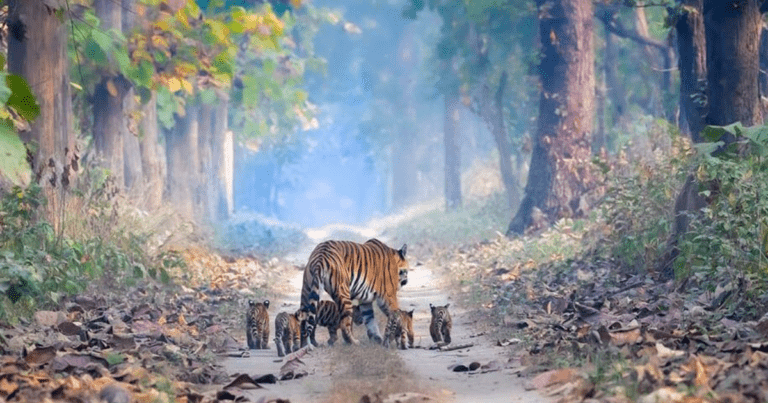 In India, Tigers are a majestic animal of great pride, but unfortunately, the beautiful orange, black, and white cats are getting closer and closer to extinction.

Thankfully, the Royal Bengal Tiger’s population has increased almost 30 percent over the past four years, more than double the amount there was in 2006, according to an ongoing tiger poll.

First reported by Indiatimes, the National Tiger Conservation Authority, or the NTCA, counted close to 3,000 adult tigers in the country.

“Efforts are helping in making this species bounce back from the verge of extinction”, said Parveen Kaswan when referring to the magical photograph of the endangered Tiger and her five cubs, on his social media earlier this year.

The unbelievably beautiful picture that has managed to capture the attention of tens of thousands around the world almost looks like a painting, instead, a real-life masterpiece proving the beauty of nature.

Reported by the BBC, 70 percent of the tiger population resides in India. As well as it being an incredibly secure place as proven by the rapid increase in population, India has managed to double the number of tigers left in this world four years ahead of schedule.

Yet another success story surrounding Earth’s beautiful wildlife. Since worldwide social-distancing has been put into place, we have seen a surge of animals growing in bravery and courage as they can be found walking around empty streets and neighborhoods.

In case you missed it, go over and watch these Penguins Strolling Through The Street During Lockdown.

If that’s doesn’t interest you, make sure to go and check out these Lions Relaxing In The Empty Streets Of South Africa.

Lastly, you can navigate over to see the Yosemite National Park Full Of Animals During Human Absence.

Did the picture of the Tigress and her cubs bring a smile to your face? Let us know your thoughts in the comments.