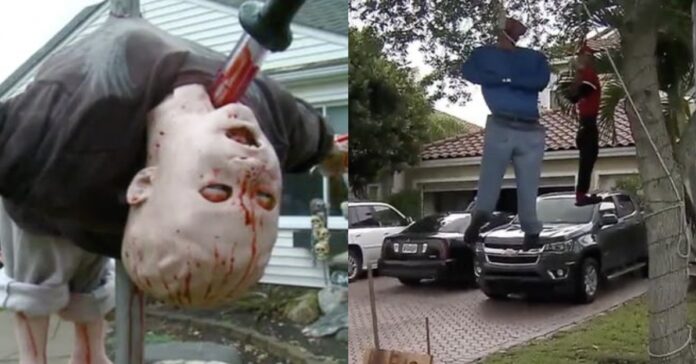 When it comes to Halloween decorations, everyone wants theirs to stand out more. Whether it is DIY or décor items that came from the store, there is a plethora of unique and innovative design ideas for decorating during the holiday season. However, some people’s Halloween decorations went a tad too far and crossed the line.

The following list of some of the more popular inappropriate décor ideas is an example of how far people can go. The holiday season craze and the festive cheer does not come as a handy excuse to justify these Halloween decorations at all.

Home Depot ended up removing this scary Halloween decoration off of shelves. Titled the Scary Peeper, one look at it is enough to terrify you out of your wits.

A family in Ohio decided it was a great idea for Halloween decorations to put up bloodied life-like bodies which were impaled on poles and skewered with needles. They eventually took them down after strangers started visiting them late at night.

In New Jersey, a man put up Halloween decorations of ISIS terrorist mannequins torturing people. One of the mannequins was even dressed as a US soldier. The display was far too violent that news outlets blurred out the images when covering footage.

A lawn featured the gory display of a bloody crib with demonic baby dolls inside. The dolls appear to be gnawing on human body parts.

Too Realistic For Decorations

The following death scene appeared too real for the neighbors to not call the police to investigate. There’s no telling what this family was thinking.

A Halloween decoration at a fundraiser for a Boy Scout Troop raised questions and outcry as it featured a life-sized dummy dressed in a prison’s orange jumpsuit. The dummy had a sack over its and it sat in an electric chair awaiting execution.

A Halloween display featuring Obama being hung from a noose, hanging outside a gas station was shared by R&B artist Akon on his Instagram.

A racist display of Halloween decorations involved the dressing up of a skeleton in a confederate flag. The skeleton was then hung from a tree.

Skeleton In Sombrero Being Hanged

A skeleton draped in a serape and sombrero was spotted by neighbors hanging from a noose. The display was found to be highly offensive.

The graphic and realistic display of a dismembered head of a woman alarmed and disturbed neighbors. The gory display was put up as part of Halloween decorations.

A Halloween decorations’ display in Detroit drew public attention due to its controversial nature. The décor featured real life controversies such as police violence and terrorism.

A Pittsburgh man decided the ideal way to go about Halloween was to litter his yard with gory displays of bloody baby dolls and human body parts.

In Miami, a local family’s Halloween decorations of hanging bodies caused angry neighbors to react. The display was termed racist and the family was requested to take it down. However, the family prevailed and stated that it was all just “Halloween fun”.

A family decided to take down their Halloween decorations when police arrived at their place due to reports from neighbors. The display which features bloodied baby dolls was deemed offensive and prompted the family to take it down (and instead replace it with Christmas décor… three weeks before Halloween even began).

A Halloween display went wrong, prompting neighbors to believe it was a lynching that went wrong. Needless to say it caused a stir and raised questions. The creators of the décor came forward and stated lack of mal intentions exclaiming that the Halloween decorations had simply gone wrong.

A lot of people may argue that nowadays everyone appears to be getting offended over something or the other. However, one should know when to draw the line even when it comes to fun and games. The Halloween decorations were definitely far from harmless fun and bordered the line on inappropriate and insensitive.