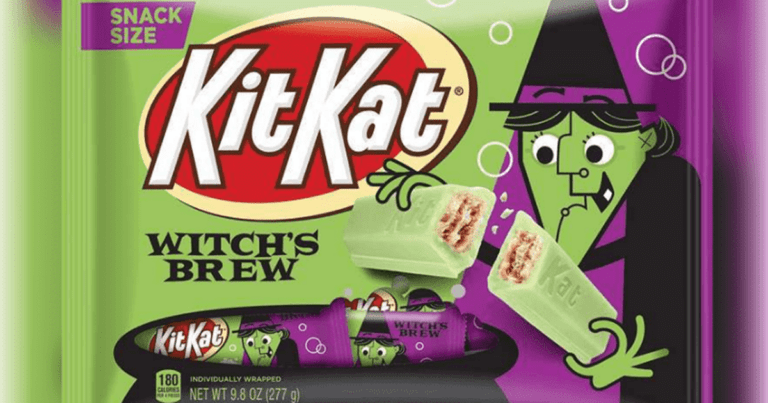 With Halloween getting ever-closer, more and more companies are releasing limited runs of products centered around the holiday. Kit Kat is one of the more recent of these, as it’s launching a Witch’s Brew bar. The bar is similar to the original Kit Kats, although the exterior is pale green.

Alongside this, reports suggest that it is marshmallow flavored. Coupled with the crunch of the interior, the bar looks set to be a pleasure to eat. The wrapper is also green and purple to further add to the witch and Halloween aesthetic. Hershey’s, the company behind Kit Kat, has released countless flavors of the years across all of its brands.

However, this is the first time that it’s released a marshmallow flavor. Based on how people are reacting to the Witch’s Brew online, it appears as though Hershey’s got the flavor right on its first go. Kit Kat began releasing the bar across the United States in the middle of July. However, it saw quite a limited rollout.

This was initially to test the bar before being rolled out further more recently. As such, it looks as though the bar will have a mass-market release in the coming weeks. Alongside the bar itself, the flavor is being released in 9.8-ounce bags that are available for $3.89. However, this isn’t the only Halloween-themed product that the company is releasing.

Kit Kat is also re-releasing its orange pumpkin pie-flavored bars in the coming weeks. These have been released on several occasions in recent years during the build-up to Halloween and were met with a lot of success. This could have inspired the company to continue looking into Halloween-inspired flavors and eventually release the Witch’s Brew.

The bars are available across the United States and should be the perfect treat for Halloween.