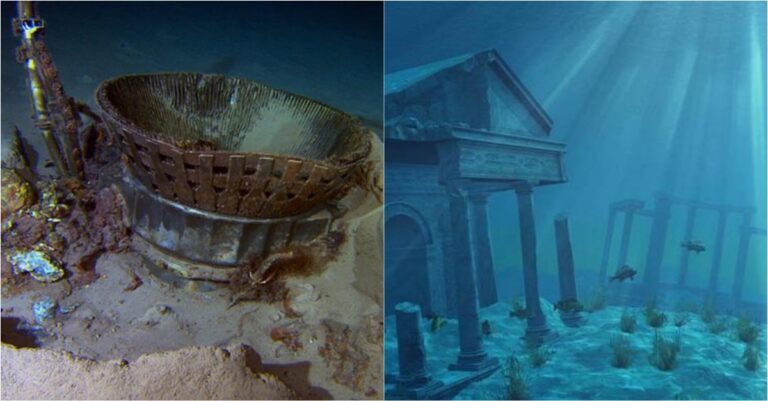 In 2000, the National Oceanic and Atmospheric Administration stated that 99% of the world’s ocean floors and 95% of the world’s oceans are still unexplored. While that leaves far too much room for mysteries and treasures, there are a few items that explorers have come upon which will shock you. The following are a collection of 10 of the most mysterious and weird items which turned up from ocean floors.

In 2003, a circular stone of unknown origins was found in the Sea of Galilee. Made of basalt rock and weighing 60,000 tons, it is twice the size of the real Stonehenge. The formation and function of the stone remain unknown. However, some scientists believe that the place could have been an ancient communal burial site.

The Lost City of Heracleion

In the 2nd century BC, an ancient Egyptian city named Heracleion vanished. Over 1000 years later, in the early 2000s, remnants of the lost city were uncovered 46m deep in the Mediterranean. Archaeologists first discovered gold coins and then five-meter statues. Next, 64 ships were found in the drowned city. Scientists have yet to conclude what led the city to sink in the first place.

One of the oldest known complex gear mechanism is the Antikythera Mechanism. Although for thousands of years it has remained buried in the ocean floor, it is still in relatively good condition – good enough for scientists to gauge its function. Also called the first analog computer, scientists believe that it was designed to foresee solar and lunar and solar eclipses. It was discovered in 1900.

At the bottom of the Baltic Sea in 2012, a Swedish diving group stumbled upon an unknown plate. Some are referring to it as the “New Stonehenge” as it is unclear what it represents precisely. Plenty of conspiracy theories surround the phenomenon quite akin to the real Stonehenge. Some people share the belief that extraterrestrials placed the plate in the depths of the ocean.

Scientists have discovered another ocean beneath the surface of the ocean. The hidden ocean was found 250 – 400 miles beneath the surface of the Earth, under a layer of ringwoodite mineral. Ringwoodite is famous for its ability to store water at high temperatures in its molecular structure. More interestingly, the oxygen stored in this layer does not exist in gas, liquid or solid state of matter.

A robotic submarine by the University of Leeds discovered a deep sea channel flowing along the Black Sea’s bottom. This river looks identical to any river above the ground complete with waterfalls and trees.

Life Against All Odds

Recently, scientists have come upon live microbes in the darkest pits of the ocean. Dating back to the Jurassic period, these microbes are approximately 86 million years old.

Since 1969, remnants of the spaceship that took the first astronauts to the moon, Apollo 11, have been lying at the bottom of the ocean. In 2013, when Jeff Bezos of Amazon took a deep sea dive, he stumbled upon the components of two F-1 rocket engines from the spaceship.

A company named Advanced Digital Communications in 2001 discovered an underwater city which takes up almost 1.2 square miles of ocean floor. It was found 2,000 – 2,500 feet below the surface. It is believed to be almost 50,000 years old. Scientists believe that the structures are all manmade which would make them the most technologically advanced structures at the time.

Although 10 may be an inconsequential number in comparison to what lies hidden in the watery depths of the world’s oceans, it is a start. What would you do to learn more about the mysteries lying in wait beneath sea level?