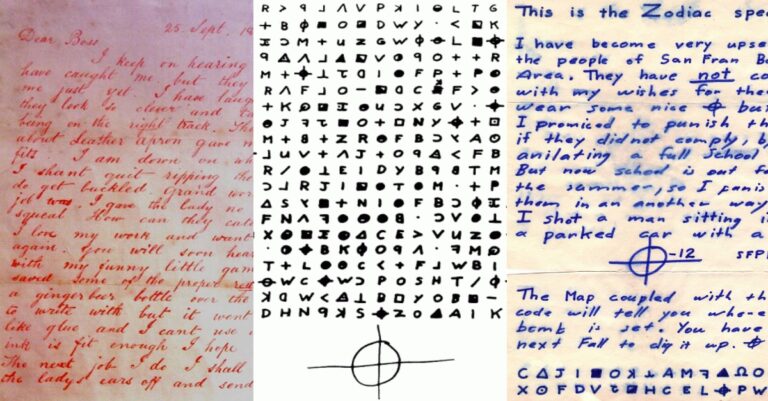 Serial killers are known to be secretive, silent, and take their victims by surprise. They work in the shadows and sometimes leave little to no evidence of who may have committed the crime, making it sometimes difficult to figure out who exactly murdered victims. But, there are some serial killers who like to get crafty with their work and go the extra mile to taunt and harass communities by writing letters. They write letters to make police go on chases to try to identify who the person is behind the letters, but some still remain at large.

This list of letters that were sent by serial killers are some of the most chilling letters you will ever read. They have caused distress throughout communities and have left police and other authorities at multiple dead ends. 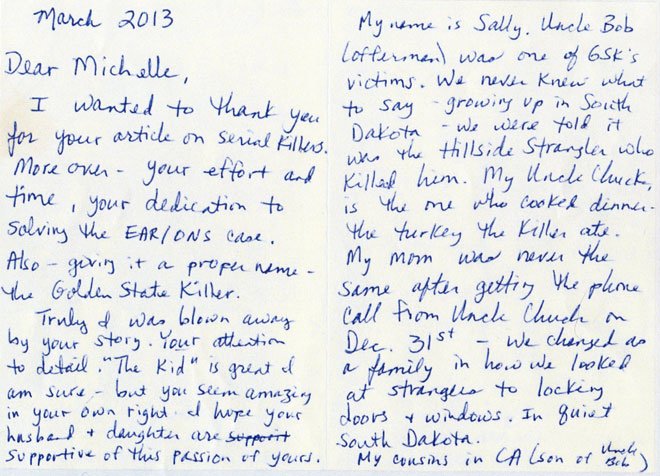 A letter from the Golden State Killer.

This name was coined to the unknown individual who was called The East Area Rapist and The Original Night Stalker. This person was given a plethora of names because there was a great decision they made to move across California, change their M.O. of violent acts, and continue on with their spree from 1976-1986. The changes this perpetrator made were so drastic that police officials were unaware that it was the same person committing the crimes until there was a DNA connection in the year 2000.

This particular killer is notoriously known to conduct high surveillance on his victims and thoroughly plan out attacks against them before he took any type of action. It got to the point where the GSK would go into the homes of their victims while they were away and plant a few objects and tools around their home weeks prior to their attack.

In 1977, a creepy letter was sent to the Sacramento Bee. This letter was supposedly written by the Golden State Killer and they titled it, “Excitement’s Cave”. Within the letter, the author wrote about how there was some type of cinematic portrayal for the crimes they have committed and that they weren’t afraid of “tough looking men”, since they did attack couples at random times. Instead of being afraid of these men, the killer viewed them as victims. Here are just a few lines from the letter the killer wrote:

“To make a movie of my life
That will pay for my planned exile.
Just now I’d like to add the wife
Of a Mafia lord to my file.” 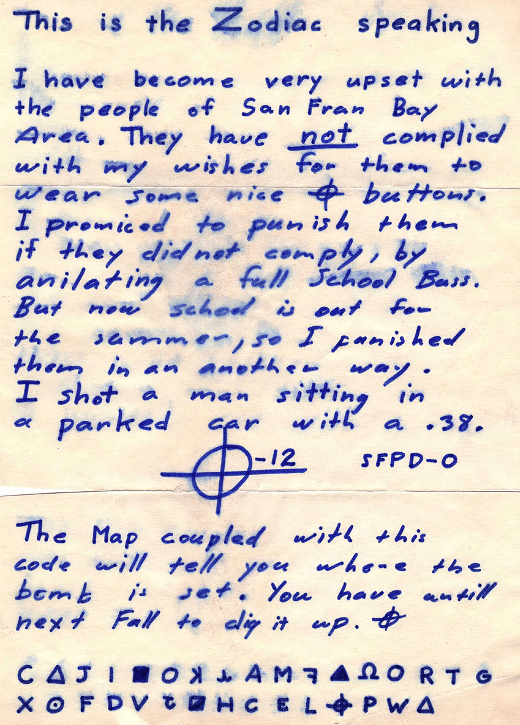 One of the letters from the infamous Zodiac Killer.

Image via: Letters of Note

This is probably one of the most famous serial killers of all time. The identity to this killer has never been identified and to this day people STILL can’t crack the case. His letters were haunting and terrifying, making people fret every time they heard of another letter being released to the public. No one knows if the actual proclaimed killer wrote these letters or if another person did it, but the debate was settled on October 13, 1969. The night before, a cab driver had been shot in San Fransisco and the newest letter from the Zodiac Killer had a piece of the cab drivers bloody shirt in it.

This is also the exact same letter the killer threatened to make his attack against a school bus by shooting out the front tire so the bus could crash. He continued to describe that he was going to “pick off the little kiddies as they came bouncing out”. People around the nation went into a huge panic because they had no knowledge of what school bus the killer was talking about and if he was actually going to follow through on his plan. Thankfully, this event never happened, making parents feel a little more at ease about their children going to and from school.

People exclaim that some of the most chilling information of all about the letters was that the killer claimed that he could elude police as they were searching for the killer after the cab driver was murdered. The killer said that the cops were goofing around more than trying to find the killer. Here is an exert from the letter:

“The S.F. Police could have caught me last night if they had searched the park properly instead of holding road races with their motorcicles seeing who could make the most noise. The car drivers should have just parked their cars and sat there quietly waiting for me to come out of cover.” 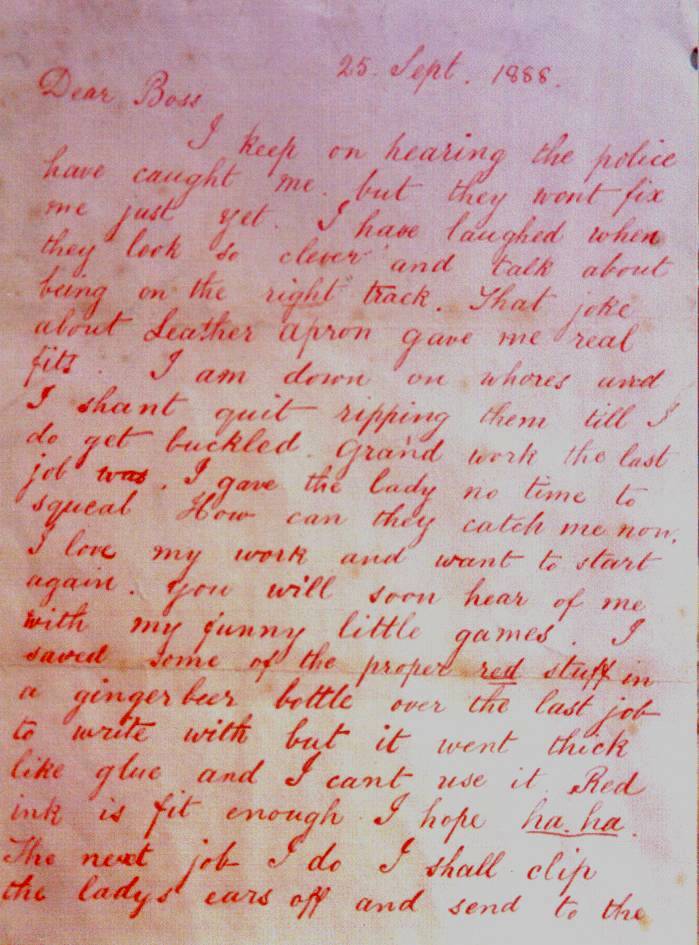 A letter titled “Dear Boss”, written by Jack The Ripper.

Jack The Ripper is one of the most infamous names out there in the serial killer world. He is known to have murdered and mutilated 5 prostitutes in Whitechapel District of East London in late August and early November in the year 1888. He has been deemed unidentifiable ever since the murders occurred and police were desperately trying to find who committed the murders. The infamous killer got his name when the police received a letter from him and at the bottom it was signed “Jack The Ripper”. However, police from that time and criminologists today believe that the letter is a fraud and may have been a work of a journalist who was trying to juice up the story for the community.

Actually, every letter that Jack The Ripper sent had the suspicion of being written by kooks and trolls instead of the actual killer-except for one letter in particular. This letter is called “From Hell” has been proven to have the strongest case of authenticity of the killer, even though no one could still prove it was the actual killer.

This letter was post marked on October 15, 1888 and was addressed to George Lusk, whom was in charge of the Whitechapel Vigilance Committee. With this letter, though, Lusk received another surprise. There was half of a kidney with the letter from the supposed fourth person Jack The Ripper murdered and after medical examination, they were able to confirm this was in fact the kidney from the fourth victim. What was even more disheartening to read was that the author of the letter wrote in detail about how he made a meal out of the other kidney from the woman:

I send you half the
Kidne I took from one women
prarsarved it for you tother pirce
I fried and ate it was very nise I
may send you the bloody knif that
took it out if you only wate a whil
longer.

signed
Catch me when
you Can
Mishter Lusk.” 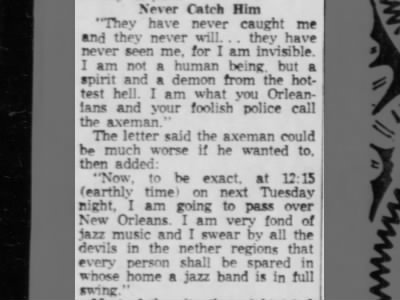 The infamous letter of The Axeman.

The Axeman rose to fame during May 1918 to October 1919 by running around the city of New Orleans, and surrounding communities, and killing people with an axe. He was a vicious and horrible serial killer who enjoyed breaking into homes in the middle of the night by kicking down the back door or smashing a window. From there, he would ransack the house in hopes of finding an axe somewhere but if he couldn’t find his favorite weapon, then he would search for a razor to complete his mission. After finding a weapon, he would creep up the victims rooms and hack/stab them in their sleep.

Halfway through his spree in 1919, a letter on March 13th was published in several New Orleans newspapers that was supposedly written by the Axeman. In the letter, the Axeman had a large list of threats for New Orleans and the upcoming attacks he was planning to make to the community. However, if a jazz-band was performing by homes on the nights/days of attacks, they would not be harmed in any way. No attacks were made that night, thankfully, but the letter showed that whoever the killer may be lacked remorse and was encouraging more violence from the people and inside of the communities. Here is an exert from one of his letters:

“Undoubtedly, you Orleanians think of me as a most horrible murderer, which I am, but I could be much worse if I wanted to. If I wished, I could pay a visit to your city every night. At will I could slay thousands of your best citizens, for I am in close relationship with the Angel of Death.”

Cryptography from the Zodiac Killer.

We already talked about the letters that were sent out on behalf of the Zodiac Killer, but what was even more fascinating, and creepy, in this case was that the Zodiac Killer sent out letters that were completed coded. They were mailed to three major Bay Area newspapers that were with a single cipher. The author of the letters threatened the newspapers that he would go on an all-night killing spree if they did not make his coded messages the front page of their papers. Fretting for their life, the newspapers made sure the coded letters were on the front page of all of their newspapers, but no one could figure out what the message said. Finally, a week after being published, a school teacher decoded the message:

“I LIKE KILLING PEOPLE BECAUSE IT IS SO MUCH FUN IT IS MORE FUN THAN KILLING WILD GAME IN THE FORREST BECAUSE MAN IS THE MOST DANGEROUE ANAMAL OF ALL TO KILL SOMETHING GIVES ME THE MOST THRILLING EXPERENCE IT IS EVEN BETTER THAN GETTING YOUR ROCKS OFF WITH A GIRL THE BEST PART OF IT IS THAE WHEN I DIE I WILL BE REBORN IN PARADICE AND ALL THEI HAVE KILLED WILL BECOME MY SLAVES I WILL NOT GIVE YOU MY NAME BECAUSE YOU WILL TRY TO SLOI DOWN OR ATOP MY COLLECTIOG OF SLAVES FOR MY AFTERLIFE. EBEORIETEMETHHPITI”

These are by far some of the most unsettling messages people have ever seen. They made news instantly when word spread of these threatening letters and people tried to personally solve the case but came up with no suspects. To this day, the authors who wrote these letters are unknown and the cases for the killers have gone cold.