Freaked DISCOVER THE ART OF PUBLISHING
Home Horror News Saint Maud: A24’s New Film Compared to The Exorcist, Under The Skin and Carrie 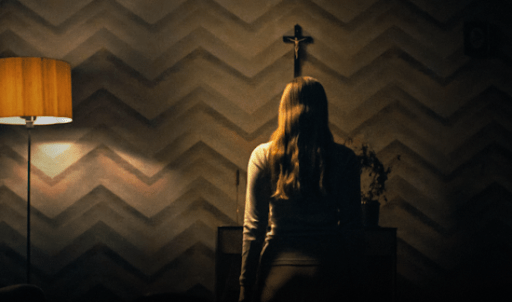 Those folks from A24 are at it again. After chilling audiences and pleasing critics with their releases Hereditary and Midsommar the company is back with a religiously flavored slice of horror that has drawn comparisons to such luminaries of the horror genre as Under The Skin, Carrie and even The Exorcist.

St Maud which was first screened at 2019’s Toronto Film Festival is the debut film from writer-director Glass and stars welsh actress Morfydd Clark, whom horror fans may remember from her roles in 2019’s alligator creature feature crawl and the recent BBC/Netflix adaptation of Dracula.

Centered around a nurse (the eponymous Maud) who works in palliative care, the plot follows the possibly damaged Maud as she struggles to reconcile her faith with her experiences with new patient Amanda, a former dancer with little patience for Maud’s straight-laced devotion. Speaking of laces, there is one shoe based scene featured in the trailer that is sure to make most audience members wince long before they see the actual movie.

Shocked by and struggling with Amanda’s lack of reverence and faith, the possibly delusional  Maud becomes convinced that her charge is possessed and that it is up to her to help save her patient’s soul. Described as part body horror, part possession movie, the critical consensus has been very positive and if A24’s track record is anything to go by, this should be one to look forward to.

You can check out the trailer here