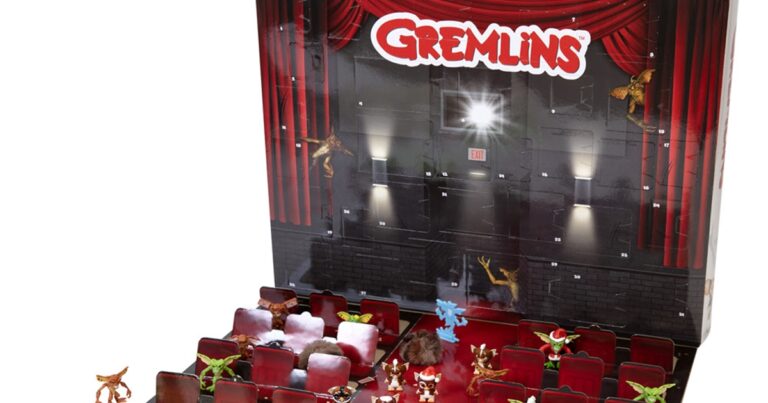 Plenty of people have argued about whether Gremlins is a Halloween movie or a Christmas movie. While some believe that it falls into one section or the other, others believe that it’s a bit of both. Despite this, few people would expect there to be Christmas merchandise inspired by the film to be released.

However, that’s proven to be the case, as Jakks Pacific is releasing an advent calendar featuring characters from the film. The calendar itself is designed to look like to movie theater from the franchise, with there being several one-inch figures coming with the box. These stem from the first two films in the franchise.

This includes some fan-favorites, including Stripe and Gizmo. Based on reports, it seems as though the one-inch figures will be divided relatively equally between Mogwai and Gremlins. With there being 31 slots to be opened, there’ll be quite a few of the characters to appreciate.

You can pre-order the advent calendar here to avoid disappointment when they start to ship, as they’re expected to sell out fast.

The company is releasing a few other film-inspired advent calendars over the next few weeks. Elf, directed by Jon Favreau and starring Will Ferrell, is perhaps the most notable. For more information click here.

However, Elf is also getting a talking plush featuring Ferrell’s face. The 12-inch Buddy the Elf is similar to classic toys in that owners will have to pull a chord to make him talk. This could be a throwback to some of the toys on the market when the film was initially released. Its head has is also sculpted vinyl and looks much more like Will Ferrell than many people would have thought.

Entertainment Earth has started taking pre-orders of the Gremlins advent calendar this week, although it’s expected that it ship in August. As such, fans of the franchise shouldn’t have to wait long before enjoying the one-inch Lightning Gremlin.