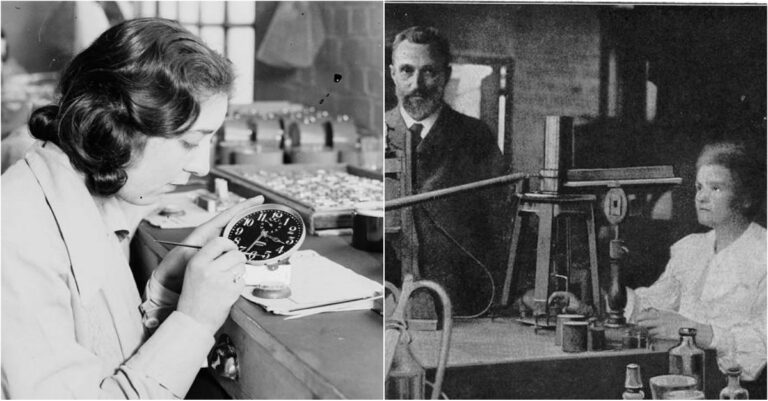 In 1917, during the war, a large warehouse complex in Orange, New Jersey hired scores of patriotic girls. With ridiculous pay (about 3 times the average wage of a working girl), the girls counted themselves lucky for the light work they had to do.

The main task was to paint the faces of instrument gauges, clocks and wristwatches for the company United States Radium Company. A thin layer of white paint infused with the element radium, was applied on the dials allowing them to flow in the dark. This made it easier to tell the time at night or when in trenches.

The men who worked there were supplies with lead aprons to protect them from radiation whereas the women were not given any. The “radium girls” were told that the paint was safe to handle and even told to lick their brushes in order to get a fine point for detailed work.

No precautions were taken at all as the girls handled and ingested the radioactive poison in ominous amounts.

Although Marie Curie and Pierre discovered radium in 1898, it was until 1910 that Marie successfully isolated a singular sample to work with. In 1917, the radium paint was a novel invention.

The couple were aware from the start that radium was a dangerous discovery. Having suffered multiple unpleasant burn from the improper handling of radium, Pierre even mentioned that sharing a room with a kilogram of radium would probably burn his skin off and blind him.

During the time, the conventional wisdom prevailed that a little radium was good for the health. Hence, during the 20th century, radium infused tonic water, radium cosmetics and radium toothpastes were all the rage.

When mixed with the proper paint, radium would turn luminescent after being exposed to light. So when a watch’s face was painted, during the day it would soak up energy and during the night it would stay visible.

The Dangers Of Radium

Radium-226 is the only stable isotope of radium with a half-life of 1,600 years. Any sample of radium, on the other hand, emits alpha particles for as long as it lasts.

In ordinary circumstances, in small doses alpha radiation is harmless. Basically, as long as it is outside of the body, it is safe as the low-energy particles are incapable of penetrating even the skin.

However, if ingested, once inside the body, it destroys living cells in its wake. The element’s atoms work like batteries causing a warm glow. The radium atom is struck by light photons which bump its electrons into a higher orbit.

One it is dark, these electrons drop into lower orbits spontaneously, emitting photons and a particle as they go. Once radium passes human cells in the blood stream, it transforms into a machine gun which lodges into the tissues.

Next, the radium emits particles in close succession which mutate and kill the cells around.

The Work Of The Radium Girls

The reason behind why men were allowed lead aprons and the girls were not, was because the handles large amount of raw material whereas the girls worked with small amounts. They handled the paint carelessly and for many years their practice continued.

The paint was all over the girls and their skin and clothes would glow once they reached home. But, because they were told it was safe to handle, they went one step further and would paint their nail, sprinkle flakes into their hair and even apply it to their teeth in an effort to “give their kiss a pop”.

For multiple years, working at the radium plant was encouraged and by 1920, huge families worked there. At peak operations there were a total of 300 girls at work.

In January of 1922, Mollie Maggia was the first radium girl to report an ailment: toothache. She visited the dentist who pulled out her molar. A couple of weeks later, another molar had to go. Neither radium-jawwounds healed and they seeped blood and pus into her mouth. Eventually more teeth needed to pulled out.

In May, Mollie’s dentist suggested surgery to remove what he believed to be a fast-growing abscess in her jaw. Upon opening the gums, he witnessed ashy and gray bone. He prodded it with a finger and the entire bone crumpled like ashes.

Mollie’s entire left jaw was dug out with only his fingers. The radium had perforated the bone cells and stripped them from calcium. By the summer, Mollie’s jaw came out alongside pieces of her inner ear. In September 1922, Mollie Maggia died.

The tumors grew into her jugular vein, flowing her throat with blood and choking her to death. Soon enough all forms of odd symptoms began showing in the radium girls.

Some develops throat and skin cancer while others suffered from cataracts, hair loss and loose teeth. One of the girls suffered a complete vertebral collapse.

Although radium was known to be dangerous at that time, no one was experienced in radiation sickness. Mollie’s death was attributed to syphilis and the company used that once the lawsuits and accusations began pouring in.

By 1925, Harrison Martland himself studied the issue. He started by reopening Mollie Maggia’s case. As Medical Officer of Essex County, Martland hired competent medical examiners to go over the body once more.

Mollie’s corpse showed no signs of syphilis. On the contrary, it had clear signs of being exposed to radiation. The other girls who passed away showed similar results. Eventually, the USRC ran bankrupt after the massive costs of court and medical bills came rolling in.

The radium girls received vindication far too late. Most of them died and the ones who lived suffered from various diseases, cancers, lost teeth and weakened bones. Some of the girls were compensated after a long and ugly court battle. From Olympia, Washington, Mabel Williams is the last of the surviving radium girls. She had worked for USRC at the age of 16 and in 2015, she was 104 years old.

In the 1930s, Dr. Martland’s work garnered attention and multiple research institutes approached him for advice regarding the safe handling of elements such as plutonium and uranium.

In 1942, University of Chicago physicists successfully established a chain reaction. The Manhattan Project produced multiple atomic bombs three years later. The US Atomic Energy Commission, for decades onwards, credited the research and experience gained in the USRC shop. They helped come up with safety and handling protocols which ensured the safety of thousands of young war workers during World War II.