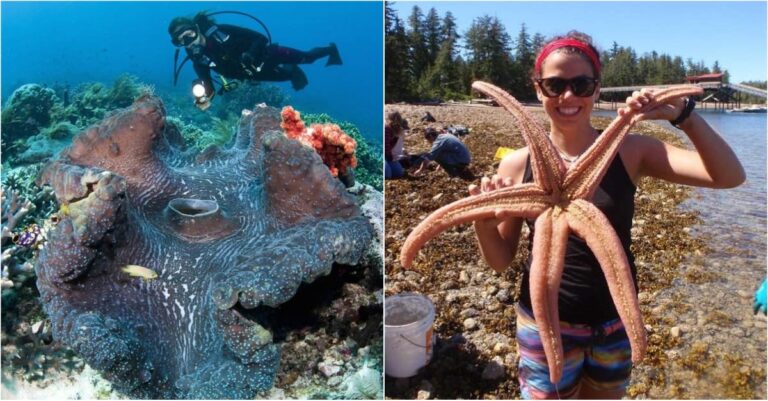 While most of us around the world are used to seeing cats, dogs and pigeons roaming the streets, such is not the case with everyone. Some people living in different parts of the world see absolutely horrifying animals and creatures on a daily basis. It is as common in their countries as cats and dogs are to ours. Have a gander at 20 horrifyingly enormous animal species to believe that they are real.

The African Land Snail is usually found in sub-Saharan Africa. However, you can find the species in other parts of the world, too. They are considered pests to their voracious appetites. Some people even eat them.

The Atlas Moth lives in Southeast Asia and its wingspan goes up to 12 inches. The moth stops eating once it reaches adulthood but that does not stop it from growing.

Out of the 70 known species of Weta, only 11 of them are classified as giants. They grow up to 4 inches in length.

The Giant Pacific Octopus can change colors and camouflage itself. The size is 15 feet and 50 pounds in weight, but, some specimens grow even larger. It is capable of interaction with humans and it loves to play.

The Giant Clam measures up to 4 feet and is easily the largest of its species. The clam is known to locate a cozy spot on the Indo-Pacific seabed and remain there until it dies.

In the southeastern United Stated, the alligator snapping turtle lives in lakes, swamps, and freshwater river. It can grow up to 26 inches in length and 75 pounds in weight. It looks vicious has a “lure” on it tongue which resembles a worm. It aids in catching prey such as fish and frogs.

The Pink Sea Star is native to the Northeast Pacific and reaches up to 2 feet in length. It preys mainly on shellfish and retains the ability to turn its stomach inside out via the mouth. It uses this technique to surround its prey to trap it.

The largest amphibian on earth, the Chinese Giant Salamander grows to 6 feet long. It lives in lakes and streams in China and preys on fish, crab and millipedes.

This bony fish weighs about 5,000 pounds and feeds off of jellyfish. The Sunfish is harmless to humans and resides in a wide-ranging habitat.

Native to Southeast Asia, the large flying fox feed on fruits and nectar. It has a wingspan of almost five feet long. It relies on eyesight rather than echolocation to find its way.

Growing in length over 6 inches long, the Titan Beetle has powerful jaws that can cut through a pencil. These South American beetles don’t prey but their grubs feed on rotting wood.

The Mekong Catfish is native to the Mekong River in Southeast Asia and is an endangered animal. It feeds on microscopic animals. It can grow to 10 feet in length and 650 pounds in weight.

Nomura’s jellyfish can weigh up to 450 pounds and grow over 6 feet in diameter. The growth period of this creature is only 6 months. It lives in the seas of Korea, Japan and China.

The Giant Freshwater Stingray can grow to 16.5 feet in length and weighs 1,320 pounds. It is native to the rivers of Northern Australia, Thailand, New Guinea and Borneo. It is an endangered creature.

Native to the forests of Ecuador, the giant earthworm can grow to 22 feet in length.

39 inches if the approximate length of the gigantic sea slug also known as the Black Sea Hare. It is commonly found on the eastern Pacific. Seaweed and kelp makes up for the majority of its diet.

The habitat of the Goliath Frog is western Africa. It feeds on anything that fits into its mouth. It can weigh up to 7.2 pounds (the equivalent of a pet cat).

The leg span of a Coconut Crab is over 3 feet and its claws are powerful. It is known as the largest land-dwelling arthropod and it lives off of coconuts and fruits in the tropical Indian and the Pacific Oceans.

The Giant Isopod is related to shrimps and crabs. It can be found in the Indian, Atlantic and Pacific Oceans.

The Giant Millipede may look fierce but it feeds off of melons, apples, tomatoes and other forms of vegetables and fruits. It can grow up to 15 inches in length and has 256 legs.

These miracles of science are nothing less than fearful and terrifying. Although many of them do not pose a serious risk to humans and are even edible, simply spotting one of these creatures will make your skin crawl. It is better for you to keep an eye out for them if you ever visit the places they are known to inhabit.